The 20-year Demise of a Blue State 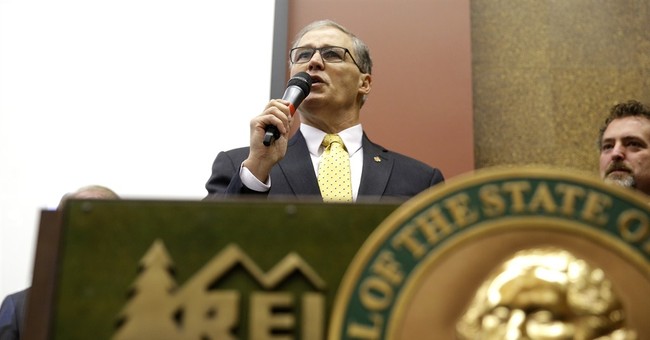 I left Washington state about 20 years ago for Arizona. A Washington native, I had become fed up with the left-wing politics of Seattle. A couple of years ago, I moved back to the Pacific Northwest. A lot had changed while I was gone, and very little for the better. The only “improvement” I noticed was more greenery everywhere. The environmentalists had gotten so many restrictions passed on logging and burning dense forestation that the Evergreen State had started to look like a jungle.

Everything else had gone downhill. The roads and traffic had become horrendous, especially in the Puget Sound area around Seattle, since there was no longer enough money to keep up with maintenance and expansion, and the left-wing politicians had prioritized mass transit over road infrastructure and planning. This is despite the fact that Washington has one of the highest gas taxes in the country, resulting in high gas prices. Republican legislators in the state side with the Democrats on many issues, including higher taxes for education and gas. Legislation is now being considered that would tax drivers per mile. Seattle has the eighth worst traffic congestion among large U.S. cities, even though it is only the 22nd largest city. Consequently, drivers have lost their reputation for being the nicest in the nation.

Driving in downtown Seattle is dreaded as much as driving in larger cities like Washington, D.C. and New York City due to congestion and parking. The Alaskan Way Viaduct replacement tunnel, which has been under construction in downtown Seattle since summer 2013, making traffic a nightmare, was never approved in any general election or referendum, and has been the subject of multiple lawsuits. It is scheduled to be completed in 2016, but no one believes it will on time due to unions, and it is frequently compared to Boston’s corrupt “Big Dig.”

The state has become downright hostile to business. Although there is no corporate tax, the state makes up for it with a business and occupation tax. There are a few large tech companies left, including Microsoft, Amazon, Nintendo, Zillow and Expedia, but that is only because the legislature bends over backwards to appease them. Microsoft recently laid off 3,000 employees. Boeing has been gradually relocating to other states, starting with moving its corporate headquarters to Chicago. It is currently in the process of cutting 1,500 tech jobs in Seattle and relocating them to Missouri and South Carolina.

By the year 2000, almost all of Washington’s statewide offices and Congressional delegation were controlled by Democrats, primarily a result of left-of-center Californians moving into the state in order to escape the Golden State’s increasing taxes and regulations. In 2013, Seattle voters elected a Socialist to the city council, Kshama Sawant, who is credited with getting a $15 minimum wage passed citywide. With 60 percent of the state’s population, the greater Seattle area now outvotes the rural, conservative areas in the rest of the state.

Bill Gates, Michael Bloomberg and other billionaires bankrolled I-594 this fall, a gun control initiative so extreme that even some prosecutors and law enforcement officers are saying they will not enforce it. The measure will cause firearm companies to flee the state, just as they left the Northeast for red states like Texas and Tennessee. Euthanasia and marijuana are both legal.

Several of my conservative friends who remain in Washington say they have to stay under the radar about their political views publicly, or risk retaliation at work. The most popular group in the Seattle area is tellingly entitled “The Puget Sound Conservative Underground.” I’ve had several friends admit to me the only reason they haven’t left the state is because they have children living with an ex-spouse in the state or a similar reason requiring them to stay.

Some of the left’s new taxes and regulations in Washington have backfired on them. The state dissolved its state-run monopoly on hard liquor, but the transfer was done so poorly it actually increased the cost of hard liquor to the highest in the nation - by far. Washingtonians now pay $35.22 per gallon of spirits. In Oregon, the state with the second-highest taxes on spirits, the cost per gallon is $22.73.

A friend of mine observed that many people remain in blue states like Washington because they are convinced it has superior culture and arts. They fail to see that much of the culture and arts Seattle was known for is now permeated with sex, profanity, left-wing political messages and shock value. Cultural snobs are basking in memories that are long gone.

The leftists in blue states are more concerned with what feels good than what is important economically. Their brand of arts and culture pushes the belief that we can all be the next artist or rock star, not the next manager of a business. It takes work to make something of your life, whereas the art world sells a life of fun. There is only room at the top for a few, yet the left-wing cultural elitists sell the belief that everyone will be the next idol.

Notably, vague articles like this point to nothing specific anymore when praising Seattle. Washingtonians have developed an almost cult-like obsession with the Seahawks, one of the last remaining relics of the state’s greatness. It is strange to see how many people display Seahawks flags from their car windows and wear Seahawks clothing now - as if nothing matters anymore to them but the Seahawks; they’ve tuned out everything else happening around them.

Meanwhile, red states like Texas and Arizona are growing and prospering now more than ever. I moved back to Phoenix this fall. I was thrilled to come back to wide, clean streets with little traffic, low gas prices and new, well-kept buildings. Most residents of Washington have never had the chance to visit a red state like Texas or Arizona for a few days, so they have no idea what they are missing.

Once Democrats ruin blue states, they flee to other states and enact the same failed policies there. How many states do they have to ruin this way before they realize it is their own shortsighted, utopian, disastrous tax and spend policies? The next question is, what state are Washington Democrats going to take over next?