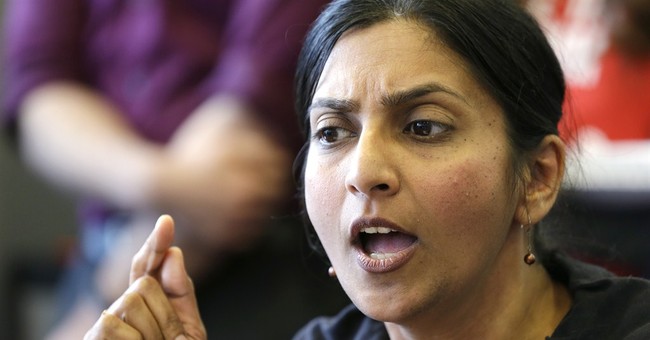 The city of Seattle is about to phase in a drastic increase in the minimum wage to $15/hr, thanks to the efforts of its new socialist city councilwoman, Kshama Sawant. Seattle’s far left mayor Ed Murray has now taken up the effort, and it is expected to be passed into law by the city council soon. The increase will affect nearly 100,000 workers, including almost all fast-food workers. Around 30 percent of all jobs in Seattle currently pay less than $15/hr.

What is going on is pay-to-pay politics, led by the unions. The losing mayoral candidate, incumbent Mike McGinn, unsuccessfully tried to save his campaign with a union quid pro quo. He received a $100,000 contribution from the United Food and Commercial Workers Union 21 last year, coincidentally timed about the same time he came out publicly opposing a new Whole Foods development in West Seattle.

Whole Foods does virtually everything the left wants - except they’re non-union. Whole Foods already pays its non-management employees an average of $15/hr, provides excellent benefits and health care, including same-sex benefits, and executive pay is capped. The company routinely makes Fortune’s list of “Best Companies to Work For.” Whole Foods is now the largest natural foods chain in the nation, not exactly a far right type of organization. Even though Whole Foods would be perfect for bohemian West Seattle, the unions take the approach, “Either you’re union, or we will go after you and destroy you.” They have a stranglehold on the local politicians in Seattle.

It is even more peculiar that McGinn and the unions did not target other companies, like Starbucks and Amazon which don’t have unions either. Amazon recently started a massive expansion project in Seattle, three towers going up near South Lake Union costing hundreds of millions of dollars. The most likely reason for the differential treatment is Amazon’s deep pockets, and the fact that the CEO of Whole Foods is a libertarian who opposes Obamacare, unions and doesn’t believe in manmade global warming.

When this law goes into effect, many businesses will lay off employees, find ways to automate jobs or force employees to work harder. Fast-food digital kiosks are already prevalent in Europe, where they were implemented in order to replace employees due to increasingly oppressive taxes and regulations. The kiosks are beginning to show up in the U.S., and can be expected to drastically increase in Seattle.

Similarly, in the past when there have been minimum wage hikes, grocery stores adapted by laying off cashiers and setting up self-service checkout lanes. Another adverse effect will be less difference in pay between employees, regardless of their skills or experience. The left admits that restaurants will be hit the hardest. Highly dependent upon unskilled workers, they will end up passing much of the increase onto consumers.

Even the liberal magazine Slate has acknowledged the drastic hike will have negative ramifications. “Any plan that makes hiring a worker more expensive than in France should be cause for concern,” wrote contributor Jordan Weissman.

As we’ve seen in the past when the government makes things too expensive for business, companies will relocate to the suburbs or flee the state. Services Group of America moved from Seattle to Scottsdale, Ariz., in 2006 due to high taxes. Services Group of America is ranked by Forbes Magazine as one of the largest privately-held corporations in the nation, with approximately $3 billion in annual revenues. After its CEO unexpectedly died in a helicopter accident in 2010, it was widely thought that the company would not have survived had it still been located in Seattle.

Boeing moved its headquarters out of the state in 2001 to Chicago. Microsoft’s headquarters are located across the water in Redmond, but there have been rumors lately that it may be leaving the state due to the mediocre business climate. Seattle is home to four Fortune 500 companies; Amazon, Starbucks, Nordstrom and freight forwarder Expeditors International of Washington. Which one will leave next?

Washington state already has the highest minimum wage in the nation, at $9.32/hr. This increase would make the minimum wage substantially higher than in socialist countries. Even socialist Switzerland just rejected an increase equivalent to $17.60/hr.

Proponents claim there weren’t adverse results after nearby Seattle airport city of SeaTac raised the minimum wage for some to $15 this year, affecting service employees of larger hotels and transportation employees. However, that raise only affected 1,700 employees and has barely been in effect since the beginning of the year. A judge temporarily blocked implementation at the airport.

As a result of the SeaTac hike, the Clarion Hotel closed its full-service restaurant there, laying off 15 people. General manager Perry Wall said the increase is going to hurt unskilled workers - the poor - the most. He told the Seattle Times, “I just think unskilled workers are going to have a harder time finding jobs. You’re going to have people from as far away as Bellevue or Tacoma wanting these jobs, and they’re going to come with skills and experience. For $15 an hour, they’ll go that extra distance.”

Ultimately, increasing the minimum wage to $15/hr will force the lowest skilled workers onto government assistance. Once people are dependent upon government, they will continue voting for the wasteful policies they benefit from, as is taking place in cities like Chicago, Detroit and Stockton.

Seattle has the eighth worst traffic congestion among large U.S. cities, even though it is only the 22nd largest city, and the price of housing is considered substantially high in contrast with the median income in the area. Seattle is considered one of the

Can anyone name one major city in America under decades of Democrat control that is not in financial ruin? Unions are destroying the country. They have the politicians in their pockets. If the politicians don’t support the unions, the unions withhold their reelection money. In Seattle, if a business shows up for a hearing in front of the city council, the majority of the nine members require appeasement of the unions. The only way the politicians won’t require that is if the business can show they have more support than the unions do. Unfortunately, most people don’t vote, but the unions get the vote out.

The members of the city council are paid $120,000 annually. It is telling that they don’t reduce their own salaries to $30,000, the equivalent of $15/hr, to show they really care about reducing income inequality.