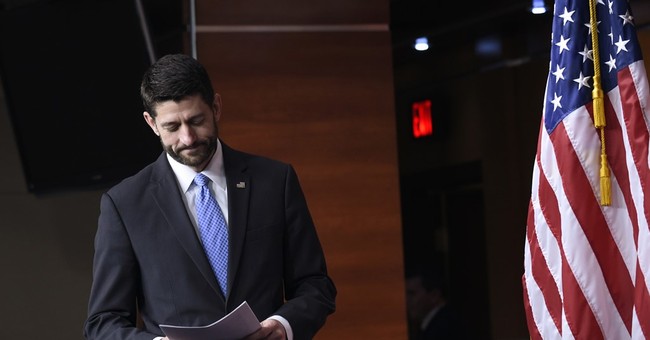 Trending
When Paul Ryan ran for speaker of the House of Representatives, he said Republicans "need to move from being an opposition party to being a proposition party." After a record-breaking eight years as the top republican on the House Budget Committee followed by a stint on Ways & Means, Ryan seemed well prepared to lead a newly energized house Republican majority toward reclaiming the power of the purse, which the framers of our Constitution vested in them.

Well, the results are in, and they're not good. Ryan has proved no better than his hapless predecessor, John Boehner, in cutting wasteful spending, reforming the tax system, defunding liberal interest groups, or instituting good conservative policies.

The 2,009-page, $1.1 trillion Consolidated Omnibus spending bill, which the Republican Congress approved and President Obama signed a week before Christmas, violates every promise that Republicans made to the voters who rewarded them with landslide victories in the 2010 and 2014 midterm elections. It's no wonder that betrayed Republican voters have adopted a throw-the-bums-out attitude that supports the presidential campaigns of Donald Trump, Ted Cruz, and Ben Carson.

Democrats lost no time gloating over what Chuck Schumer hailed as a "great victory for the principles Democrats stand for." As Senator Patty Murray explained, "We rolled back the automatic budget cuts ... and we kept out poison pill riders even after the Republicans spent months talking about defunding Planned Parenthood."

Besides Planned Parenthood, which was caught selling body parts from aborted fetuses, the Omnibus continues high levels of spending for such liberal priorities as the Legal Services Corporation, which sues states on behalf of illegal aliens, and Head Start, which the government's own studies prove has no lasting value. It increases the annual budget for the Internal Revenue Service, despite that agency's documented record of abusive misconduct toward tea party conservatives.

The new budget not only fails to stop Obama's executive amnesty, known as DACA and DAPA, which two federal courts have said is illegal, but it quadruples the controversial H-2B program, which imports low-skilled foreign workers for blue-collar jobs that millions of Americans can do. That provision violates Paul Ryan's recent pledge not to push for higher immigration levels, at least until the next president takes office.

"There is a reason that GOP voters are in open rebellion," Senator Jeff Sessions, R., Ala., said when he learned of the surreptitious increase in the number of low-wage guest workers. "They have come to believe that their party's elites are ... openly hostile to them."

Despite the recent massacres in Paris and San Bernardino, both of which were committed by Muslims loyal to ISIS who crossed national borders with impunity, the Omnibus continues full funding for the resettlement of Syrian refugees without additional screening. Despite the deaths of Kate Steinle and other Americans murdered by Mexicans who had previously been deported, there is still no limit on federal subsidies for sanctuary cities.

The recently concluded UN conference on climate change, where Obama committed the United States to reducing our energy use before China does, offered a great opportunity for congressional action. The Omnibus failed to block the EPA's Clean Power Plan and Waters of the United States rule, but it provided plenty of money, which Obama can reallocate to the UN's Green Climate Fund.

Ryan's surrender was so complete that it's no wonder Obama said "kudos to him" before boarding Air Force One for the First Family's annual vacation in Hawaii. As Democratic Congressional Campaign Committee chair Steve Israel explained, "We ended up with a bill today that has all the good stuff in and most of the bad stuff out. That's the definition of victory."

The Democratic budget victory came despite Republicans winning the largest number of seats they've had in Congress since the 1920s, reinforced by winning a thousand seats in state legislatures across the country. The Republican leaders' failure to make use of their majority, to make good on their promises, supports Rush Limbaugh's theory that Republican leaders "are willing to throw away their current base for the new one they hope to get."

Although the current congressional leadership seems to have lost its will to fight for conservative policies, the 95 Representatives and 16 Senators who voted against the deal provide hope for building a more effective conservative majority next year. Our marvelous Constitution provides many ways for concerned citizens reduce the size of our government.

Meanwhile, some excellent candidates are lining up to challenge the Republican incumbents who forgot why the voters sent them to Congress. Find one of those candidates in your area and give him or her your full support.