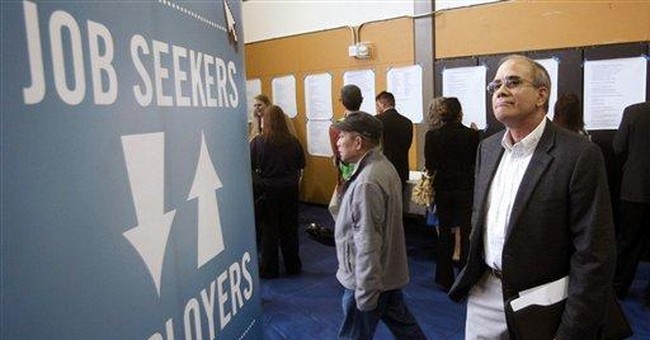 Friday, the Labor Department is expected to report the economy added 206,000 jobs in March. A significant improvement over January and February when harsh weather depressed hiring, this is still well below the pace needed to lower unemployment to an acceptable level.

The jobless rate is expected to fall a notch to 6.6 percent—well below the 10 percent recession peak—but most progress has been accomplished by a falling adult labor force participation rate. Were the same percentage of adults employed or looking for a job today as when the recession began, the unemployment rate would be 9.6 percent but 350,000 jobs would be required each month for three years to take unemployment to 6 percent.

Baby boomer retirements are not driving down adult participation—seniors ages 65 to 69 working has risen from 27 to 31 percent over the last decade. Neither is young adults staying in school longer the primary force sidelining adults.

Rather, decent employment opportunities for prime working age adults have not kept pace with population growth. The percentage of Americans ages 25 to 54 that has a job is down to 76.5 percent from 81.8 percent at the beginning of this century, despite more women in the workplace.

Shrinking opportunities, especially in manufacturing and the building trades, have hit men particularly hard. One out of six between the ages of 25 and 54 is without a job, and many have little prospect of finding one.

Twenty million Americans over 25 are working part-time, owing much to poor economic conditions and government incentives not to work full time. ObamaCare and the Earned Income Tax Credit (EITC) encourage low wage employees to work part-time to avoid losing benefits, and employers are limiting workers to less than 30 hours per week to avoid health insurance mandates.

All this pins down wages—especially for high school graduates with little additional training and college graduates from non-elite institutions—and worsens income inequality. At the root is slow economic growth that has deviled Presidents Bush and Obama.

During the Reagan-Clinton era, GDP growth averaged 3.4 percent; however, since 2000 the pace has slowed to 1.9 percent, thanks to well meaning but ill conceived government policies.

Trade agreements have further exposed U.S. manufacturers to foreign competition, but have not similarly improved their market access abroad. Principal competitors China, Japan and Germany all systematically undervalue their currencies to make their exports artificially cheaper than U.S. products both in domestic and rapidly growing Asian markets.

Similarly, unlike Canada, which shares many of the same demographics shaping U.S. labor markets, the United States has chosen to outsource—not reduce—environmental risks associated with petroleum development by shutting down or curtailing production on the Atlantic and Pacific Coasts, the Gulf and Alaska.

Those policies are responsible for a $475 billion trade deficit, which easily suppress growth from 3.4 to 1.9 percent. Just the lost R&D, so prevalent in manufacturing and energy but now captured by foreign competitors, could boost U.S. economic growth by 2 percentage points a year.

Also, dysfunctions in banking, higher education and health care imposed by misguided regulations and government subsidies permit professionals to earn inflated incomes but harm the availability of credit, workers with the skills employers need and affordable health care and insurance. Along with the inefficiencies imposed by the excessively complex corporate and personal income tax systems, those lower productivity, investment and growth dramatically.

Emerging from a long recession, the economy should grow at 4 or 5 percent and create the needed jobs, but misguided and abusive government policies do not permit the economy to accomplish takeoff speed and raise wages.

Peter Morici is an economist and professor at the Smith School of Business, University of Maryland, and a widely published columnist. He tweets @pmorici1