The Oddest Yoga Position of All 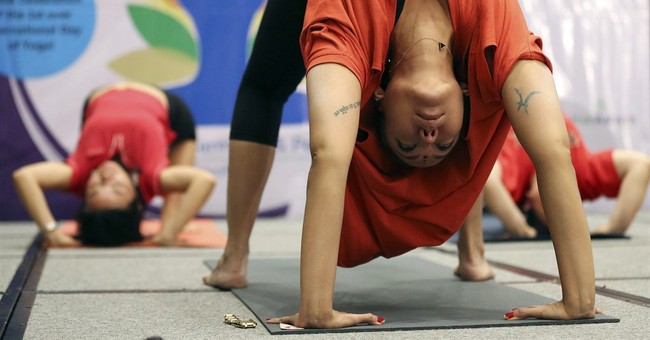 “There was truth and there was untruth, and if you clung to the truth even against the whole world, you were not mad,” Winston Smith clandestinely wrote in his diary. Smith, the protagonist in George Orwell’s classic dystopian novel, 1984, fought against a totalitarian state, against Big Brother.

In our own maddening, modern, non-fiction world, you are not insane if you cling to truth.

Even if you practice yoga.

What? Yes, yoga. The stretching exercise/meditation practice that is said to help bring spiritual peace to its practitioners is under assault, at least in Canada.

Yoga began in the Indus-Sarasvati civilization in Northern India over five millennia ago. We find its first mention in the oldest sacred texts, the Rig Veda. It has been one of India’s most popular cultural exports. In Ottawa, Ontario, one Jennifer Scharf has been offering free weekly yoga instruction to students since 2008. She’s one of many thousands of westerners to teach and propagate the discipline.

But in September Scharf’s program was slated for suspension. Her college caved to student leaders who charged that the free on-campus yoga class could be seen as a form of “cultural appropriation.”

Well, the student leaders aren’t wrong. It is cultural appropriation. And some folks might indeed see this as a horrible form of racism.

The short response — the one any rational person would marshal — is simple enough:

The long response? Well, I am not going to make it. There are some things I won’t do. I’m not going to expend eight hundred words — and certainly not several thousand — explaining why the new anti-racism and cultural obsessions with “marginalization” and “micro-aggression” and all the rest are wrong-headed. By their fruits we know them. These activists demand to be coddled, intellectually and emotionally; they demand censorship; in the name of respect for all, they respect only those who kowtow to them. (Just look at the way student activists shout down their administrators — even administrators who have done everything they can to cater to their cause.)

This problem is not a Canadian problem of course. Recent stories from Berkeley and Mizzou and all over the Ivy League have shown just how idiotic the situation has become.

I doubt this starts in homes. Perhaps it started with the New Left taking over colleges as the Baby Boom went through the Academy like a pig through a python. But these kids come to college from high schools, where these ideas have been inculcated. And over at Common Sense, my daily blast online, I’ve been regaling my readers with the idiocies of public school administrators for years.

So let’s solve this problem. Public education in America is obviously a disaster — now politically, ideologically, and in the realm of manners. The federal government should immediately defund it. And stop regulating it. And sending out mandates. (Much of this nonsense does indeed come from Congress and the President — most certainly including President Obama.) And then, state by state, let competition come up. The hidebound parasites that have hijacked public education must be stopped.

Before their “best students” ruin civilization and overthrow freedom and responsibility for generations to come.

Today, yoga took the hit. What will be next? The Constitution, for its appropriation of political practices of the Iroquois Confederacy? Christianity, for its Mid-East origins? Orwell’s Animal Farm, for its making fun of pigs?