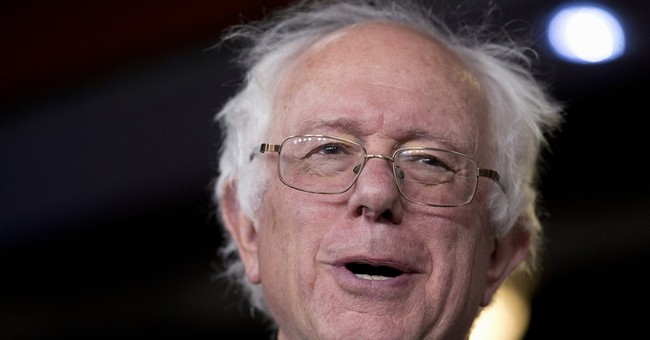 One of the Vermonter’s most visceral claims to left-wing fame is his maintenance of a more ferocious hatred of the billionaire Koch brothers, David and his elder brother Charles, than any other progressive on the planet.

Sanders is kompletely, krazily Koch-phobic. Back in 2013, when the scandal broke of veterans dying due to a lack of care from the VA, the Green Mountain State senator peddled the notion that the problem comes down to this: “you have folks out there now — Koch brothers and others — who want to radically change the nature of society, and either make major cuts in all of these institutions, or maybe do away with them entirely.”

Weird, too, to completely ignore that Koch causes are often more libertarian than conservative, including support for gay marriage and opposition to war in the mid-East. And yet it’s the Kochs who get called out by Sen. Sanders, whose presidential campaign seeks to mobilize “millions of people to say ‘enough is enough — Koch brothers and millionaires can’t have it all.’”

Yet, with all his foaming about millionaires and billionaires, it is simply the political perspective from which the Kochs speak, and spend, that so unnerves the senator. He certainly doesn’t object to all super-rich donors.

Sanders didn’t say, “Soros and millionaires cannot have it all.” Leftist billionaire George Soros gives millions to organizations working to turn the U. S. into a European-style “social democracy.”

Sanders didn’t say, “Bloomberg and millionaires cannot have it all.” Super-rich statist Michael Bloomberg has spent fortunes to undermine the Second Amendment and make America more of a Nanny State.

Sanders didn’t say, “Steyer and millionaires cannot have it all.” California billionaire Tom Steyer sure spent a lot of money to raise taxes and elect Democrats.

Bernie Sanders is blinkered: others are greedy; his side is pure.

Enough is enough — what’s important to Sanders is that his opponents be silenced by government order. There’s nothing democratic about that.

Thank goodness, Bernie is not likely to be the next president.

Instead, Hillary Clinton will be coronated as the Democrat’s nominee, and perhaps become to the nation’s first woman president.

And sit atop the federal leviathan. Appoint a U.S. Supreme Court justice or two for life. But I digress . . .

It’s Plank No. 4, I believe. I went looking on her campaign website for all the planks and their precise wording, but it was a no-go. Even after fool-heartedly giving up an email address and my zip code to get past the home page, the site required a financial contribution to proceed any further.

On the bright side, the Hillary for President website doesn’t hassle you about listing which foreign government you’re associated with.

“We have to get rid of the unaccountable money that is flooding into our political system,” she said in one of her highly scripted-to-appear unscripted campaign events.

Unaccountable? Like the contributions she pledged the Clinton Foundation would account for — by disclosing them — and failed to disclose. Or the hundreds of millions donated by big, bad multinational corporations and unsavory foreign governments that may have accrued positive benefits to Mrs. Clinton, personally, while simultaneously bestowing positive benefits back onto those very same corporations, courtesy of the mechanism of then-Secretary of State Clinton securing certain (apparently requested) policy changes.

Or maybe not. There’s no smoking gun. No grainy recording of a 3:00 am phone call and her mumbling: “Hey, I’ll do this if you give me hundreds of millions of dollars.”

It’s just that hundreds of millions of dollars have been given and those type things done — some involving an apparent change in her policy position.

From cattle futures to selling nights in the Lincoln bedroom and seats on trade trips to China to her deleted emails, Madam Clinton is always in the mix. But now, as she begins her second run for The White House, she promises to fix the influence of money in our politics, “even if it takes a constitutional amendment.”

So, what does she who has admittedly planned to raise and spend $2.5 billion — with a “b” — intend to do to get “dark” or “unaccountable” or really just “everybody else’s” money out of politics? What sort of amendment to our Constitution?

Well, the constitutional amendment on campaign finance “reform,” authored by Tom Udall (D-NM) and voted for by every Democrat in the U.S. Senate, would “fix” the money problem by giving Congress — the most hated assemblage of thieves and scoundrels on the planet — complete and total control of regulating their own and, more importantly, their challengers’ campaign financing.

Wherever one stands on the issue of how campaigns should be financed, surely no one in their right mind — and only a majority of one chamber of the Congress — thinks bestowing that awesome power on Congress makes sense.

Let’s take a moment to imagine the regulatory nightmares Congress could construct for the Federal Election Commission and President Hillary Clinton’s Department of Justice to enforce. Perhaps Lois Lerner might be lured out of her lavish publicly funded retirement from the IRS to help stir the cauldron.

It’s possible we’ve caught a peak of that future dystopia in the IRS targeting of conservative groups, and moreover, in the bizarre and frightening police raids against conservatives in Wisconsin, which are now coming to light.

The Badger State sports some of the nation’s worst laws regulating political speech — or “campaign finance” — as well as a politics partisan enough to produce politicians ready to use their “enforcement” power as a political sword and strategy.

One such politician is Milwaukee County District Attorney John Chisholm.

The Milwaukee County prosecutor and others “correctly identified some of the most important communicators of political messages in Wisconsin,” Eric O’Keefe, the leader of the Wisconsin Club for Growth, told Fox News’ Meghan Kelly, “and they raided their family homes, with kids at home.

“They came in the dark.

The Wisconsin Club for Growth was just one of 29 conservative groups hit with so-called John Doe investigations. In some cases, armed agents with battering rams raided homes at dawn, snatching computers and phones and telling those targeted that they could not legally speak to anyone about the probe.

An across-the-board gag order was slapped on Wisconsin’s most active conservative organizations.

O’Keefe was hit with a gag order, too, but bravely violated it to speak out to media back in 2013, which I reported in this space. His leadership encouraged others to tell their stories about the raids, which were featured in a recent National Review article and on Rush Limbaugh.

O’Keefe also fought back in federal court, suing Chisholm. Tomorrow, we may discover whether the U.S. Supreme Court will hear an appeal in his case, O’Keefe v. Chisholm, determining whether a federal district court judge’s injunction against Chisholm’s wicked witch-hunt will stand.

We all know what this is really about. Chisholm was retaliating against individuals and groups that supported Governor Scott Walker’s ultimately successful moves to curb Wisconsin’s powerful public employee unions.

It’s a grand example of our age’s real class warfare: between insiders with power and outsiders trying to curb that power. Bernie and Hillary are both on the wrong side.