Paul Greenberg  |  Feb 10, 2017
The opinions expressed by columnists are their own and do not necessarily represent the views of Townhall.com.
Top Columns
Trending on Townhall Media 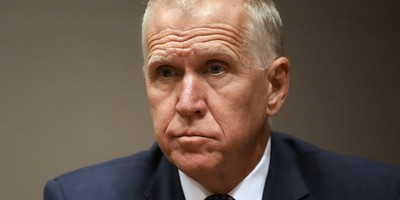 The GOP Is Not Listening to the Base Kurt Schlichter

If it can happen even in the best of families, it can certainly happen with the best of politicians, and this time did. Of all Arkansas' congressional offices, Sen. Tom Cotton's was the only one that drew the blinds and retreated into silence when a bunch of protesters that calls itself Ozark Indivisible came a-callin' and complainin'.

Here was Caitlynn Moses, one of Ozark Indivisible's leaders, letting Sen. Cotton have it: "We have gone to Sen. Boozman's office and we have gone to Congressman Womack's office, and we've had no issues talking with his staff. But Sen. Cotton, all of his offices are locked." Which wasn't a smart move on the senator's part. Indeed, it was a surprisingly dumb one on the part of a United States senator, statesman and soldier ordinarily sensitive to public opinion. Was the junior senator and shining star of his state's congressional delegation getting a bit too big for his combat boots? His staff might as well have tacked up signs saying Keep Out.

Left to cool their heels while they waited for an audience at the office of Sen., Capt. and presidential possibility Cotton, the protesters only upped the ante, and they already had a lot of complaints to air. They'd started out to demonstrate in favor of the notorious Patient Protection and (un)Affordable Care Act, but after being stood up by Sen. Cotton and staff, they lowered their guns and fired directly on everything Trumpian in sight. And targets of opportunity loomed all around as this new administration took the reins in Washington -- and proceeded to loosen them. It's still moving to reduce regulations on business, show respect for religious freedom under the First Amendment and has even nominated a Supreme Court justice who sounds like a winner. In short, Donald Trump and company are acting like Republicans.

But, strangely enough, Tom Cotton was being standoffish at the time. The great advantage of this small, wonderful state is that it feels like one big family, right down to family feuds. If no one you know has a father, son, sister or brother in this family affair, then some cousin probably went to law school with an uncle. But instead of putting out the welcome mat, Sen. Cotton's staff put up signs announcing: "Entrance by appointment only" and "Absolutely no photography or recording without prior permission." Jawohl!

Sarah Scanlon, a kind of professional protester who ran Bernie Sanders' presidential campaign in Arkansas last year, was on hand to take full advantage of Sen. Cotton's lapse: "We're the people that put him into office. He's representing Arkansas. How does he represent us if he doesn't give us an opportunity to express our opinions?" Good question. You'd think Capt./Sen. Cotton would have learned enough from all his time in the Army to just say, "No excuse, ma'am." Or if he had to add anything to that confession, he might have tacked on: "It won't happen again." And then see to it that it didn't.

There was a time not very long ago when it was Republicans who stood in line outside our public servants' doors objecting to Democratic policies, yet they weren't cold-shouldered. On the contrary, they were welcomed. Mark Pryor, who used to be a U.S. senator and is still a gentleman, recalls that he had an open-door policy when he represented Arkansas in the nation's capital. "My view," he explains, "was that Arkansans were always welcome in my office. It was really their office after all." And we the people just might take it back. It's been known to happen, as it did to Mark Pryor.

The congressman from the First District -- Rick Crawford -- knows how to do, as his statement about this brouhaha shows: "All AR-1 constituents are welcome and are in fact encouraged to visit either my D.C. office or one of my district offices in Jonesboro, Cabot or Mountain Home. While an appointment is not necessary, we will be better prepared if they call the office in advance. I think it's important to maintain an open-door policy so that folks know that they have that direct link to their representative in the U.S. Congress." Much the same opinion was voiced by congressmen from the state's other districts or by their spokespersons. Maybe they all should have all gathered 'round Tom Cotton back then and given him some brotherly advice, or just a stern talking-to. Because he very much needed one at the time.

But by now the senator has apologized, even the protesters are making nice, and civil discourse is being restored. Peace, it's wonderful. And welcome.