Paul Greenberg
|
Posted: Jul 21, 2016 12:01 AM
Share   Tweet
The opinions expressed by columnists are their own and do not necessarily represent the views of Townhall.com. 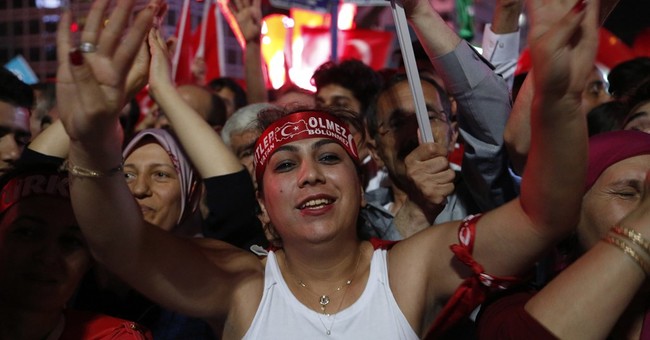 The first news bulletins raised the wildest hopes: In a once familiar pattern, Turkey's military would again step forward to make that country part of the West, complete with free elections and the rule of law. Back when the Ottomans ruled, Turkey was known as the Sick Man of Europe, but now it would become a healthy democracy again. Its reigning sultan these days, Recep Tayyip Erdogan, had long been saying that a military coup was in the offing, which was his excuse for continuing to tighten his grip on power.

The first announcement from those officers heading the coup seemed to promise as much. They said they'd seized control of the country "to reinstall the constitutional order, democracy, human rights and freedoms, to ensure that the rule of law once again reigns in the country, for law and order to be reinstated."

Those officers were acting in the tradition of the military leader who had overthrown a corrupt regime and created modern Turkey. His name: Mustafa Kemal Ataturk, and his portrait is still displayed everywhere in Turkey but, alas, mainly for ceremonial purposes.

Support for the military as a guardian of the country's stability and modernity remains strong in Turkey, despite the demagoguery of its current dictator. To quote a cab driver in Ankara when it looked as though the coup might succeed: "The people tried to stand up against President Erdogan, but they couldn't, they were crushed, so the military had no choice but to take over." Or as a teacher said in Istanbul: "The country is in chaos, and Erdogan needs to be put in his place, but I'm afraid. I'm very afraid because in the past a lot of innocent blood was shed in these coups. I'm anxious. I don't know what to say at this point. We are all in shock. No one thought that the military would stand up against Erdogan." But it did, or at least some of it did before being crushed. And hope delayed soon became hope denied.

At least since the French Revolution set the pattern, the urban middle class -- the bourgeoisie -- has been the seedbed of the greatest changes. And as long as Turkey has such a class, the country will remain restive under any dictator. This time, many Turks may have been disappointed, but surely there will come a next time when they won't be.

For a moment, the sun had broken through the clouds. And the old Turkey of hope seemed to be returning. Would the veil be lifted, and Ataturk's vision be restored? It was not to be. At day's end, hope had soured. The coup had been crushed and Ataturk was still dead.