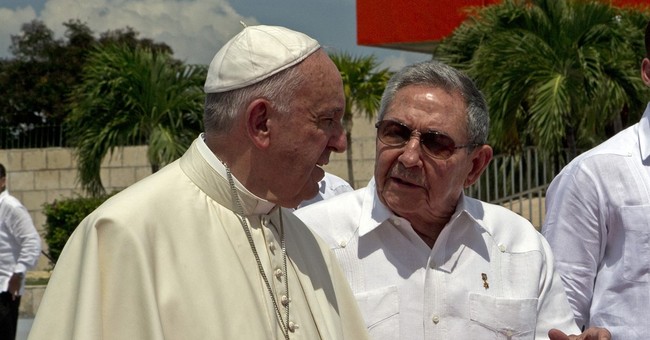 Cuba has got to be one of the most revolutionary places on the planet -- if you're naïve enough to believe the official slogans, street signs and the rest of the prolefeed on display in the Castros' crumbling little police state.


The old Soviet Union used to be heavy on talk of revolution, too, though most Russians came to realize it was only talk. In the grim, gray reality, Russia was anything but revolutionary. When that evil empire collapsed, so did the empty slogans about revolution, the workers' state and all the rest.


Official lies may hold up for a while, but they don't have much staying power. Somebody is bound to notice that they're being forced on the people at the point of a gun. That's not revolution, it's tyranny.


But this week the Cuban people got to hear a really revolutionary message -- one that has changed the world since Roman emperors tried to suppress it and failed. No wonder it has alarmed tyrants from Nero to Stalin.


Cuba has been one of communism's last outposts. Over the past half-century, it's managed to turn that once beautiful and prosperous isle in the Caribbean, however corrupt its rulers, into an ordinary police state. Complete with all the appurtenances thereof, including a routine brutality and its own undiscouraged band of dissenters, who've never realized that resistance is futile no matter how many times they're told so.


Prophets like Solzhenitsyn and Pasternak are not easily discouraged any more than the Orlando Zapatas and Yoani Sanchezes are. The names and nationalities may change, but the spirit of freedom these heroes embody is the same. One suspects that in the end the brothers Castro will no more be able to wipe out freedom and faith in their domain than other dictators have been.


The true revolutionaries are those who believe that the truth surpasses all politics -- indeed, all understanding. And that the truth will set them free. Iron bars never did a prison make. For the spirit of man can never be imprisoned even if his body is.


"For I am persuaded," as a persecutor turned saint put it, "that neither death, nor life, nor angels, nor principalities, nor powers, nor things present, nor things to come, nor height, nor depth, nor any other creature, shall be able to separate us from the love of God, which is in Christ Jesus our Lord."


What can you do with people like that -- except say Amen and try to emulate them as best we can?


This week you could feel the hopeful tremors as a pope landed in Cuba, and its people celebrated the Holy Father's presence among them. Hope, fragile as it is, was reborn, and took flight again on the snow-white wings of faith. That rustle in the air you hear is the death rattle of every form of tyranny, for tyrants cannot stand against the all-embracing power of love -- and truth. For the truth sets us free.


The warm reception accorded the pope in Cuba this week was one more sign that communism's days on that island are numbered, as surely as they are elsewhere. Communism is already joining the world's long list of fallen faiths. If it started as a revolutionary movement, it no longer is. It became just another racket long ago.


What was it that the pope said that so encouraged the crowds that turned out to cheer him -- and celebrate the Mass with him? It certainly wasn't anything he might have said about climate change or capitalism vs. communism or any other issue of the moment, the kind that come and go with the moment. There will always be those eager to interpret papal views, to criticize or defend them and him. And comment on his visit with an air of authority that will fade when those issues do.


It was left to the pope to deliver the most revolutionary of messages -- as new and yet as old and always as fresh as the Gospel itself. He didn't deal in political dialectics; he just told stories. The same inexhaustible stories -- they're called parables -- that his Teacher from Nazareth did. They haven't changed in centuries, yet they become new every time they're told. How do you explain that? You don't. You just listen. And marvel. And are reborn.


Francis celebrated Mass in the officially named Plaza of the Revolution in a town called Holguin, but it was the Mass that was revolutionary -- and the parable he repeated. It was about a tax collector named Matthew, and tax collectors are never popular. Of all the people the Savior should choose as a friend, Matthew was surely among the least likely -- to the ordinary cast of mind, anyway. But there is nothing ordinary about this truly revolutionary doctrine known as Christianity the pope was carrying to Cuba. "Do you believe that a tax collector can become a servant?" he asked the crowd. "Do you believe it is possible that a traitor can become a friend?" If you can, you can believe Francis was preaching revolution -- a revolution called Christianity, which continues to astound.


To read the news coverage of the pope's visit to this hemisphere is to be impressed once again by how little my brethren in the press understand the role of a religious leader in this world -- and beyond. They analyze the pope's statements as if he were just another politician with a constituency to please and transient issues to weigh: Is he going to come out for capitalism or socialism this week? Where does he stand on the environment? What does he think about immigration -- legal and illegal?


All of these may be issues of our time but a pope, or at least a great one, concerns himself with things beyond time.


Yet so much of the news coverage about Francis' visit to the New World fails to appreciate the devotion of Roman Catholics to their church no matter what their political views. To quote Dana Giola, past chairman of this country's National Endowment for the Arts:


There are some things that supersede politics, as hard as it is for some of our sophisticates to understand as much. But this pope does. Like his faith, he rises above the things of the moment and considers first things, permanent things. Now that's a revolutionary idea.


The staying power of Christianity while false faiths have fallen all around it -- fascism and communism are among the latest -- should tell us something about the enduring power of faith as one ideology after another once hailed as the wave of the future proves only a specter, a vanishment, like yesterday when it is gone, a nightmare that is past and cannot stand in the light of this astounding, forever new day. Amen.