Why Lindsey Graham Doesn't Have A Chance 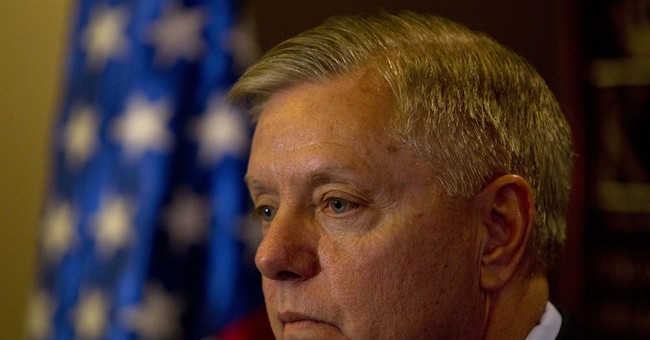 With the exception of Wisconsin's fighting governor, Scott Walker, my favorite underdog in the already overcrowded race for next year's Republican presidential nomination has got to be Lindsey Graham, who's now declared his candidacy.

Sen. Graham chose his home town in South Carolina -- indeed, his home neighborhood -- to make his first appearance as a formal presidential candidate. The candor of the senator's announcement demonstrates why he's so unusual a candidate, why we've long admired him, and why he doesn't stand a chance of getting the nomination.

First, he'll be making foreign policy the centerpiece of his campaign -- as opposed to demagoguing hot-button domestic issues like immigration. Second, he doesn't underestimate the sacrifices it will entail to keep this country secure and restore its leadership in the world, which are much the same thing -- no matter what our neo-isolationists claim. Third and the reason he's not going to be his party's presidential nominee next year, is that he suffers from a fatal political defect in this era of the slick-and-sly. It can be summed up in a couple of words. He's too honest.

But all that scarcely makes his words less admirable. There was something Churchillian about Lindsey Graham's willingness to confront the cost of what he's proposing -- "the blood, toil, tears and sweat" it will take to face up to the test that now confronts American foreign policy.

It's a price other candidates who speak glibly of restoring American leadership in the world may try to gloss over. They'd prefer to minimize the challenge. But the senator from South Carolina recognizes that there's nothing minimal about the test ahead. And if this country is serious about facing it, that'll mean American boots on the ground.

Yes, even in Iraq, a place many of us never want to hear about again. But we will have no choice. Not so long as it's collapsing, Islamic State is on the march and American resolve is proving a sometime thing. Speaking from his background both in the military and on the Senate Foreign Relations Committee, this is one senator who minces no words: "Simply put, radical Islam is running wild. They have more safe havens, more money, more weapons and more capability to strike our homeland than any time since 9/11. They are large, they are rich and they're entrenched." Hard as it is for many of us to admit it.

As president and commander-in-chief, Lindsey Graham pledged, he'd lead the fight against these terrorists and "make them small, poor and on the run." He adds: "I'm afraid some Americans have grown tired of fighting them. I have bad news to share with you -- the radical Islamists are not tired of fighting you."

It was John Quincy Adams who famously declared that America does not go abroad in search of monsters to destroy. He did not say what this country should do when the monster comes seeking us. Lindsey Graham just did: Destroy it -- though the price of doing so is never light. As you'd think Americans would have learned by now, and even learned to face. As this senator just did.

None of this means that Lindsey Graham has no interest in domestic issues. But not in demagoguing them. On the contrary, he's compiled a record on those issues that is not just reasonable but realistic. He voted to end the government shutdown that the firebrands in his party once supported and that cost the GOP not just widespread support but any claim to be a political party to be taken seriously. It seems to have learned better since, or at least let's hope so.

Sen. Graham worked with his sidekick John McCain back in 2013 to draft a way for illegal immigrants to come out of the shadows and eventually become full citizens -- after meeting any number of tests like paying their fines, demonstrating their proficiency in English and generally meeting the standards of citizenship. That approach struck the usual xenophobes as unspeakably, unacceptably, inexcusably reasonable. And constructive. It still is a sound policy, and it's still just as unpopular with his party's base.

That's the cost of talking sense to the American people when we don't want to hear it. But no one can claim Lindsey Graham hasn't tried. For that he deserves the country's thanks. And respect.

If you think telling some home truths about foreign policy can be unpopular, consider what Lindsey Graham has to say about reforming Social Security and Medicare so they'll be preserved for future generations: "We have to fix entitlement programs to make sure people who need the benefits the most receive them. That's going to require determined presidential leadership."

Uh-oh. Even those of his supporters who agree with the senator and admire his candor have to wonder if he's not being too candid about those issues, which used to be described as the third rail of American politics. Because to touch them might mean the end of a presidential campaign.

To quote one of the senator's supporters, 35-year-old Daniel Nichols of his home town, "You know, I think he may be right on Social Security," said Mr. Nichols, but "I wonder if he's being a little too truthful when he says that, though."