Boy, That Brings it All Back 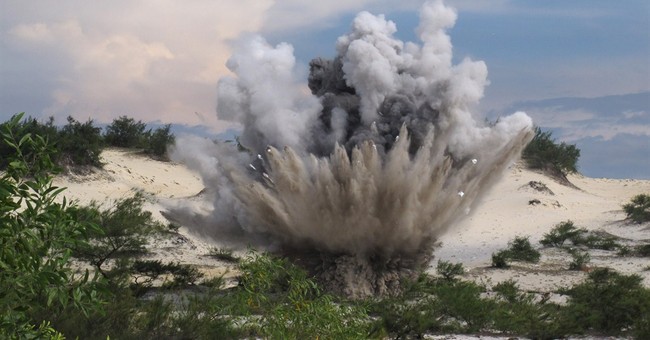 LITTLE ROCK -- The news story was big in these parts and should have been. It came with a full cast of characters, details a-plenty, illustrations galore and historical resonance. This saga about an unexploded Civil War artillery shell seems to have involved just about every official in a whole section of the state -- military and civil, from a local bomb squad to the staff of a national park.

But after a day or two of wrangling that must have seemed like weeks, the unexploded shell was exploded. As it should have been. By experts, not by some amateur drilling into it and killing himself. As has happened. This was one news story that ended happily. Also quickly, definitively and explosively. (Whew.) Give me a happy ending every time. And a safe one.

As soon as I read that the rusty old shell had been rolling around in the back of a truck for a few days, and then was being carted around on the console of some bureaucrat's pickup, my training as a safety officer at Fort Sill clicked in, like a proximity fuse set to go off automatically. With a bang. And my reaction was immediate: Get rid of the damned thing ASAP -- without further discussion, ado and general philosophizing about history vs. safety.

The story could have come straight out of the Army safety officer's manual -- specifically, the chapter about what to do with unexploded ordnance. And what not to do. First rule: Take No Chances.

My own Army story begins the day I got to Fort Sill as a young lieutenant. Packed into an Army bus, we had scarcely driven through the gates when the MPs pulled us over to the side of a narrow road inside the post to make room for a swarm of ambulances, medics, stretcher-bearers....

Later we figured out there had been a training accident, but then and there the scene outside the bus window was chaotic. Inexplicable. And bloody. It seems an unexploded 105mm round had gone off inside the barrel of a howitzer, spewing shrapnel in all directions.

From that moment on, I resolved to be the most rigid, rule-keeping, tight-assed safety officer on the base, and I probably was, to judge by the looks I kept getting out on the artillery range whenever I declined to go ahead and fire a questionable round out of the tube and be done with it. Supposedly.

It happened with some regularity, but I never yielded. A bloody scene like that will stay with even the greenest, most uneducable lieutenant, and I didn't care what the other officers -- of high rank or low -- thought of me. I had intuited early on that the only way I was going to get through my time in the service was to go strictly by the rule book, having no natural instinct for soldiering. And the bloody sight by the side of the road my first day on base only confirmed my inclination, which soon became an unswerving conviction. It was the only way I could get through a day on the range and sleep o' night. At least my gun crew would be safe, if delayed time and again by my stubbornness.

I had already learned from the Basic Officers Course that out on the range a safety officer's decision was final. Even if the base commander had come by and tried to overrule me, out there my word was law. I was a kind of one-man Supreme Court -- and I was taking no appeals.

No, my attitude did not make me popular, like I cared about being popular. Just as today I don't much care whether my political opinions are popular. Or consistent. Or if they fit some ideological pattern. I just care about whether they can be justified. As a wise publisher once told me, if you're sure you're right, forget caution. And the opinions of others.

Out on the firing range, there was always some hot-shot battery commander eager to fire the questionable round out of the tube and get back to the barracks. So I was not unprepared when a captain told to me to go ahead, Greenberg, have the cannoneer pull the lanyard one more time, and be done with it for goshsake. "Yes, sir," I told him. "Be glad to. If you'll just put that order in writing, that's just what I'll do."

He paused. And I could almost see him weighing his chances at a court-martial, even anticipating the testimony:

"And so, Captain, you decided to overrule the advice of the safety officer and fire the fatal round out of the tube, right? Indeed, you even signed a written order to that effect, a copy of which I hold here in my hand."

It took only a moment's reflection for the captain to realize that he agreed with me after all. Even if it meant securing the shell in question in the bed of a deuce-and-a-half and heading all the way to the armory to turn it in, along with a good hour's paperwork. Instead of heading straight to the barracks for a hot shower and cold beer. Thank you, Lieut. Greenberg, for holding up the whole battery. But I never regretted a single minute of the delay. We all lived to complain about it, didn't we?