Paul Driessen
|
Posted: Mar 03, 2020 1:15 PM
Share   Tweet
The opinions expressed by columnists are their own and do not necessarily represent the views of Townhall.com. 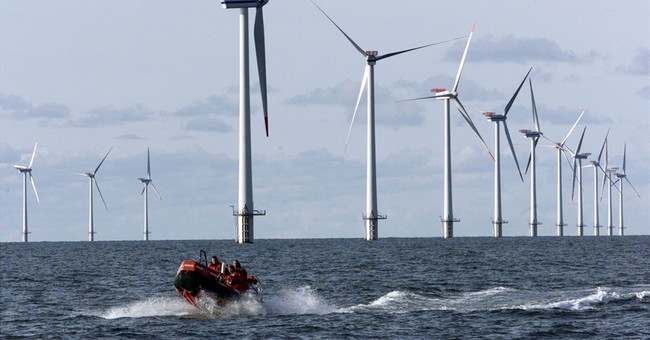 Senate Majority Leader Dick Saslaw has said Virginia has “a climate problem, and you can’t fix it for free.” However, the climate crisis is mostly exaggerated, imaginary or based on faulty computer models. Worse, the “fix” will be anything but free, and it won’t make an iota of difference to the global climate.

The USA has actually had  fewer violent (F3-5) tornadoes the past 35 years than during the previous 35, and not one in 2018. Hurricane frequency and intensity has barely changed since 1850 – except that the USA enjoyed a record 12-year absence of Category 3-5 hurricanes, 2005-2017. After rising some 400 feet since the last Ice Age, seas have been rising at just 7-12 inches per century for over 150 years, and a lot of apparent sea level rise is actually land subsidence, including around the Norfolk-Virginia Beach area.

Water, ice and water vapor have vastly greater influences on Earth’s temperatures, climate and weather than do carbon dioxide and all the other atmospheric gases combined, Greenpeace cofounder Patrick Moore notes. The oceans have 1,000 times more heat than the atmosphere. Clouds both trap heat and reflect incoming solar energy. And scientists still cannot separate human from natural factors in all this.

But Virginia Democrats insist there is a climate crisis, and are determined to end fossil fuels to prevent it.

Virginia’s “carbon-free” bills would shut down some 6,200 megawatts of coal-based electricity and ban construction of new gas-fired units. Meanwhile, China already has 900,000 MW of coal-fired power plants, has another 200,000 MW under construction, is planning an additional 150,000 MW (all in China), Greenpeace reports, and is building or financing numerous coal and gas power plants in Africa and Asia. India already has hundreds of coal-fired units and is planning nearly 400 more. China and India are building or planning to build hundreds of new airports, and to put millions more cars on their roads.

So even if CO2 does play more than a minor role in climate change, Virginia’s actions might reduce future warming by an undetectable 0.001 to 0.01 degree. The bill’s details are revealing, and troubling.

The nearly enacted law would close America’s newest and cleanest coal-fired power plant, unless it can slash CO2 emissions 83% by 2030, using still unproven “carbon capture and storage” technology. But even if it worked, that technology would cost millions per year to operate – and require a third of the power plant’s electricity output to operate. Talk about not being free, especially for local residents.

To replace all the eradicated electricity, Virginia energy companies would install 5,200 MW of offshore wind turbines – apparently GE 12 MW Haliade-X turbines manufactured in a new factory in Guangdong Province, due south of Wuhan. That would require 433 of these behemoths, each one rising 850 feet above the waves some 27 miles off the Norfolk-Virginia Beach coastline, in 50-70 feet of water.

Constant saltwater and frequent storms will corrode the turbines, causing them to perform worse every year. Actually getting 5,200 MW of electricity would require that the 433 turbines operate at 100% of rated capacity 24/7/365. If they work only half the time, Virginia would need 866 monster turbines.

Climate activists and Big Wind developers expect up to 30,000 MW of offshore wind along the East Coast by 2030. That could mean 2,500 gargantuan Heliade-X turbines! The impacts on radar, aviation, submarines, surface shipping and fishing would be enormous. Turbine blades would kill countless birds. Vibration noises and infrasound would impair whale and dolphin sonar navigation systems for miles.

Since these turbines would be in federal waters, the Interior Department, National Marine Fisheries Service and other federal agencies must fully and carefully evaluate their cumulative impacts on all these human activities and environmental values. They must also address the cumulative impacts of all the global mining, processing, manufacturing and other operations required to build and install the turbines.

These monster windmills will require millions of tons of concrete, steel, copper, rare earth elements, carbon-fiberglass composites and other raw materials. Obtaining them will require removing billions of tons of ore and associated rock, in new or expanded mines all around the world, but probably not in the United States. Wind (and solar) energy would be almost totally dependent on foreign materials, components and finished products – mostly Chinese. Pollution, workplace conditions, land and habitat destruction, child labor and human rights violations, cancers and other terminal diseases among workers and local communities, would be rampant, and abhorrent to most Americans.

Right now, there are few or no derrick barges capable of installing 12-MW turbines. Imagine how long it will take to install 400 to 2,500 of them along the East Coast – and repair or replace them as they age, or after a huge storm like the Great Atlantic Hurricane of 1944 wipes out offshore electricity generation.

The Clean Economy Act states that another 16,100 MW of fossil fuel replacement power would come from photovoltaic solar panels. Based on data for a 400-500 MW Spotsylvania County, Virginia, solar operation, those panels would completely blanket a land area 3 to 3.5 times larger than Washington, DC.

Arizona conditions don’t exist in Virginia. Clouds, nighttime, and sub-optimal sunshine during much of the day and year make it likely that these millions of panels will actually generate little more than 3,200 megawatts – unpredictably and unreliably. To get the full, legislated 16,100 MW of electricity, Virginia would have to cover up to 18 times the land area of Washington, DC with panels: some 700,000 acres.

Will Virginia require that all of its wind, solar and battery materials and components be responsibly sourced? Will it require independently verified certifications that none of them involved child labor, and all were produced in compliance with US and Virginia laws, regulations and ethical codes for workplace safety, fair wages, air and water pollution, wildlife preservation and mined lands reclamation?

Getting power from offshore wind and eastern region solar facilities to communities on the western side of the 2,200-mile-long Appalachian Trail will require many new transmission lines across the trail. Environmentalists have adamantly opposed gas pipelines that would pass 700 feet beneath the trail. How will they respond to multiple transmission lines and towers crossing the trail and impairing scenic views?

Wind, solar, battery and biofuel alternatives are simply not clean, green, renewable or sustainable. The Clean Economy Act represents greenwashing, virtue-signaling and government control at their worst. It replaces reliable, affordable electricity with expensive, unreliable power. Simply declaring, as this legislation repeatedly does, that all these actions are “in the public interest” does not make it so.

In Virginia and across America, liberal cities and counties have provided “sanctuary” status for illegal immigrants, including repeat criminals. Numerous Virginia communities have declared themselves Second Amendment sanctuaries. Perhaps it is time for them to resist the onslaught of climate alarmism and pseudo-renewable energy craziness – by declaring themselves fossil fuel sanctuaries, as well.