Paul Driessen
|
Posted: May 05, 2016 12:01 AM
Share   Tweet
The opinions expressed by columnists are their own and do not necessarily represent the views of Townhall.com. 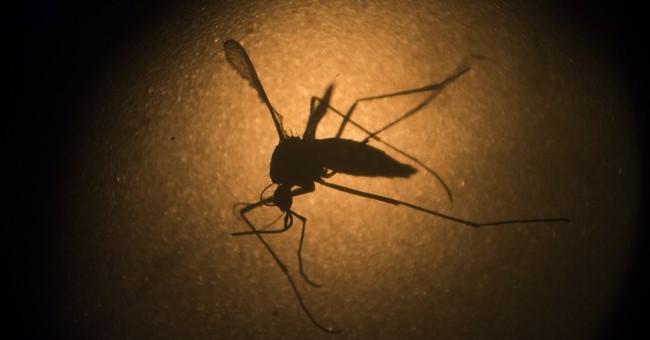 Editor's Note: This column was co-authored by Robert Novak.

The Zika virus is increasingly linked to serious neurological complications for pregnant women and microcephaly in newborns: smaller than normal heads and brains. It also affects areas of fetal brains that control basic muscular, motor, speech and other functions, leading to severe debilities that require expensive care throughout a person’s life.

The disease is becoming a crisis in Brazil, site of this year’s Summer Olympic Games. But cases continue to be reported in the United States, primarily among women who have traveled abroad, and Zika is reaching serious levels in Puerto Rico, other US territories, and many parts of Central and South America.

Stopping its spread is an urgent public health matter. President Obama has asked Congress for $1.9 billion in new funding, to find better diagnostic tests to detect Zika, develop a vaccine against the virus, and control the mosquitoes that are the primary vector for the vicious virus.

Not surprisingly, the request has spawned new budget battles in Washington. The White House and congressional Democrats want to spend new money, while Republicans insist there is already plenty of money in the budget, plenty wasted that could be better allocated, and plenty being spent on climate change and other programs that have a far lower priority than this public health menace.

Other observers say Zika is being used as another opportunity for government agencies to expand their budgets, personnel and empires. Certain agencies, they note, are blaming “mosquitoes” in general and even climate change, or promoting high-tech “solutions” that may never work and will take years to develop, test and employ on national or global scales.

Meanwhile, much can be done right now, to reduce mosquito populations and slash the incidence and spread of this disease, for far less than $2 billion. It requires smarter policies, more focused efforts.

Zika is not spread by generic “mosquitoes.” Its primary carrier is a very particular blood-sucker with unusual habits and habitats. Aedes aegypti is known as the yellow fever mosquito, because it is the principal avenue for spreading that nasty disease, which causes fevers, chills, nausea, muscle pains, and liver and kidney damage. A vaccine exists, but yellow fever still kills up to 30,000 people annually.

Ae. aegypti also spread dengue fever, another painful, debilitating disease that can recur for years; there is no vaccine, and it sickens nearly 100 million people a year, killing some 25,000. The flying killers also infect people with chikungunya, which often causes severe fever, headaches, muscle and joint pain, rashes and other non-lethal problems.

These mosquitoes were nearly eradicated, especially in Brazil, during the 1960s. Unfortunately, control bred complacency, and Ae. aegypti is again a dangerous scourge in Brazil, other South and Central American countries, Puerto Rico, Caribbean islands, Africa and Asia.

Their potential range includes the southeastern United States and southern Europe, they are actually found in some of these southern US states and Hawaii, and some do carry Zika and other diseases. All these diseases can infect blood supplies, making transfusions risky and necessitating that blood be imported from safe locales that may not have sufficient supplies themselves.

Summer Olympics fans and athletes could get infected and carry these diseases from Brazil back to their home countries. Thousands of other travelers could also spread all these diseases. The prospect has health officials worried. However, Ae. aegypti’s habits offer opportunities for controlling them.

They live close to houses, rarely fly more than 80 feet from where they hatch, bite during the day, and hatch from eggs laid in tires, cans, jars, flower pots, vases, bromeliads, holes in trees, and almost any other containers that hold water, indoors and outdoors, in backyards and junkyards.

That means national and international health ministries, neighborhoods and individual families can undertake simple, low-cost actions that will bring rapid, significant returns with limited time, money and resources – by eliminating mosquitoes and keeping them away from people. They should start now.

1) Educate politicians, local leaders, teachers, neighborhood organizations and citizens about the dangers posed by mosquitoes and the diseases they carry – and about what they can do to help. Launch and coordinate home and neighborhood programs, and stress why they must continue well into the future.

Used properly, today’s larvae and adult mosquito killing chemicals are safe – especially compared to the misery, death and long-term care that Ae. aegypti and other mosquitoes spread. Centers for Disease Control, National Institutes of Health and other studies have determined that the most commonly used larvicides (BTI and Temephos, aka Abate) are safe for humans and mammals, even in drinking water.

3) Prevent mosquito bites, to break the disease transmission cycle. This is especially important for people attending the Olympics or vacationing where problems exist. You don’t want to take diseases home.

Use personal insect repellants, preferably those containing DEET, even while indoors, and keep skin covered with clothing. To keep mosquitoes out of homes, make sure doors and windows have screens. For homes without screens, spatial repellents like DDT can be sprayed on walls and doorways.

4) Employ cell phone GPS systems to locate and monitor mosquito populations, and significant biting and disease outbreaks. Every citizen can help with this. Tie these efforts into local or national databases – and into monitoring and surveillance programs that can dispatch rapid response teams.

5) Test people for antibodies, especially pregnant women, to determine whether they have Zika or other mosquito-transmitted diseases. The RT-PCR test can find Zika proteins and genetic material in people, and in the brains and placentas of infants and miscarried fetuses. It can also rule out dengue, yellow and chikungunya fever viruses. Developing better, more rapid detection tests will be money well spent.

This multi-pronged approach is true “integrated vector and disease control.” It will bring rapid returns.

Nonetheless, at least two high-tech, non-chemical “solutions” have been proposed. They involve releasing male mosquitoes that have been sterilized by radiation, so they cannot mate successfully – or genetically modified so their progeny die before reaching maturity.

At least one experimental GMO effort has been field-tested, somewhat successfully, with gradual but noticeable reductions in mosquito populations in test areas. Since male mosquitoes don’t bite, releasing them into urban areas should pose few health risks. The concepts have researchers, technocrats and bureaucrats salivating over potential budgets and personnel increases.

However, field tests are just that: tests. The experimental programs must still survive long US Food and Drug Administration and Agriculture Department approval processes, budgetary constraints, anti-biotechnology and anti-radiation activism, and similar delays at the international level.

Neither approach can help in the near term, across the sprawling Rio de Janeiro Olympics venues, urban areas and shantytowns – or across millions of square miles in Latin America, Africa, Asia and beyond.

We cannot afford to deemphasize or shortchange the less sexy, but proven, highly effective, truly integrated vector and disease control programs described above. These strategies can and must be employed now, to eliminate Aedes aegypti mosquitoes and the horrible diseases they spread.

They will save lives now – in time for the Olympics, before these bugs and diseases claim more victims.