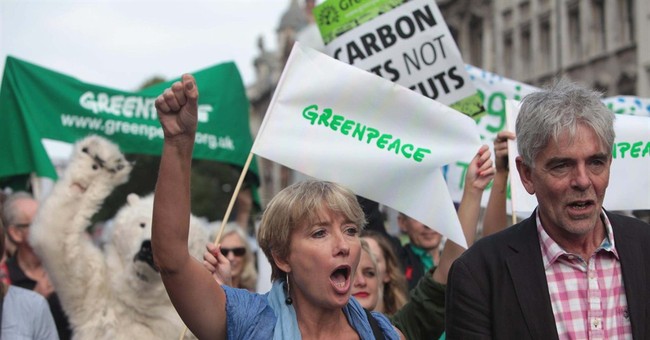 Things are not going well for Climate Chaos, Inc. The Environmental Protection Agency is implementing its carbon dioxide regulations, and President Obama wants to make more Alaska oil and gas prospects off limits. But elsewhere the climate alarm industry is under siege – and rightfully so.

Global warming predictions have become increasingly amusing, bizarre and disconnected from real-world climate and weather. The Intergovernmental Panel on Climate Change has confessed that its true goal is transforming the world’s economy and redistributing its wealth. More people are realizing that the actual problem is not climate change, which has been ongoing throughout history; it is costly policies imposed in the name of preventing change: policies that too often destroy jobs, perpetuate poverty and kill people.

Those perceptions are reinforced by recent studies that found climate researchers have systematically revised actual measured temperatures upward to fit a global warming narrative for Australia, Paraguay, the Arctic and elsewhere. Another study, “Why models run hot: Results from an irreducibly simple climate model,” concluded that, once discrepancies in IPCC computer models are taken into account, the impact of CO2-driven manmade global warming over the next century (and beyond) is likely to be “no more than one-third to one-half of the IPCC’s current projections” – that is, just 1-2 degrees C (2-4 deg F) by 2100! That’s akin to the Roman and Medieval Warm Periods and would be beneficial, not harmful.

Written by Christopher Monckton, Willie Soon, David Legates and William Briggs, the study was published in the January 2015 Science Bulletin of the Chinese Academy of Sciences. Incredibly, it has already received over 10,000 views – thousands more than most scientific papers ever receive.

Instead of critiquing the paper, climate alarmists attacked its authors. Climate Investigations Center executive director (and former top Greenpeace official) Kert Davies told the Boston Globe it “simply cannot be true” that the authors have no conflict of interest over their study, considering their alleged industry funding sources and outside consulting fees. Davies singled out Dr. Willie Soon, saying the Harvard researcher received more than $1 million from companies that support studies critical of manmade climate change claims. An allied group launched a petition drive to have Dr. Soon fired.

Davies’ libelous assertions have no basis in fact. Not one of these four authors received a dime in grants or other payments for researching and writing their climate models paper. Every one of them did the work on his own time. The only money contributed to the Science Bulletin effort went to paying the “public access” fees, so that people could read their study for free.

I know these men and their work. Their integrity and devotion to the scientific method are beyond reproach. They go where their research takes them and refuse to bend their science or conclusions to secure grants, toe a particular line on global warming, or fit industry, government or other viewpoints.

Regarding Dr. Soon’s supposed “track record of accepting energy-industry grants,” the $1 million over a period of years went to the Harvard-Smithsonian Center for Astrophysics, which took around 40% of the total off the top, for “overhead.” The details are all open public records. Not a dime went to this paper.

But since Davies raised the issues of money, conflicts of interest, failures to disclose financing, and how money supposedly influences science – let us explore those topics from the other side of the fence.

Climate Crisis, Inc. has a huge vested interest in climate alarmism – not merely part of $1 million over a ten-year span, but hundreds of billions of dollars in government, industry, foundation and other money during the past couple decades. Some of it is open and transparent, but much is hidden and suspect.

Between 2003 and 2010, the US government alone spent over $105 billion in taxpayer funds on climate and renewable energy projects. The European Union and other entities spent billions more. Most of the money went to modelers, scientists, other researchers and their agencies and universities; to renewable energy companies for subsidies and loan guarantees on projects that receive exemptions from endangered species and human health laws and penalties that apply to fossil fuel companies; and even to environmental pressure groups that applaud these actions, demand more and drive public policies.

Billions more went to government regulators, who coordinate many of these activities and develop regulations that are often based on secretive, deceptive pre-ordained “science,” sue-and-settle lawsuits devised by con artist John Beale, and other tactics. Politicians receive millions in campaign cash and in-kind help from these organizations and their unions, to keep them in office and the gravy train on track.

The American Lung Association supports EPA climate policies – but never mentions its $25 million in EPA grants over the past 15 years. Overall, during this time, the ALA received 591 federal grants totaling $43 million, Big Green foundations bankrolled it with an additional $76 million, and EPA paid $181 million to 15 of its Clean Air Scientific Advisory Committee members who regularly vote with it.

For years, Greenpeace has used Desmogblog, ExxonSecrets, Polluterwatch and other front-group websites to attack scientists and others who challenge its tactics and policies. Greenpeace USA alone had income totaling $32,791,149 in 2012, Ron Arnold and I note in Cracking Big Green.

It gets even more outrageous. One of the websites attacking Dr. Soon is funded by George Soros; it works hard to gag meteorologists who disagree with climate alarmists. And to top it off, Davies filed a FOIA request against Dr. Soon and six other climate scientists, demanding that they release all their emails and financial records. But meanwhile he keeps his Climate Investigations Center funding top secret (the website is registered to Greenpeace and the Center is known to be a Rainbow Warriors front group) – and the scientists getting all our taxpayer money claim their raw data, computer codes and CO2-driven algorithms are private property, and exempt from FOIA and even U.S. Congress requests.

By all means, let’s have honesty, integrity, transparency and accountability – in our climate science and government regulatory processes. Let’s end the conflicts of interest, have robust debates, and ensure that sound science (rather than government, foundation or Russian cash) drives our public laws and policies.

And let’s begin where the real money and power are found.