Greenpeace Showcases its Anti-Human Side 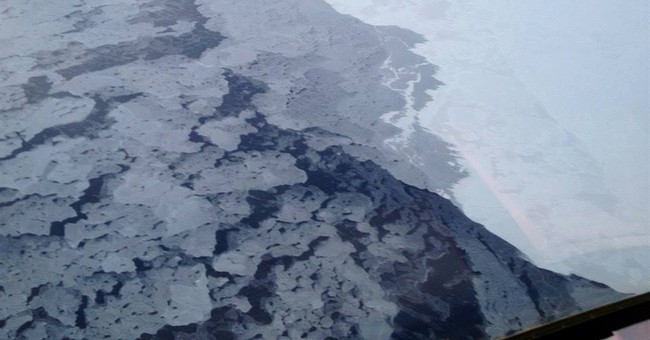 It was a surreal experience. As the Heartland Institute’s hugely successful Ninth International Conference on Climate Change ended, I agreed to let Greenpeace activist Connor Gibson interview me.

I’d just given a presentation on Big Green’s lethal agenda, describing how “dangerous manmade climate change” is just one of many mantras invoked by the Deep Ecology movement to advance an agenda that is anti-energy, anti-people, and opposed to modern economies, technologies and civilizations. As readers of my book and articles know, this unaccountable movement inflicts lethal consequences on millions of people every year – the result of malaria, malnutrition, lung and intestinal diseases, and other afflictions of rampant poverty imposed or perpetuated by unelected and unaccountable eco-imperialists.

“I read your book,” he told me, and attended some of the talks by globally renowned experts on climate, weather, species extinction, human health and other topics. If so, he obviously hadn’t listened, or had simply chosen to ignore every fact and explanation presented, as not in accord with his ideologies. That would certainly include the keynote address by Greenpeace cofounder Patrick Moore, explaining how he left the organization over its increasingly bizarre, irrational and inhumane attitudes and actions.

CARTOONS | Michael Ramirez
View Cartoon
Gibson’s “interview” quickly became a prosecutorial interrogation, marked by ignorance or denial of basic facts and repeated interruptions to contest my observations. He insisted that hurricanes are more frequent and devastating than ever before (though not one Category 3 or higher ‘cane has made US landfall in eight-plus years, breaking a century-long record, as a panel discussion I had chaired that day made clear); wildfires are worsening (though their number and acres burned are down significantly, and could be driven lower via more intelligent forest management and fire suppression policies); and rising seas will soon drown coastal communities (hardly likely at the current rate of seven inches per century).
He likewise denied the 18-year pause in global warming, even though the IPCC and other alarmists have finally admitted it is real. My references to conference participants and the exhaustive NIPCC report were met with claims that it had not been peer-reviewed. Perhaps not by the closed circle of well-funded IPCC scientists, bureaucrats and activists who rubberstamp one another’s work – while refusing to share data and methodologies, allow outside experts to review their work products, attend Heartland conferences, or debate NIPCC scientists in any forums. (They know their data, claims, conclusions and economy-killing recommendations cannot withstand scrutiny.) However, the NIPCC reports and the studies they laboriously analyze and summarize were fully peer-reviewed by numerous scientists.

(Alarmists say twenty years of warming is proof that Earth is at a “tipping point” for runaway climate chaos, requiring the end of fossil fuels. They say the subsequent 18 years of no warming, and even a slight cooling, is irrelevant and meaningless. Whom do you believe, they ask? Us alarmists and our computer models, or a bunch of “fringe” scientists who cite actual temperature and other evidence?)

After twenty minutes, Gibson got to his real issue: money. Where does CFACT get its funding? The Koch brothers and ExxonMobil? That would be nice, to compliment the cash that Exxon gives to radical green groups. But no, they don’t support us. My mention of Chesapeake Energy’s $26 million to the Sierra Club, to fund anti-coal campaigns, did force him to admit this is a problem for Big Green’s social responsibility mantra. But when I noted Tom Steyer’s billions from hedge fund investments in coal mines and power plants, Gibson insisted that this money was second-hand and thus pure – whereas Koch money was earned directly (via producing energy and creating jobs) and thus was tainted by “self-interest.”

That “ethical” distinction without a difference would also apply, I suppose, to the tens of millions of dollars that Greenpeace and the Greenpeace Fund have received from fat-cat liberal foundations that are heavily invested in fossil fuel and other corporate securities.

Gibson also brought up his organization’s attempted 2003 anti-chemicals rally in New Jersey’s Liberty Park. The event turned into a resounding protest against Greenpeace, when scores of black and Hispanic demonstrators from the Congress of Racial Equality completely flummoxed the Rainbow Warriors with stilt walkers, bongo drums and chants of “Hey hey Greenpeace, what do you say? How many children did you kill today?” He dropped his inquisition when I pointed out that I’m a life-member of CORE.

Indeed, what Gibson really did not want to discuss were the destructive, even lethal effects of Greenpeace policies and campaigns. Some 2.5 billion people still do not have electricity or get it only sporadically, and so must burn wood and dung for heating and cooking, which results in widespread lung diseases that kill two to four million people every year. No electricity also means no refrigeration, safe water or decent hospitals, which means virulent intestinal diseases kill another two million annually.

Worldwide, some two billion people still live in malaria-infested areas, 500 million get the disease every year, and nearly a million die. A primary reason is their inability to acquire insecticides to kill mosquitoes and DDT to keep the flying killers out of homes. Another billion people face malnutrition and Vitamin A deficiency that causes blindness and death in children. In fact, eight million children died from Vitamin A deficiency since Golden Rice was invented.

But the Rainbow Warriors and other callous eco-imperialists wage well-funded campaigns against Golden Rice, insecticides and DDT, and coal-fired, gas-fueled, hydroelectric and nuclear power generation – perpetuating poverty, malnutrition, disease, misery and death. To them, a planet free from the wildly conjectural and exaggerated dangers of these technologies is far more important than the billions of lives improved and millions of lives saved by them. It is a vicious war on women and children, who die in the greatest numbers from malaria, lung infections, malnutrition and severe diarrhea.

Greenpeace actions are akin to denying chemotherapy to cancer patients or antibiotics to pneumonia sufferers. Their anti-technology campaigns are eco-manslaughter and should no longer be tolerated.

Personally, I cannot imagine life without modern technologies. I can’t imagine living in electricity-free, disease-ridden, malnourished, polluted poor nation squalor. As my grandmother used to tell me, “The only good thing about the good old days is that they’re gone.”

But of course, Gibson has a modern malaria-free home, superb cuisine, access to affordable, reliable electricity and transportation, a fancy digital camera and a cool cell phone. He would never give them up, nor would I ask him to. However, some of my African friends would gladly let him “enjoy” a few months in a state-of-the-art, mosquito-infested hut, rely solely on a bed net, drink parasite-infested water, breathe polluted smoke from cooking fires, and walk miles to a clinic when he gets malaria, TB or dysentery – hoping the nurse has some non-fake medicines to treat him. I’d gladly help make the arrangements.

Financially motivated innovators, entrepreneurs and companies have worked wonders to improve and save the lives of billions. Yes, there have been accidents, some of which have killed hundreds of people or thousands of animals. However, the real killers are governments and anti-technology nonprofit activist corporations. Their death tolls are in the millions – via wars and through misguided or intentional policies that institute or perpetuate starvation and disease from denial of food and life-saving technologies.

Gibson is a bright guy. Perhaps one day he will understand all of this, hopefully before the death toll rises much higher. To that end, he and his alarmist colleagues would profit mightily from reading my Eco-Imperialism book and new report Three Faces of Sustainability; the new book About Face: Why the world needs more carbon dioxide; and several recent reports: Climate Change Reconsidered: Physical Science; CCR: Biological Impacts, and Climate Catastrophe: A superstorm for global warming research.

Countless jobs, living standards and lives hang in the balance.