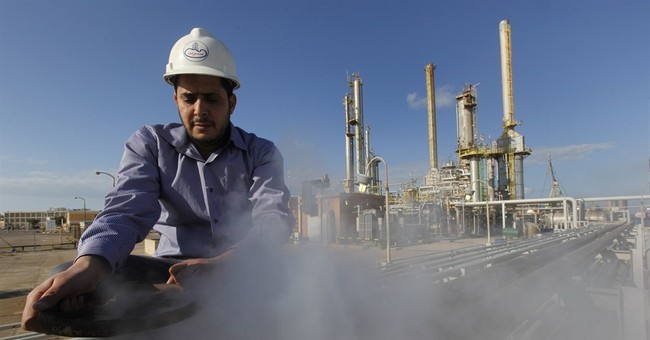 The midterm elections underscore how much Americans value energy, job and economic revival – and how much they want less Washington control of their lives, livelihoods, and dreams for their children and grandchildren. They also reflect the waning influence of radical Obama and Steyer climate change and anti-energy environmentalist elites. If ever there was a time to end the ban on oil exports, it’s now.

With U.S. demand for oil products falling, production rising, and myriad studies making a strong case for selling American crude abroad, the president and Congress should terminate the ban as soon as possible.

The nation’s demand for crude oil fell by 3.5 percent in September versus the same month a year ago. Gasoline demand fell by 3.0 percent because of efficiency gains in cars and trucks, coupled with a still weak economy, abominable 62.8 percent labor force participation rate, and too many people forced to work part-time, for lower wages and fewer benefits.

Meanwhile, U.S. crude oil production soared in September, climbing to its highest level in 29 years – and demolishing claims that we are rapidly exhausting Earth’s petroleum. During September, the United States produced 8.8 million barrels of oil per day – an increase of nearly 14 percent over the previous year and 58% since 2005. In fact, the United States has now replaced Saudi Arabia as the world’s #1 oil producer.

The International Energy Agency predicts that U.S. oil production will likely exceed 9 million barrels per day by the end of the year, with imported energy liquids reaching a remarkable low of 21 percent of our consumption in 2015, compared to 60 percent in 2006. Hydraulic fracturing played the key role in this.

That brings us to the price component of Economics 101. Declining demand and rising supplies tend to drive prices down, and indeed crude prices plunged 28 percent – from $105 per barrel in January to $76 in November 2014. Prices for gasoline, heating oil and other petroleum-related commodities also dropped significantly. That’s a huge boon to consumers, from families to refiners to petrochemical makers.

The AAA motorists club estimates that every one-cent decline in the pump price of gasoline feeds an extra $1 billion into the USA economy. The 71-cent drop per gallon has injected $71 billion in actual stimulus money, adding much-needed disposable income to households whose budgets have been pinched by higher taxes and rising costs for food, clothing and healthcare.

Interestingly, the lower crude oil prices have occurred during a time of political unrest. In the past, crude prices have tended to climb rapidly when armies were on the march. Today, however, oil production in the United States and Canada appears to have ended the connection between military clashes and prices. Despite ISIS butchery in Syria and Iraq, Israel-Palestinian dissension, disputes over the South China Sea, Russia’s incursions into Ukraine, Islamist murders and kidnappings in Nigeria, and saber-rattling in North Korea, the global price of crude oil has declined steadily all year.

Increased U.S. oil and natural gas production have also nearly single-handedly lifted America’s economy out of its recessionary doldrums. A U.S. Department of Energy report found that the number of oil and natural gas jobs grew 40 times faster than jobs in the rest of the economy from 2007 to 2012. Imagine how bad the Obama economy would be if it weren’t for the oil and gas industry that the President, his radical voter base and most of his cabinet secretaries still despise.

Since 2012, the good news has continued. In the booming Marcellus Shale region of Pennsylvania, Ohio and West Virginia, the number of labor hours worked rose by 40 percent from 2012 to 2013, marking a new all-time high. (New York could also share in this job and revenue bonanza, but its political elites continue to block any and all fracking, severely hurting blue collar and farm families in western NY State.)

Numbers like these make it easy to see the benefits of U.S. oil and natural gas production for the economy. Adding crude oil exports into the mix would multiply the benefits.

A recent study by the economic analysis firm IHS Global concludes that allowing crude oil exports would lower gasoline prices by an additional 8 cents per gallon and support an additional 964,000 jobs in 2018. Moreover, it said, repealing the ban on exports would benefit all 50 states, not just those that actively produce oil and natural gas. The National Economic Research Associates (NERA) says eliminating the oil export ban would create high-paying jobs for almost 400,000 unemployed American workers, while the Brookings Institution calculates that ending the ban would boost America’s GDP by some $1.8 trillion!

Being energy-rich also gives America more leverage internationally. Consider the impact that crude oil and natural gas exports could have on Russia’s territorial ambitions. Up to half of Mr. Putin’s budget was fueled by energy exports in 2012. If U.S. energy supplies could be exported to our allies in Eastern Europe, until they can launch their own fracking revolutions, Russia’s ability to use energy exports as a political weapon would be constrained, and Putin’s financial strength diminished.

Some major oil and gas users worry that even limited exports of U.S. crude would reduce supplies and send prices back up. Petrochemical and other manufacturers have created jobs and profited mightily from fracking, soaring domestic production, and sharply lower energy and feedstock prices, so one can understand their fears. However, lifting the ban on crude oil exports will create new markets and convince more voters and politicians to support opening more areas to environmentally sound drilling and hydraulic fracturing, and thereby fostering further exploration and production that will keep prices low.

Biofuel producers might also oppose ending the ban. The surge in oil and gas production makes it even harder to defend spending billions of taxpayer and consumer dollars on fuels that require some 40 million acres of farmland, plus vast amounts of water, fertilizer, pesticides and fossil fuel energy to produce. Their claims that biofuels help prevent climate change have become just as tedious and untenable. Global temperatures haven’t budged in 18 years, it’s more than nine years since a Category 3-5 hurricane made U.S. landfall, and any actual human influences on the global climate are not even detectable amid natural climate blips and fluctuations. It’s time to end biofuel mandates and subsidies, and focus on fossil fuels.

The U.S. prohibition on crude oil exports is a relic of the 1970s. It was enacted in response to the Arab Oil Embargo and gasoline lines that snaked through the streets of major U.S. cities. Those days are gone.

If oil and natural gas exports were allowed, the United States could exert its new energy influence throughout the world without firing a shot. This is a superb opportunity for a newly Republican and bipartisan Congress – and a President who up to now has been more ideological and defiant than most American citizens can accept. Congress and President Obama should speed oil exports now.