Pat Nolan is the Director of the American Conservative Union Foundation’s Center for Criminal Justice Reform. Launched in 2014, The Center will inform and mobilize public support for criminal justice reforms based on conservative principles, and will work with government officials to effectively implement those reforms.

Nolan is a leading voice on criminal justice reform, highlighting the skyrocketing costs of prison, fiscal responsibility in the criminal justice system and reforms for non-violent offenders. He moderated a prominent panel at CPAC 2014 on prison reform, featuring Texas Gov. Rick Perry that received widespread media attention. He is a leader of the Right on Crime project— a national movement of conservative leaders supporting sensible and proven reforms to our criminal justice system – policies that will contain prison costs while keeping the public safe.

Previously, he served for 15 years in the California State Assembly, four of those as the Assembly Republican Leader. He was a leader on crime issues, particularly on behalf of victims’ rights, was one of the original sponsors of the Victims’ Bill of Rights (Proposition 15), and was awarded the “Victims Advocate Award” by Parents of Murdered Children.

Nolan was targeted for prosecution for a campaign contribution he accepted which turned out to be part of an FBI sting. He pleaded guilty to one count of racketeering and served 29 months in federal custody.

Before entering prison a friend his told him that “for centuries Christians have left their day-to-day world, humbled themselves, done menial labor, prayed and studied their faith. We call that a monastery. View this time as your monastic experience.” Pat credits this friend with helping him enter prison in a frame of mind which allowed him to put the time to good use. Pat says he drew great comfort from the story of Joseph in Genesis. “Man intended it for evil, but God intended it for good.”

Nolan is the author of When Prisoners Return, which describes the important role of the Church in helping prisoners get back on their feet after they are released. He is a frequent expert witness at Congressional hearings on important issues such as prison work programs, juvenile justice, prison safety, offender reintegration and religious freedom. He has lectured at many judicial conferences and legal conventions. He has coauthored articles for the Notre Dame Law School Journal of Law, Ethics and Public Policy and the Regent Law School Law Review.

Nolan was member of the National Prison Rape Elimination Commission, appointed by the Speaker of the House of Representatives. He also served on the National Commission on Safety and Abuse in America’s Prisons. Pat is a leader in the Right on Crime project—a movement of conservative leaders who advocate for reform of the criminal justice system.

Nolan was honored by the Freda Utley Foundation, the first American to receive this prestigious international honor. He also received the Justice Roundtable’s Advocate Award for his “tireless work championing criminal justice reform.”

His opinion pieces have appeared in numerous periodicals including the Washington Post, the Los Angeles Times, the National Law Journal, National Review Online, and the Washington Times. He is a frequent guest on television and radio shows, including Fox Network News, Lou Dobbs, Religion and Ethics Newsweekly, Michael Reagan, Sean Hannity, Montel Williams and Ollie North.

Pat earned both his Bachelor of Arts in Political Science and his Juris Doctorate at the University of Southern California. Pat and his wife Gail have three children. The Nolans live in Leesburg, Virginia and are members of the St. John the Apostle Parish. 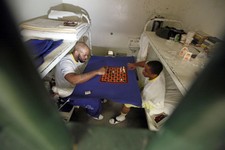 Fathers Day Is Important – Even for Fathers in Prison
June 17, 2018
Trump Should Look to the States for Successful Law and Order Policies
September 12, 2016 |
Uniting Children with Their Fathers on Father’s Day
June 19, 2015 |
Commentary Archives
CARTOONS | Tom Stiglich
View Cartoon