Fathers Day Is Important – Even for Fathers in Prison

Pat Nolan
|
Posted: Jun 17, 2018 12:01 AM
Share   Tweet
The opinions expressed by columnists are their own and do not necessarily represent the views of Townhall.com. 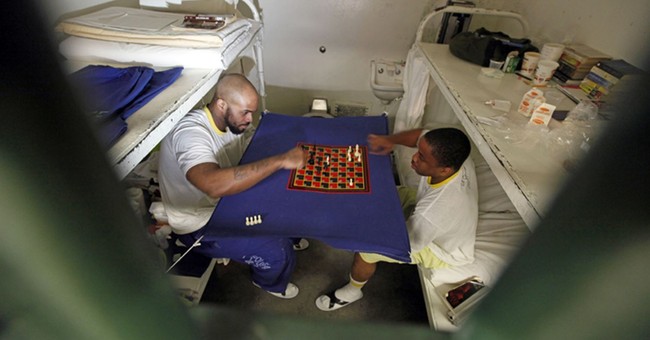 This week families across America will gather to celebrate the role our fathers play in our lives. While it is fun to gather around the grill and enjoy a nice meal together, it is also a good time to acknowledge the important and unique influence of our fathers.

And it is also a time to remember those fathers who are missing from the family table. The “empty chairs” of fathers lost while defending our country, law enforcement officers killed while protecting our communities, or fathers who were victims of violent crimes or tragic accidents. They all leave voids in our hearts and at our tables.

There is another category of fathers who are absent from their family’s dinner table today – fathers in prison. I am not asking you to feel sorry for these men. They are paying the price for breaking the law. However, I hope you’ll take some time to think about the impact that their absence has on their families, and how it impacts your neighborhood after they are released without rehabilitation.

You see, 95 percent of all prisoners will serve their sentences and then return to the community. It doesn’t make headlines when an ex-offender gets a job, supports his family, and becomes a responsible member of the community. Yet, thousands of our neighbors have paid their debt to society and are now good citizens.

They are good employees who pay their taxes and help us build better and safer communities. Think of Mark Wahlberg, Wesley Snipes, and Tim Allen. They all did time in prison, and went on to be solid citizens that any of us would be proud to have as neighbors. An important factor in their success was that they remained in touch with their families.

Studies have consistently found that prisoners who maintain close contact with their family members while incarcerated have better post-release outcomes and lower recidivism rates.

The research shows that when returning inmates have a supportive family they are more likely to find a job, less likely to use drugs, and less likely to be involved in criminal activities. Studies also show that children of inmates who are able to visit with their parents have increased cognitive skills, improved academic self-esteem, greater self-control, and change schools much less often. The improvement of the children has an amazing impact on the incarcerated parent, too, with significantly reduced recidivism of the parent after release.

So, you would expect that prisons would do all they can to encourage family visits and contact with inmates. But you would be wrong, and that is bad for all of us.

But those shortsighted policies will likely change soon. Legislation is moving through Congress with strong bipartisan support to improve the way federal prisons help inmates maintain contact with their families. The House recently passed the FIRST STEP Act, which will strengthen families by:

• Placing inmates closer to their families (with exceptions for security concerns).

• Forming partnerships with faith-based and community volunteers to provide programs to prepare inmates for release - at little cost to the government.

• Allowing volunteers who work with inmates inside prison to continue to mentor them when they are released.

• Prohibiting the barbaric but common practice of shackling pregnant women to their beds during childbirth.

• Allowing terminally ill inmates to return home to be with their families and friends in their final days.

And for those inmates who participate in programs that prepare them to return to their communities - and who have no security incidents – to be placed in a halfway house or in home confinement earlier to put them closer to their families, and to look for work, get a driver’s license, open a bank account, find a church or synagogue and other activities that will help them stay on the straight and narrow after they finish their sentence. It only makes sense that prisoners who prove ready and willing to make the most of their second chance should be given an opportunity to get back on their feet.

This FIRST STEP Act has the strong support of President Trump, and was passed by the House 360-59, with all but two Republicans voting for it, and the overwhelming majority of Democrats in support as well.

So, after enjoying your Father’s Day, I hope you will encourage support for the FIRST STEP Act. The inmates and their families will be better neighbors because of it.