The Bankrupt PIGS of Europe 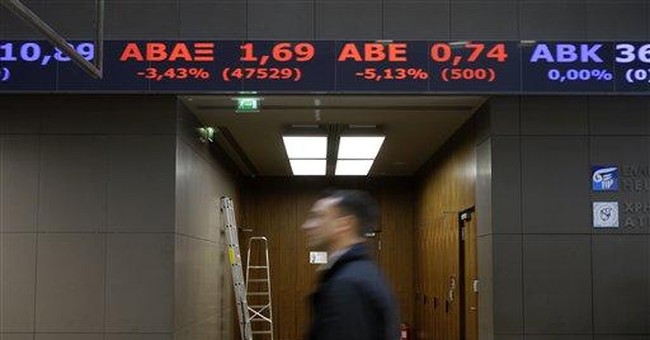 They are called the PIGS -- Portugal, Ireland, Greece, Spain. What they have in common is that all are facing deficits and debts that could bring on national defaults and break up the European Union.

What brought the PIGS to the edge of the abyss?

All are neo-socialist states that provide welfare for poor people, generous unemployment, universal health care, early retirement and comfortable pensions. Most consume 40 percent to 50 percent of their gross domestic product annually, a crushing burden on the private sector.

Dying populations is a second cause. After two world wars, the Europeans lost their faith and embraced hedonism and materialism, la dolce vita. Large families fell out of favor. Women put off marriage and babies, and went to work. Birth control and abortion were made readily available in every country and, if not, just across the border.

For 30 years, the fertility rate of Europe has been below the 2.1 children per woman necessary to replace a population. In Russia and Ukraine, a million people disappear yearly. In Western Europe, the passing of the native-born goes on quietly, as Third World peoples come to fill the empty spaces left by the aborted and unconceived.

Turks are in Germany. Pakistanis, Indians, Arabs and Caribbean peoples are in Britain. Algerians, Tunisians and Moroccans occupy the southern coast of France and the banlieues around Paris.

These newcomers have neither the education nor skills of the Europeans. Hence, they earn less and contribute less in taxes, but consume more per capita in social benefits.

As the number of young entering the European labor forces shrinks, the number of seniors and aged grows. And thanks to advances in medicine, these retirees live lengthening lives. Thus the burden of pensions and health care grows steadily and the need for higher taxes and larger worker contributions increases.

Then there is globalization. In Europe, wages and taxes are high, regulations heavy, unions strong, and lawyers ubiquitous. Manufacturers, to cut costs, have been outsourcing production to where the labor is cheap and abundant, the unions are nonexistent or weak, and health, safety and environmental regulations are lax. Welcome to China.

Greece is the first European nation to hit the wall. As an EU member state, she is obligated to keep her deficit to 3 percent of GDP. But this year's is 12.7 percent, and Athens needs to issue $75 billion in bonds alone to finance the deficit and roll over debt.

The markets, however, are rating Greek bonds as risky bonds. To borrow, Athens must pay more than twice the interest rate Germany pays. Faced with strikes by public employees and students, Athens appears to lack the political will to make the cuts necessary to bring the budget back toward balance.

As Portugal, Ireland and Spain gaze on, Greece approaches a moment of truth. Should she default, their bonds, too, will plunge in value out of fear of a copycat default, and the interest rate they pay would also rise. They, too, might then take the Argentine road.

The EU's crisis would then be like a crisis in the United States should California default on its state bonds and interest rates on other municipal bonds surged to double digits.

Is there a way out?

One option is for the EU to bail out Greece with a huge loan. But if Greece cannot meet her debt obligations now, how could she pay back the loan? And if the EU cannot compel Greece to make deep budget cuts today, what leverage would the EU have after bailing out Athens and removing today's pressure on the government?

A second option is to call in the International Monetary Fund, which imposes tough conditions on nations receiving IMF loans -- the Third World therapy. But problems would arise here, too.

First, it would be an admission that the EU cannot manage its own household. Second, the largest contributor to the IMF is Uncle Sam.

Why should America bail out Greece, when the EU is larger and richer and did not help bail out California in 2009? The stimulus bill did that in 2009, to which Europe contributed nothing.

Where Greece is at today, however, we shall all arrive tomorrow.

In every Western nation, government is growing beyond the capacity of taxpayers to bear. Deficits and debt are surging. Not enough children are being born to replace parents. The immigrant poor who consume more than they contribute are coming to take the empty places. Seniors and elderly are growing as a share of the population. Companies are saying goodbye to the West and moving offshore to low-wage lands.

The West is approaching a crisis of solvency and of democracy. We shall see if democracy, which grew popular lavishing benefits upon all, is strong enough to start clawing them away. Or will democracy try to keep piling the burden on the producers until they rebel or depart?