Neil Patel
|
Posted: Mar 13, 2020 12:01 AM
Share   Tweet
The opinions expressed by columnists are their own and do not necessarily represent the views of Townhall.com. 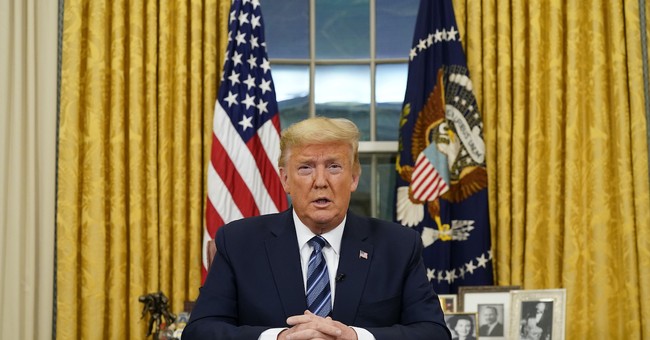 One of the first rules of weathering a crisis is to remain calm. Freaking out never helps. It's not yet clear how big of a crisis the new coronavirus will be, but panicking over even the most minor matters has become an American specialty these last few years. In our politics, we have jumped from faux crisis to faux crisis with such speed that most Americans have started tuning it out. This is not the ideal state of affairs as we prepare to enter a period of potential real crisis that could affect millions of people and result in the loss of many lives. Our country has a tradition of coming together to face crises, but this time, it's hard to imagine. Let's hope our leaders -- and all of us -- can rise to the challenge.

People want stable, competent leadership at a time like this. Our nation's top leaders have not excelled at displaying any of these traits the past few years. Our times have instead been marked by bickering, nasty tweets and a total lack of self-control. Many Democrats view this behavior as driven completely by President Donald Trump. Nothing could be further from the truth. The president has, of course, played a huge part, but the leaders of the Democratic Party have never treated Trump as a legitimate president. From the moment he was elected, they have tried to undermine and undercut him. Our country has suffered as a result. Nothing they can do now will remove Trump as the guy who's going to lead our country through the pandemic we are facing. It's past time for all parties to recognize that.

The first step is for our top political leaders -- from President Trump to Speaker Nancy Pelosi -- to put the petty politics on hold and start managing this crisis. The signs here are mixed. It was good that Congress and the President were able to enact an emergency funding bill to respond to the coronavirus. It's fair for us fiscal conservatives to wonder why the amount in question had to go from the president's initial $2.5 billion request to the final bill's $8.3 billion level. There was, undoubtedly, a ton of waste added in by both parties, but it's good to see that our legislative process can still work, and it seems important that we are using about half the total spent for research and development of both vaccines and treatments.

Besides our political leaders, the other big wild card is the media. Will the media inform the public about what we are facing, or will they set off a panic? There is always an inherent tension in the news business. Factual news coverage does not drive as many online clicks or TV eyeballs as inflammatory, bombastic coverage. Media companies have to work this balance in every story they cover. Given the political dynamic, hyping the crisis and then criticizing the response will likely harm the president, and it's hard to imagine that the press corps will cover this pandemic with any sense of fairness at all. There is nobody the average American journalist has ever loathed more than Donald Trump. The president's approval rating is already tanking, along with the stock market that he regularly sites as a barometer of his success.

The president has argued to date that the damage from this virus is not as bad as the press and others are making it out to be. He has said he "has a hunch" that the death rate may be much lower than the numbers reported. The last thing anyone wants is a president acting on hunches in a time like this. It would be better if the president stopped talking that way, but his broader point is true.

The quick spread of the virus, the rising number of reported infections and the drastic precautions people are taking sure are scary. However, there is still a lot we don't know. The total number of people who have died is still low compared with other causes of death. As of this writing, around 4,300 have died worldwide. Each one is a tragedy, of course, but that is a pretty small number of deaths when compared with other illnesses. The seasonal flu, for example, kills 290,000 to 640,000 people globally per year. Like the coronavirus, the vast majority of those killed by the flu have been either sick or elderly.

The reason people worry more about the coronavirus is the 4,300 people killed are out of a total of only 118,000 confirmed cases. That's a pretty horrific death rate. But what the press fails to explain clearly is that the 118,000 number of reported cases is likely vastly understated. Many people get such a mild strain of the coronavirus that they barely notice it or confuse it with a common cold. We have likely had many multiples more than the 118,000 reported cases so far. This means that the death rate may be significantly lower than the huge 3.4% number reported by the World Health Organization. This was the point Trump was raising. All this is known and discussed by scientists, but people don't understand it because the media doesn't explain it clearly. Failure to communicate this sort of important matter clearly can cause a panic. Sure, that may hurt the president. It already has. But it's also hurting our country.

Neil Patel co-founded The Daily Caller, one of America's fastest-growing online news outlets, which regularly breaks news and distributes it to over 15 million monthly readers. Patel also co-founded The Daily Caller News Foundation, a nonprofit news company that trains journalists, produces fact-checks and conducts longer-term investigative reporting. The Daily Caller News Foundation licenses its content free of charge to over 300 news outlets, reaching potentially hundreds of millions of people per month. To find out more about Neil Patel and read features by other Creators writers and cartoonists, visit the Creators website at www.creators.com.