Airbnb Has Become the Farrakhan of Tech Companies

Mytheos Holt
|
Posted: Nov 27, 2018 10:15 AM
Share   Tweet
The opinions expressed by columnists are their own and do not necessarily represent the views of Townhall.com. 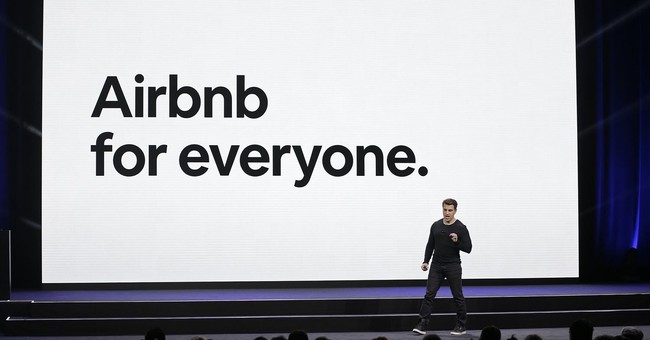 Silicon Valley was radicalized by the election of Donald Trump. It may be a matter of academic interest down the line whether they were already radical beforehand, and just hid it better, or if Trump’s election fundamentally altered their perception of politics. However, practically speaking, the fact of their radicalism post-Trump is not up for debate.

And, indeed, no company has worn their radicalism on their sleeve in this regard moreso than Airbnb. Whereas other left-wing snowflake barons, like the upper management of Google, have been exposed through lawsuits and censorious policy, Airbnb has openly and relentlessly fashioned itself as a public opponent of Trumpism, even in cases where other tech companies have given up the fight. They did this most notably in the case of President Trump’s travel ban, continuing lawsuits against Trump’s ban long after other companies gave up, running ads during the Super Bowl repudiating the ban with the mealy mouthed slogan #WeAccept, and even releasing a statement attacking the Supreme Court when they failed to rule in Airbnb’s favor on the travel ban.

At the same time, the company has been mired in scandal, with the home sharing service being used for everything from drug dealing, to money laundering, to prostitution. No surprise, really, when you consider that until recently, #WeAccept had no limiting principle.

But now, it does, and that principle appears to be the following: no conservatives, and no Jews. The conservative ban was not so subtly instituted when Airbnb banned Breitbart London editor Jack Montgomery from using its service because someone on its Orwellian “Trust and Safety” board found him to be in violation of the company’s ever shifting Terms of Service. Airbnb later reversed the decision, claiming it was in error, but only because Montgomery was able to get enough of a Twitter stink raised that Airbnb had to retract. So really, all they learned was to target less well-connected conservatives.

But that point pales in comparison to the absolutely disgusting move made by Airbnb to recently ban listings in the Israeli West Bank, whether they are legally occupied or not. In effect, Airbnb was siding with radical anti-Israel activists associated with the Boycott, Divestment, Sanctions (BDS) movement that is designed to economically blackmail Israel into giving up land that Palestinians claim a fictitious “right” to. Yet, Airbnb had no problem with this, deciding that it would “remove listings in Israeli settlements in the occupied West Bank that are at the core of the dispute between Israelis and Palestinians."

Again, they did this even to Jewish citizens who owned their homes legally under Israeli law. As a result, Israel is now suing Airbnb, and plans to bring the swift hammer of regulatory justice down on them, and about time, too. To ban Jewish homeowners from their service simply because they live on land that Airbnb’s Left-wing employees personally believe shouldn’t belong to them is repugnant. #WeAccept – unless you’re fighting to keep your house against routine terror attacks and threats, apparently.

There are any number of comparisons that one could make between Airbnb and other shameful opponents of the rights of Jewish people to their own country, and their own sovereignty. Certainly, this decision makes even their communications director’s hilarious mismatch of a photo of lilywhite hipster Airbnb employees dancing on a pier with a caption about imprisoned immigrant children look positively savvy by comparison. But really, when you put the whole picture together, Airbnb increasingly comes out looking like the corporate equivalent reviled by voices on both the Left and the Right: the vile, anti-Semitic racist known as Louis Farrakhan.

And, like Farrakhan, Airbnb’s actions in Israel should be the thing that finally separates it from the Leftist herd and prevents further wagon circling in its favor. Even actress Alyssa Milano was unwilling to be associated with the Women’s March after she realized their close association with Farrakhan. Similarly, even well-meaning #Resistance members should recognize that Airbnb has a pattern of acting as a corporate moral eyesore for their own side. The company should be abruptly and fiercely punished by everyone who regards tacitly siding with enemies of America and her allies as an act of social justice. Airbnb may whine that #WeAccept, but in choosing to not extend that acceptance to Jews, they have revealed their true colors. That is something that no American, of any race, religion, or ethnicity, should be willing to accept.