Mona Charen
|
Posted: Jun 29, 2018 12:01 AM
Share   Tweet
The opinions expressed by columnists are their own and do not necessarily represent the views of Townhall.com. 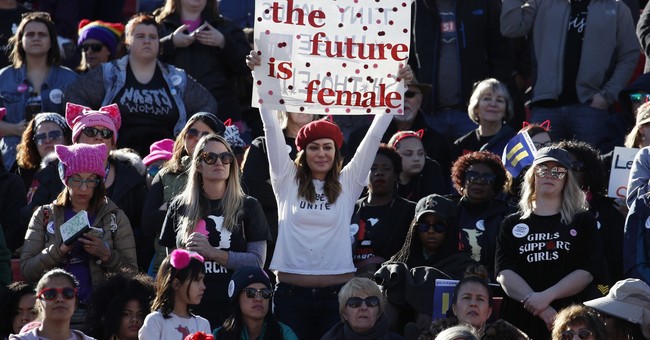 I began writing the book just published this week -- "Sex Matters: How Modern Feminism Lost Touch with Science, Love, and Common Sense" -- in 2014. I'd been thinking about the issues it addresses for decades. Yet yesterday, when an interviewer posed the simple question: "What prompted you to write this book?" I had a Ted Kennedy moment.

In 1979, President Jimmy Carter was reeling from the Iranian hostage crisis and a terrible economy. Sen. Edward Kennedy seemed to have an excellent shot at taking the Democratic nomination away from the incumbent. His campaign debut TV interview, with CBS' Roger Mudd (a descendant, by the way, of Dr. Samuel Mudd, who set John Wilkes Booth's broken leg after he had shot President Lincoln) was staged at the storied Hyannis Port Kennedy compound. Mudd asked: "Why do you want to be president?" And Kennedy had no answer. He stumbled and bumbled and mumbled, but no coherent message emerged.

So, I suppose I failed, too, by not having a pithy response ready. I wish I had said: "Because I'm happy and want more people to be able to say that."

Every year since 1972, the General Social Survey has asked a broad cross section of Americans how happy they are. At the start, women were, on average, happier than men. On every survey since, women's reported happiness has declined. In 1990, the sexes passed one another. Women became less happy than men and less happy than their mothers had been at the same stage of life.

This hedonic decline has coincided with the triumph of feminism. Is feminism itself possibly at fault, at least partially, for this slide in well-being?

Clearly, some of feminism's accomplishments are unmixed blessings -- greater opportunities in the workplace, equal pay and fairer treatment for rape victims among them. Women are dominating education (57 percent of undergraduate degrees), professional level jobs (52 percent) and the helping professions (they comprise 80 percent of veterinary students). Society no longer stigmatizes women who don't marry as spinsters.

But, but, but! Feminists are ideologues who have sought to impose their own preferences on society. They seek an androgynous utopia in which sex differences are, for all intents and purposes, obliterated. As Sheryl Sandberg proclaimed in "Lean In," "A truly equal world would be one where women ran half our countries and companies and men ran half our homes. I believe that this would be a better world." I don't, and it's not because I object to women's running companies or men's running homes. Freedom and choice are glorious things, but I know from my own experience and from the abundant literature about women's preferences, that for most women being with our kids is one of the most joyful and fulfilling aspects of life. Women tend to feel this way more intensely than men (don't take my word for it; the evidence is in the book). So, when we see data showing that women earn less over the course of their lifetimes than men, and feminists insist that this is evidence of a glass ceiling, or lingering discrimination, or a "leaky pipeline," or whatever, I demur. There may be some of that, but the biggest reason for lifetime wage differentials is motherhood.

Like millions of other women, I cut back to part-time work when I had children, and I would not have had it any other way. I'm not judging people who do it differently, but if my husband had said, "I'll do the lion's share of child care; you go out and have a full-time career," I would have balked. Being with my boys -- enjoying the funny things they said, reading to them, listening to them practice their instruments, accompanying them to doctor's appointments (two had special needs) -- was my deepest desire. I've collected all of the columns I wrote during the years my children were growing up and posted them on my website (http://www.monacharen.com). I'm satisfied with many of the columns I've written about culture and politics, but family is where the heart is. Not surprisingly, those columns were also the most popular with readers.

It grieves me that so many women today don't have the same opportunities. Feminism was supposed to expand women's choices, and in some ways it did, but by devaluing marriage, it has left many women -- especially those with less education -- struggling to handle all of the responsibilities of parenthood on their own. I cannot imagine how difficult it would have been to be a single mother. The decline of intact families has also denied millions of men the solidity and maturity that marriage confers, while also denying children the key character traits that dads instill. It's possible to reverse these trends. It doesn't mean "going back" to the Dark Ages. But no spoilers here. It's all in the book!