Mike Fuljenz
|
Posted: Mar 02, 2016 12:01 AM
Share   Tweet
The opinions expressed by columnists are their own and do not necessarily represent the views of Townhall.com. 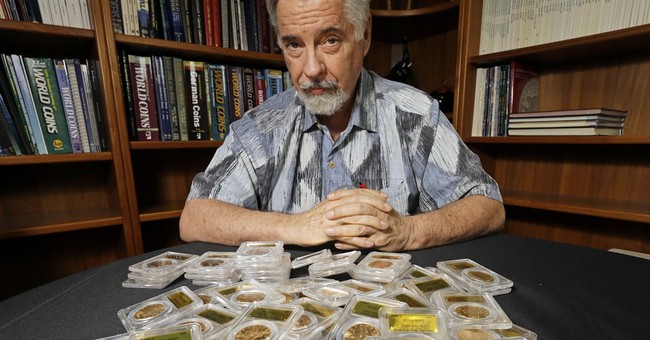 Gold is up 16.9% in the first two months – the largest gain in the first two months since 1980 – while stocks are down over 5%, giving gold a 22% advantage over Dow Jones or S&P 500 stocks through the end of February. Silver held above $15 per ounce all last week in the London daily price settings, but it fell below $15 late Friday in New York. Most of gold’s recent increase came from the belated realization among many investors that the Federal Reserve will NOT raise interest rates any time soon. When rates are near zero in the U.S. and below zero in Japan and most of Europe, then gold becomes more attractive.

Gold just recorded its best performance (since 1980) for January and February. Gold’s four largest increases in those two months came during Presidential election years. In all four of these years, gold increased over 15% in the first two months and also rose for the full year:

Last week, The Wall Street Journal surveyed 118 investment categories so far in 2016, including all of the major currencies, stock markets, stock sectors, bond markets and commodities. The top three and the bottom two investments were all commodities, demonstrating that “not all commodities are made equal.”

The precious metals are up strongly, while gasoline and natural gas performed the worst. In all, 67 investments are down, 49 are up and two are unchanged. Here are the best and worst categories so far:

If you’re wondering why “lean hogs” lead the way, this is mostly a seasonal trend. Pork dominates the butcher shops of America after the holiday season (when budgets are often leaner) and before Easter (when hams are popular), so with Easter coming earlier than usual – March 27 – ham demand is rising!

The other top five investments are perceived as “safe” (utility stocks, for instance), while the worst-performing stock markets are those facing financial or banking problems – like Italy, France, China and Japan.

Yet another mainstream gold analyst has “changed his tune” on gold after its recent rise. The man that Bloomberg called “the world’s top precious metals forecaster” – the Oversea-Chinese Banking Corp. economist Barnabas Gan – said gold could reach $1,400 by the end of this year. He had previously predicted a drop to $950 by the end of 2016, but he revised his estimate upward in late February, due in part to the rising risks in stocks, oil’s decline and some currency devaluations. He now says: “Should risk aversion dominate amid intensified global growth headwinds, gold may well rally to as high as $1,400.”

Analysts at Germany’s Deutsche Bank say that even though gold is relatively expensive now, investors should buy gold as insurance against rising economic risks and market turmoil. According to CNBC on Friday, Deutsche Bank said that “given the plethora of negative deposit rates globally, the holding cost of gold is now negligible in many jurisdictions, and therefore gold deserves to be trading at elevated levels.”

Citigroup has upgraded the SPDR Gold Shares ETF (symbol: GLD), to “overweight.” Last week, they said that they have gone out even longer (in the futures market) in precious metals, while going “underweight” on cash because “gold may replace cash in portfolios” in today’s “negative rate world.”

Because of these upgrades, more and more Wall Street investors are pouring their money into gold ETFs. Holdings in gold-backed exchange-traded products rose to 1,678.6 tons as of Thursday (February 25), the highest gold ETF levels in a year, according to Bloomberg data. SPDR Gold Trust (GLD), the world's largest exchange-traded trust fund, has now grown 18% by shares outstanding since the beginning of the year. In addition, trading in gold call options (bullish bets) on New York’s Comex reached the highest daily average since gold’s peak at $1,900 in September 2011, according to The Wall Street Journal.

Bank of America Merrill Lynch says that precious metals ETFs have seen their biggest three-week inflow of new investor money since 2009. The bank is also using phrases like “gold rush” and “gold is the new black.” Barron’s is also using the term “Gold Rush” in their recent articles, such as “The Global Rush to Gold” by Chris Dieterich” (February 22), saying “Some $2.5 billion has roared into SPDR Gold Shares in 2016, according to XTF.com…. Another $1 billion has gone into the iShares Gold Trust.”