Mike Fuljenz
|
Posted: Jan 13, 2016 12:01 AM
Share   Tweet
The opinions expressed by columnists are their own and do not necessarily represent the views of Townhall.com. 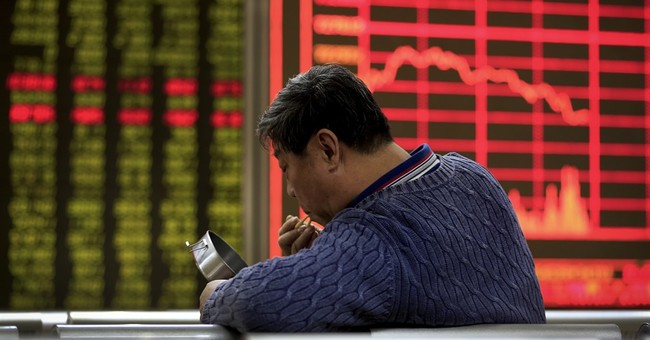 Gold is up 4% in the first week of 2016 while the stock market is down 6%, a 10% swing in one week. As we’ve been saying for several years now, it doesn’t take much to wake up the investment community to the danger of the stock market vs. the long-term security of gold. New crises in the New Year include a panic in the Chinese stock market – causing at least two market closures there – plus new Sunni-Shiite violence erupting in the Middle East, and North Korea testing a hydrogen bomb. In the past few years, these international events have tended to boost gold short-term, but the moves were not sustained for very long. This time around, if we see more such outbreaks more often, this gold recovery may gain traction.

Last Wednesday, two analysts from UBS sent their clients a 39-page report urging them to sell stocks in order to buy gold. In the report, titled “Technical Analysis: Technical Outlook 2016,” Michael Riesner and Marc Müller told clients: “Gold has been trading in a cyclical bear market since 2011. In 2016, we expect gold and gold mines moving into an eight-year cycle bottom as the basis for the next multi-year bull market. Initially, we see gold profiting as a safe haven and as of 2017, gold could profit from the U.S. dollar moving in a major top and starting a bear market.” They expect stocks, as measured by the S&P 500, to reach an annual peak in the second quarter and then fall 20% to 30% late in the year or early 2017. They also expect more volatility – wider swings: “Last year’s rise in volatility was in our view just the beginning for a dramatic rise in cross-asset volatility over the next few years,” the UBS analysts said.

Sturm Ruger stock (symbol: RGR) rose 75.6% in 2015, even though the major stock market averages fell. RGR rose another 1.5% in the first four days of 2016, when stocks were generally collapsing. Smith & Wesson stock (SWHC) did even better, up 132% last year and up another 3% in the first week of 2016. It’s almost like President Obama’s attempt to regulate guns is causing the big gun companies to prosper.

Last Thursday, when President Obama hosted a Town Hall on gun control in Fairfax, Virginia, organized and broadcast by CNN in consultation with the White House, the National Rifle Association (NRA), the premier gun owners’ association in America, was allowed to ask only one pre-screened question. Chris Cox, executive director of the NRA’s Institute for Legislative Action, told Fox News’ Megyn Kelly that his organization declined the invitation because it is contrary to the principles of a free press. He said the limitations amounted to “sitting through a lecture to get one opportunity to ask a pre-screened question.”

The President called out the NRA in the debate, saying, “the NRA is not here. They’re just down the street. This is the reason they exist. You’d think they’d be willing to have a debate with the President.” But he didn’t clarify their “invitation” as one pre-screened question, which hardly constitutes a debate.

Chris Cox told Megyn Kelly of Fox News’ that the president is “trying to create an illusion that he’s doing something to keep people safe... the truth is his policies have failed miserably.” This President “doesn’t support the individual right to own a firearm. That’s been the position of his Supreme Court nominees. That’s been the position of his administration, so what are we going to talk about, basketball?”

Instead of censoring the NRA, why not hold a “summit” with representatives from pediatric, psychiatric and medical associations, government, law enforcement, the NRA and the movie and video game industry, so that all sides can work together with equal say? If everyone has “skin in the game,” there is a better chance of a meaningful compromise. I believe the NRA would participate in such a summit.

Our home-team Houston was shut out in the first NFL wild-card playoff game last weekend. In fact, all four visiting teams (the “Wild Cards”) beat the four home-team divisional champions over the weekend, with one lucky winner (Seattle beating Minnesota due to a muffed field-gold attempt) and one win due to penalties for bad behavior by the Bengals. Cincinnati linebacker Vontaze Burfect hit the head of all-pro Pittsburgh receiver Antonio Brown so hard that he crumpled like a broken rag doll with a hit which could have been lethal. He cost the Bengals a playoff victory and deserves a suspension for part of next season.

Burfect has caused an NFL-high 14 “unnecessary roughness” penalties since 2012, including three against the Pittsburgh Steelers in a regular season game in early December. With the recent release of the movie, “Concussion,” the dangers of aiming at the head of one’s opponents is now widely known, so the NFL needs to get serious about protecting its players by suspending those who seek to injure other players.

In all the furor over China’s collapsing stock market, the press is ignoring China’s still-ravenous gold demand. The untold story in the mainstream media is that China is using the world’s fattest piggy bank of foreign exchange (that’s foreign currency plus gold) of nearly $4 trillion (at its peak in 2014) to try to rescue its failing stock and real estate markets. But China is still finding time to buy gold in the process.

By the end of 2015, China’s foreign exchange dropped from $3.993 trillion in 2014 to $3.330 trillion, an emergency drawdown in their piggy bank of about $663 billion dollars. This erosion of foreign exchange accelerated rapidly in the last month of the year, dropping over $100 billion in December alone. But at the same time, Beijing was adding gold to its central bank coffers. In December alone, the People’s Bank of China bought another 19 metric tons of gold, bringing its total gold holdings up to 1,762.3 metric tons, worth $62 billion at today’s prices. (A metric ton is one million grams of gold, or 32,150 Troy ounces)

China’s overall gold demand, including consumer and industrial demand (plus official gold purchases), reached 2,600 metric tons in 2015, the equivalent of about 85% of all new gold mine production last year. Starting in 2016, gold imported into China for industrial use will not require a central bank permit. (By definition, industrial use includes decorative work, like gold in watches, or for the minting of gold coins.)