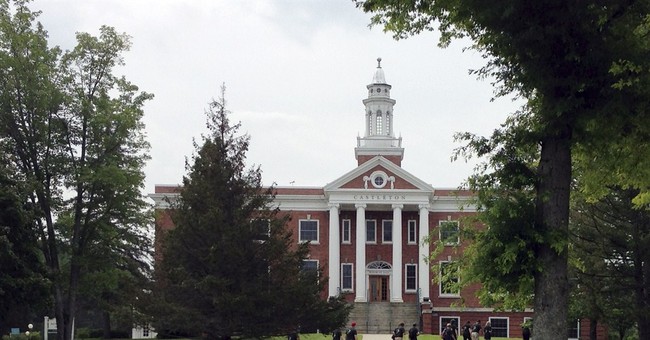 Every now and then I have to apologize for going a little bit over the top. Recently, I did that when I suggested we should eliminate all university majors ending with the word “studies.” Obviously, that’s a little extreme. So I apologize. Instead, I am going to suggest that we eliminate some of the “studies” majors and just rename the rest. I write today to suggest that the first one we should rename is Women’s Studies. From now on, I propose that we call it “Hysterical Women’s Studies.” My reasons for the immodest proposal are based on direct and indirect experience with so-called scholars in Women’s Studies and with their students.

Around the time I started writing about the suspect nature of Women’s Studies I learned of a director of a university Women’s Center named Sally Jacobsen. She became so hysterical when she saw a pro-life display that she actually exploded in anger, physically destroyed the display, and stole the Christian crosses, which she had just broken.

*A lesbian women’s studies professor (please pardon the redundancy) falsely accused a professor of violating Title IX because he refused to tell the dean the name of a student who had been previously raped while off campus. Instead, he told the local D.A. In other words, he insisted on diverting the case to the real court system and away from the campus judiciary. Predictably, the lesbian professor went hysterical.

*The Women’s Studies Student Association was asked by Ratio Christi to attend a pro-life event. They responded by going hysterical and threatening them with prosecution in the campus judiciary simply for inviting them to dialogue. If these women cannot find employment after college they would make really good car alarms. If you get anywhere near them they start to make loud irritating noises, otherwise known as harassment complaints.

*In the spring, these brilliant women’s studies students decided to form a human chain around a pro-life display in order to keep pro lifers from passing out literature on abortion. After the police were called to keep them behind a barricade a pro-life professor referred to them as caged animals. Predictably, some went hysterical and made harassment charges against the professor. It’s just what they are programmed to do. Or maybe they were born with the hysterical gene.

*After the Dean dismissed the student harassment complaints, the angry feminists went on the previously mentioned pro-life professor’s Facebook page in an effort to get re-offended and “harassed.” Having failed in their efforts to file a formal complaint, they went to the media and complained that they felt “unsafe” on campus as a result of his off campus Facebook posts. The on-camera interview did not go so well and caused viewers to ridicule them for being hysterical. So they became frustrated and even more hysterical.

*Next, the hysterical feminists resurrected the aforementioned lesbian women’s studies professor’s false accusation that the professor had violated Title IX (simply because he reported a rape to a D.A. instead of a Dean). In the new and even more hysterical version of the story, the professor did not report the rape to the D.A. He suppressed it altogether. This paved the way for more hysteria.

*Bringing things to an emotional climax, the unhinged feminist launched an Internet jihad by starting a petition accusing the “pro rape” professor of having the university LGBT director fired for her sexual orientation and political beliefs. This was just a few weeks after the LGBT director publicly boasted that she had run a pro-life group off campus for sharing their political beliefs. I guess the “B” really does stand for having it both ways. Maybe it stands for “bipolar.”

*This petition caused the feminist hysteria to be supplemented by homosexual hysteria. In the midst of the hysteria, these students sent profane messages to the professor, attempted to hack his email account, bombarded his Rate My Professor page with fake reviews, and topped it off by sending homosexual pornography to his workplace, which actually is sexual harassment. Once again, love wins!

*When the now-former LGBT director later issued a statement saying she voluntarily resigned and was not fired for her sexual orientation or her political beliefs, the petition was finally shut down. Unfortunately, 3,000 people were tricked into signing it based on false and defamatory information.

*After being embarrassed for joining an Internet jihad without reason the hysterical feminists were naturally embarrassed. So they took their hysteria to the chancellor’s office where they had a sit-in and demanded to see the university’s highest-ranking officer. Predictably, the cowardly Chancellor Bill Sederburg let them into his office. I suppose hysteria wins. Better hashtag that one, too.

While all of this was going on at my school, there was even greater hysteria exhibited by Dr. Mireille Miller-Young, a feminist studies professor at the University of California – Santa Barbara (UCSB). She actually became so hysterical when someone disagreed with her on the abortion issue that she physically attacked a sixteen-year-old pro-lifer handing out anti-abortion literature on her campus.

After physically attacking the minor, the hysterical professor told police she had a “moral right” to do so. But when the case went to trial, the jury convicted her of theft for stealing the teenager’s anti-abortion sign (and also battery for attacking her). Ok, I guess sometimes hysteria loses.

To make matters worse, 12 professors sent letters to the judge vouching for her character and describing her as “open-minded.” One lauded her “kindness combined with her commitment to justice.”

No one in the administration ever apologized to the public for Miller-Young’s hysterical and literal assault on free speech. Vice Chancellor for Student Affairs Michael D. Young even sent a letter to students noting, “During the last few weeks, UCSB has been visited by various anti-abortion crusaders.” He even called the assault victim a “provocateur.”

In other words, the minor deserved to be attacked by the professor. She started it.

Small wonder that there is such a pathetic environment for free speech on our college campuses. This kind of feminist hysteria is no longer simply tolerated. It is actually encouraged in the inverted moral universe of hire education (Note that the occasional ms-spelling of words is intentional).

Hard working taxpayers should not be asked to fund so-called academic programs that take confused young women and turn them into hysterical zealots who divide their time between killing unborn children and killing free expression. But there is little chance that academia will come to its senses and abandon illegitimate academic pursuits.

The least we can hope for is to put the word “Hysterical” before “Women’s Studies” on their degrees and college transcripts. It would serve as a warning for future employers who would prefer to keep hysterical bigotry masked as feminism out of their workplace.