Donald Trump Did Not Die for My Sins

Michael Brown
|
Posted: Jan 28, 2018 12:01 AM
Share   Tweet
The opinions expressed by columnists are their own and do not necessarily represent the views of Townhall.com. 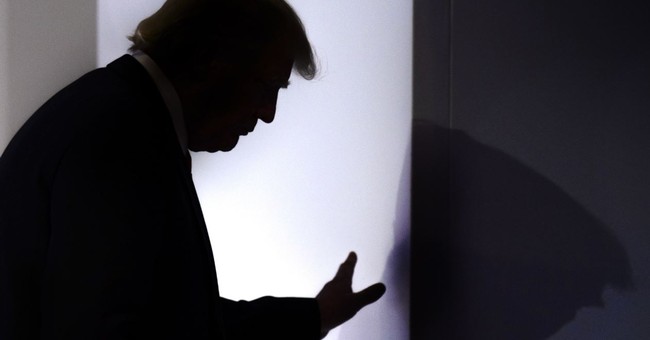 I was scheduled to be on CNN this week to debate another commentator about evangelicals and President Trump, but due to breaking news, the debate was cancelled. Had I been on the air, I planned to make this point: With all respect to our president, and with my appreciation for the good things he has done, he did not die for my sins, and I have not staked my soul’s salvation on his reputation. That distinction belongs to Jesus the Messiah, and to Jesus alone.

Why the need to state something that is so totally self-evident?

Unfortunately, in large part due to the media’s anti-Trump frenzy, if you dared to vote for Trump, let alone speak a positive word of support on his behalf, you are considered complicit in his every failing, be it an adulterous affair in his past or an inappropriate tweet in the present. Wherever Trump is guilty (or perceived to be guilty), you are guilty. And if you dared endorse him, you have committed the unpardonable sin.

One of my ministry school grads was having a conversation with a stranger while they waited in line at an event. The conversation turned spiritual, and my former student began to share his faith. The stranger asked him, “Did you vote for Trump?” When he said yes, the man refused to talk anymore. Jesus was not the issue; Trump was.

A Christian woman told me that a close family member is no longer open to hear about Jesus because she voted for Trump. The conduct and character of this Christian woman no longer matter. The message of redemption through the cross does not matter. All that matters is that this family member perceives Trump to be a dangerous buffoon, and anyone who voted for him cannot be taken seriously.

May I suggest that, at least in part, this is a demonic attempt to turn people away from the Lord? May I suggest that our message has never been tethered to a politician? May I suggest that we fight against this aggressively, not by defending Trump but rather by asking more basic questions, such as: “If you were starving and I offered you free, healthy food, would you ask if I voted for Trump before you accepted it? If you were drowning and I reached out my hand to save you, would you choose to drown if you knew that I had voted for Trump?”

The point is that the gospel message states that people are perishing without Jesus, but through Him we can freely offer salvation. This is good news regardless of who we voted for. It saves the lost whether we who bring the message are Republicans or Democrats. We must proclaim this without fear and shame.

I’m quite aware of that objection, and that’s why I used the examples I did.

The issue here is one of eternal life and death, of salvation or damnation, which means it’s even more pressing than the issue of starving or drowning. If you are guilty in God’s sight and worthy of His judgment, and we have a message of eternal forgiveness and pardon, does it really matter who we voted for?

I agree that some evangelicals have so visibly hitched themselves to Trump and/or the Republican Party that we have compromised our integrity, as if political power was of greater importance to us than serving a lost and hurting world. We alone are to blame for this, and we alone can fix this. I do not minimize this for a moment.

At the same time, the very liberals who thrash us daily for our political affiliation as followers of Jesus had no problem with Christian support of Barack Obama and Hillary Clinton, despite their support of the slaughter of the unborn and despite their largely ignoring the Christians genocide in the Middle East. Why no shrill cries of hypocrisy? Why no protest marches in the streets? Why no one saying, “If you voted for Obama (or Hillary), I won’t listen to your gospel message?”

For me, the solution is simple. When asked how I voted, I’m happy to say, “I voted for Donald Trump, but I did so with hope mixed with reservation. That’s why, on some days I’m tremendously proud of him while on other days, I cringe. But given the choice of Hillary or Trump, I’m glad I voted for him. At the same time, I find no need to defend him when he falls short, nor am I presenting him as a model Christian. That’s also why I pray for him.”

If I’m dealing with an honest, thinking human being, I don’t see how it can be viewed as a hindrance to the gospel. That’s why I’m not going to accept my vote for Trump as a conversation ender. I’ll do my best to turn it into a conversation starter, one that quickly turns from our president to our Savior. He’s the only one I want to proclaim.