Will God Bless Trump for Moving Our Embassy to Jerusalem?

Michael Brown
|
Posted: Dec 07, 2017 12:01 AM
Share   Tweet
The opinions expressed by columnists are their own and do not necessarily represent the views of Townhall.com. 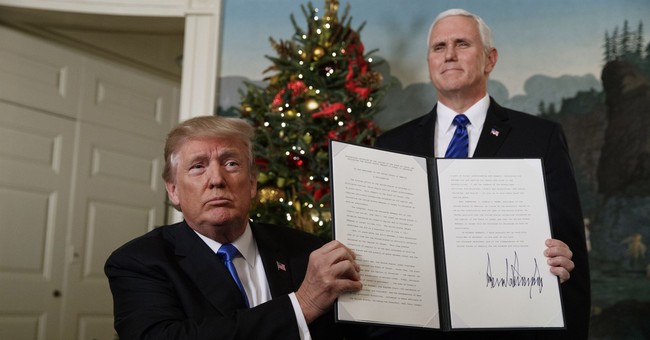 Ben Shapiro listed 7 reasons why Trump’s decision to move our embassy to Jerusalem is right, calling it “an act of not only political bravery but moral courage.” But is it an act that God Himself will bless? Is there spiritual significance to this decision as well?

Earlier this year, a pastor asked me if there was any way to get a message to the president. With great passion, he said to me, “During the campaign, Donald Trump promised to move the embassy his first day in office, but he didn’t do it. And when did the protest marches against him begin? His second day in office! He will never see the full blessing of God until he makes good on his promise.”

Others believe that Trump’s decision will prove disastrous. As a headline on the Daily Mail proclaims, “'He's declaring war on 1.5 billion Muslims': Trump will recognise Jerusalem as Israel's capital TODAY despite international fury from the Pope, Britain, Russia, China and Palestinians.” In the words of the Palestinian Authority’s Manuel Hassassian, “He is declaring war in the Middle East, he is declaring war against 1.5 billion Muslims [and] hundreds of millions of Christians that are not going to accept the holy shrines to be totally under the hegemony of Israel.”

In reality, Trump is not declaring war in the Middle East, not declaring war against 1.5 billion Muslims, and in no way, shape, size or form declaring war on hundreds of millions of Christians. In fact, the very notion that Christians will not accept “the holy shrines” being “totally under the hegemony of Israel” is absolute nonsense.

First, America’s recognition of Jerusalem as Israel’s capital changes nothing on the ground at all, especially when it comes to the Christian holy sites, which have been under Israeli hegemony for decades. Second, it is under Jewish hegemony that Middle Eastern Christians have access to these holy sites and freedom to practice their faith. The restrictions generally come under Islamic, not Israeli rule.

Still, the question must be asked: Why the uproar over Jerusalem? Why does the whole world care? Why does the Pope weigh in? Why are Muslim nations in such upheaval? Why are Russia and China concerned? What makes Jerusalem so important?

Jerusalem was never the capital of a Palestinian or Arab state (for that matter, there was not even a concept of a Palestinian state until the middle of the 20th century and no such thing as a Palestinian people until after the Six Day War in 1967).

Every other nation on the planet chooses its capital city and the other nations recognize that city and put their embassies there. Why won’t the rest of the world recognize Jerusalem as Israel’s capital? Why are the embassies located in Tel Aviv rather than Jerusalem?

Jerusalem is the historic capital of the Jewish people, going back to roughly 1,000 BC. Jews face Jerusalem when they pray and synagogues in the West face East, while every year at Passover, the hopeful prayer is recited, “Next year in Jerusalem!” And in terms of functional reality, Jerusalem is the capital of the nation. There’s nothing to discuss or debate. That’s reality, plain and simple.

When it comes to the peace process, more than two decades of negotiations have yielded precious little progress, so the idea that recognizing Jerusalem would hurt this process is ludicrous. Instead, if the Palestinians want peace with Israel, they can have wonderful, lasting, prosperous peace – without dividing Jerusalem.

But all these are political questions and issues. My question is spiritual in nature: Will God bless President Trump and the United States for making this bold and courageous move?

I believe He will, since: 1) in doing so the president is blessing Israel, and God still blesses those who bless His covenant nation, despite that nations sins; 2) out of all the cities on the earth, the Bible only calls us to pray for the welfare of Jerusalem (see Psalm 122; Isaiah 62:1-8); 3) the tremendous resistance to the president’s decision gives evidence to the intensity of the spiritual battle over this city; and 4) there are prophetic scriptures that speak of a Jewish Jerusalem welcoming back the Messiah, and so the decision to fortify the unity of the city is in explicit harmony with those Scriptures (see especially Zechariah 12 and 14).

And what about God’s love for the Muslim world? What about justice for the Palestinians?

The answer is simple: If they want to be blessed, they too must recognize the Jewish claim to Jerusalem, a city that they do not need to possess or divide. They don’t need to call for violence and war. Instead, they need to accept that East Jerusalem will not be the capital of a Palestinian state, that working with the Jewish people rather than against them will be in their best interests too, and that the Jewish people have a massively greater claim to Jerusalem than the Muslims do.

As for President Trump, he is convinced that this formal recognition of Jerusalem will aid and abet the peace process. But even if that is not the case, I truly believe that God will bless him and bless America for making this courageous and righteous decision.

Let’s watch and see in the coming days.