Michael Barone
|
Posted: Apr 08, 2016 12:01 AM
Share   Tweet
The opinions expressed by columnists are their own and do not necessarily represent the views of Townhall.com. 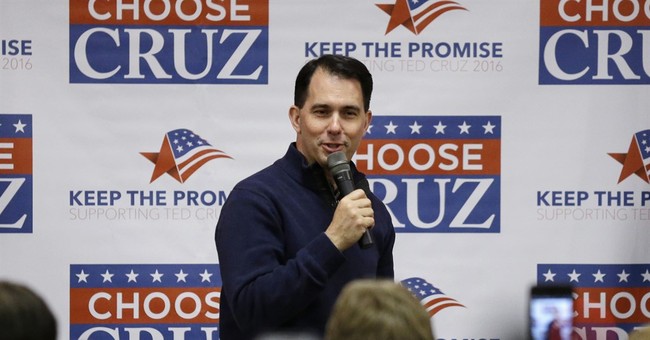 Trending
"Donald J. Trump withstood the onslaught of the establishment yet again." That's the first sentence in a Trump campaign statement tweeted out Tuesday night by the Washington Post's Robert Costa. It's also a strange way to respond to a solid defeat, reminiscent of the Monty Python knight who insists he is winning after both his arms are hacked off.

In the three weeks since March 15, Trump has made little progress in his drive to win the 1,237-delegate majority necessary for the Republican nomination. The Washington Examiner delegate count shows Trump with 743, some 494 delegates shy of 1,237. He needs to win about two-thirds of remaining delegates to get a majority.

The race in Wisconsin shows why that seems increasingly unlikely. One reason is that Trump speaks conservatism as a second language he hasn't bothered to master.

Hence his offhand remark that women who have abortions should be punished -- something advocated by no one on any side of the issue. Hence his blistering attacks on Wisconsin Gov. Scott Walker, whose policies have been supported well nigh universally by Wisconsin Republicans.

In contrast, Ted Cruz showed an ability to adapt to terrain and vary his approach from his usual college-debater style. Appearing with his wife, mother and supporter Carly Fiorina, he spoke of the achievements and tragedies of women in his life. He has learned to leaven his crisp issue stands with an emollient tone reminiscent of Marco Rubio.

Cruz seems unlikely to overcome Trump's lead in New York, where the relatively few registered Republicans seem to lack the social connectedness that helped him pile up huge majorities in the Milwaukee suburbs. But he has demonstrated that his appeal is no longer limited to evangelicals. He may lose to Trump in the Northeast but block him from amassing 1,237 delegates in contests elsewhere.

John Kasich's weak Wisconsin showing may reduce his numbers elsewhere. Or it may indicate that Wisconsin voters wanting to stop Trump were tactically voting for Cruz -- and that anti-Trump voters in affluent Northeastern districts where Kasich outpolls Cruz may flock to Kasich.

Either way makes it harder for Trump to get to 1,237. And even if Kasich and Cruz split the anti-Trump vote in Pennsylvania, that would get him only 17 statewide delegates; the state's other 54 delegates elected by congressional district will be uncommitted.

The Trump campaign's Tuesday night tweet accused Cruz of being a "Trojan horse, being used by the party bosses attempting to steal the nomination from Mr. Trump." The assumption is that the candidate who wins a plurality of delegates is entitled to the nomination even if he falls short of a majority.

Nonsense. The majority requirement is not arbitrary, as Trump has suggested, but a rational means of preventing the nomination of a candidate opposed by a majority of the party. Trump, who has won 37 percent of primary and caucus votes and 31 percent of delegates so far, is such a candidate. His high negatives and poll deficits against Hillary Clinton give Republicans reason to fear disaster if he is nominated.

Democrats have a similar majority rule and for a century, from 1836 to 1932, required a two-thirds supermajority for the nomination, to allow any large faction -- Southern segregationists, big city machine bosses -- a veto over the nomination. The parties' current majority requirements are modest in comparison.

In recent years candidates with plurality wins like Trump's have gained added support because they were widely acceptable. Trump isn't widely acceptable, and he hasn't gained added support. His 35 percent in Wisconsin against two rivals is just slightly above his poll numbers there and is identical to the 35 percent he got in New Hampshire against a dozen opponents in February.

One final note on Wisconsin: Republican turnout was higher than Democratic -- 1.1 million versus 1.0 million. Democratic turnout was not depressed by lack of suspense: Bernie Sanders won with 57 percent, and there was a hotly contested partisan race for state Supreme Court.

Republican turnout also exceeded Democratic in six other general election target states this year. That's a vivid contrast with 2008 and a mildly positive harbinger for Republicans -- if they manage to nominate a candidate without Trump's huge negatives.