American Exceptionalism: How Has It Fared in the Obama Years?

Michael Barone
|
Posted: Jan 15, 2016 12:01 AM
Share   Tweet
The opinions expressed by columnists are their own and do not necessarily represent the views of Townhall.com. 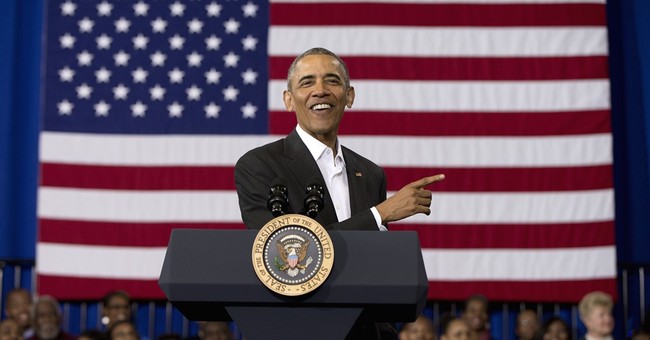 Trending
In his final State of the Union speech Barack Obama made at least a few bows toward the idea that America is an exceptional nation, an idea he once derided by saying, "I believe in American exceptionalism, just as I suspect that the Brits believe in British exceptionalism and the Greeks" -- this was before their fiscal crisis -- "believe in Greek exceptionalism." We remain exceptional, he said in Tuesday's speech, as the world's strongest nation militarily and because we're doing better economically than most other large nations.

But overall, has America become less exceptional in the seven years of the Obama presidency? Yale law professor Peter Schuck addresses that question in National Affairs, using as a benchmark "Understanding America," a 2008 book he co-edited with the late political scientist James Q. Wilson.

America, Schuck summarized, is "unique on a whole host of fronts" because it's "decentralized, diverse, competitive, contentious." These factors have contributed, to varying extents, to the astonishing success of a republic that started off with 3.9 million people in 1789 and has 321 million today.

One way we are exceptional is that we have a Constitution that divides power among executive, legislative and judicial branches. Obama has gathered more power in the executive: passing Obamacare by legislative legerdemain, shutting down the coal industry by dubious regulations, attempting to legalize illegal immigrants by executive order, though the most recent attempt has been ruled illegal by federal courts. This trend toward prime ministerial government didn't start in 2009. But Obama has extended it further than ever before.

In other ways Obama has not changed what is unfortunate about American politics. We tend to have relatively low voter turnout, and it's declined during the Obama years. And American politics and government remains relatively decentralized, with different states going their own ways.

Although Obama was re-elected with 51 percent of the vote, most Americans have Republican governors and state legislatures. Most rejected what parts of Obamacare they could and, even as Obama touts gun control, every state now allows law-abiding citizens permits to carry concealed weapons.

On this score critics have grounds for saying Obama administration policies have made the nation less exceptional -- and less productive. Certainly American financial regulation proved less sound than thought shortly after Friedman wrote, but it's not clear that Obama's Dodd-Frank Act improved it.

Big banks' market share has increased; bank loaning has not entirely rebounded. Entrepreneurship and new business formation this century has been lagging previous levels, an acceleration of a pre-Obama trend.

Friedman noted also that Americans tend to work more than people in other advanced countries. But our distinctiveness there has declined since 2009. American work-force participation -- the percentage of adults holding or seeking jobs -- remains at the lowest levels since the 1970s, even after several years of 2 percent economic growth. Disability rolls have skyrocketed, and young people have gotten a slower start on their working lives than in past generations.

Schuck notes, accurately, that American social mobility -- the percentage that move from lower to upper economic classes -- has for many years not been exceptionally high, as many Americans have assumed. But many Americans think it's declining today. Overall, the case for the exceptionalism of the American economy seems increasingly to be based more on the weakness of other nations' economies than on the strength of our own.

What about American diversity? Immigration continues, though at reduced levels as compared to the 1982-2007 period, and immigration from Mexico, our largest source of immigrants then, has tailed off to zero since the financial crisis of 2008.

But despite Islamist terrorist attacks and despite Obama's warnings against anti-Muslim prejudice in the State of the Union, there is little sign of anti-immigrant violence. What has changed is public acquiescence in legalizing illegal immigrants -- perhaps a response to Obama's arguably illegal attempts to do so.

Which leads to American contentiousness, one aspect in which even Barack Obama seems to concede America has become more pronounced during his presidency. Mainly because many Americans, operating through our decentralized politics and government, have been resisting his "fundamental transformation" attempts to make America less exceptional.