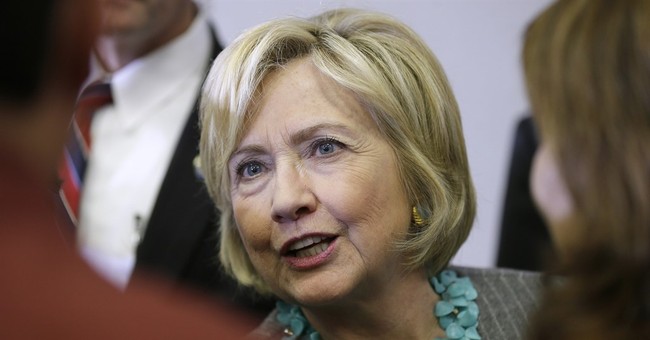 On Sept. 14, 2012, three days after the murder of Ambassador Christopher Stevens, Sean Smith, Glen Doherty and Tyrone Woods in Benghazi, Libya, Hillary Clinton appeared at Andrews air force base, where she spoke with family members of those slain.

Shortly afterward, Tyrone Woods' father reported that she told him, "We are going to have the filmmaker arrested who was responsible for the death of your son." Sean Smith's mother recently repeated this, saying, "She said it was because of the video." Glen Doherty's sister said she chose "in that moment to basically perpetuate what she knew was untrue."

In public remarks Clinton said, "We've seen rage and violence directed at American embassies over an awful Internet video that we had nothing to do with." Those words and her assurances to the family members stand in stark contradiction to what Clinton said in messages she sent over her private email system at the time.

On Sept. 11, 2012, she told her daughter that the "officers were killed in Benghazi by an al Qaeda-like group." On the morning of Sept. 12 she told an Egyptian diplomat, "We know the attack in Libya had nothing to do with the film. It was a planned attack -- not a protest."

Blaming the Benghazi murders on spontaneous protest of an anti-Muslim video (whose maker was indeed arrested, on unrelated charges) was apparently part of an Obama administration strategy. On Sept. 15, Susan Rice, then ambassador to the United Nations, after White House briefing went on five Sunday interview programs and blamed the attacks on the video.

There was an obvious political motive for blaming the video. Early September polling showed the race between Obama and Mitt Romney tied. Obama was claiming success against terrorists, frequently citing the death of Osama bin Laden as evidence that the threat was reduced.

The Benghazi attack -- the first murder of an American ambassador in 33 years -- obviously cast doubt on those claims. It validated criticism of the administration's "leading from behind" in Libya policy.

Yet now Clinton says the victims' family members are mistaken and that she didn't mention the video to them at all. On ABC News' "This Week" last Sunday George Stephanopoulos, a former Clinton White House aide, asked the candidate, "Did you tell them it was about the film?"

She went on to say she understood "the continuing grief at the loss that parents experienced," thus suggesting that they are unreliable witnesses. She cited her testimony before the Benghazi committee three years later, as if that is relevant. She talked about "a fast-moving series of events in the fog of war."

To believe that Clinton's "no" is not a lie, you have to believe that multiple individuals each misremembered what the U.S. secretary of state had said to them. Or that members of three different families, struck by tragedy, got together and conspired to invent and spread an identical story that would someday embarrass her. Or that this is somehow the result of a vast right-wing conspiracy.

Journalists, if they are more interested in determining the truth than in making sure Clinton is elected president, should ask her if she believes any of these things.

There's another area where journalists ought to be pressing Clinton for answers. On Dec. 3 a New Hampshire voter -- not a journalist -- asked her, "You say that all rape victims should be believed. But would you say that Juanita Broaddrick, Kathleen Willey and Paula Jones be believed as well?" All three in the 1990s accused Bill Clinton of acts that constitute sexual assault or harassment.

"Well," replied Hillary Clinton, "I would say that everyone should be believed at first until they are disbelieved based on evidence."

The obvious follow-up is: What evidence? Anything beyond Bill Clinton's denials? Even after he had to retract his denials of sex with Monica Lewinsky and chose to settle a lawsuit brought by Paula Jones?

Some may argue that these are peripheral matters. But the video-made-them-do-it distraction was clearly designed to help secure the re-election of President Obama. The purpose of Hillary Clinton's decision to stand by her husband and denigrate those making charges against him was clearly to keep him in the White House.

Hillary Clinton has not answered all the legitimate questions that can be asked about these matters. Legitimate journalists should keep asking them until she does.