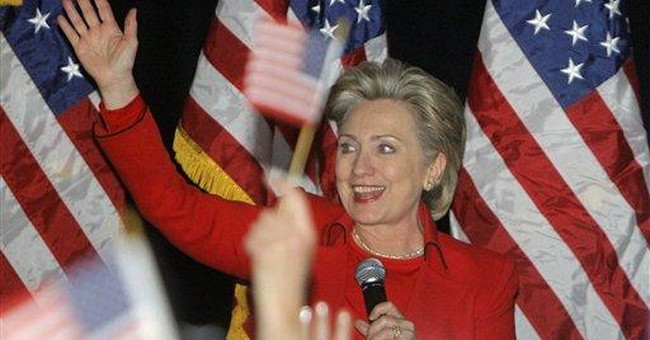 Optimism. It's not a uniquely American quality, but it's a very American quality. And, for those who would be the president of the United States, it's a quality they can't afford to ignore.

Candidates must walk an unenviable line. They must sound a bit irascible without sounding impotent. Want change without trashing the country, address problems without being pessimistic, and deploy negative advertising without being perceived as nattering nabobs.

It's tough, which might explain why some candidates have taken to defining optimism down instead of living up to its sunny expectations.

When I was in New Hampshire the day before primaries, I attended a Hillary rally at which I was pleased to hear her talk about the accomplishments of America, past, present and future. It only took a moment to realize, however, that the "can-do attitude" she was talking about had nothing to do with the capabilities of individual Americans.

"It has paralyzed us," she said of the "politics of fear," engendered entirely by Bush and not by the world's 19 most notorious, murderous hijackers. "It has made us believe we can't solve our problems…Since when did America become the can't-do country? We roll up our sleeves and fix things…We have to know that anything is possible in America."

Hillary explained that President Bush had crushed the can-do spirit of America and the only thing that could bring it back, presumably, was the singular ability of the Clintons to propose giant government programs to do things for them. Are you following? Neither am I.

Which is why I was saddened to hear a similar message coming out of Mitt Romney's win in the Michigan primary.

"Tonight marks the beginning of a comeback, a comeback for America," Romney said to supporters in Michigan. "Tonight is a victory of optimism over Washington-style pessimism."

Hey, I'm all for optimism, but the difference in McCain's and Romney's messages in Michigan seemed to be more about giant checks from the federal government than good cheer and competence.

McCain, with his characteristic and often tin-eared "straight talk," told Michigan voters the old jobs weren't coming back, but that fiscally responsible government and lower tax rates could make Michigan and the whole U.S. a place hospitable for new business in a global economy.

Romney promised a surge from $4 billion to $20 billion in federal spending on energy research, which he said was not a "bailout, but a workout," as the center of his plan, embellished with some regulatory scale-backs on fuel efficiency standards.

Though Romney's plan arguably could have an effect on the national security issue of energy independence and industries beyond the auto industry, as he argued on Fox News Sunday, the idea that government-funded research is the key to keeping automotive jobs is belied by the economy of another early primary state in economic transition—South Carolina, which McCain won despite sticking to the assertion that "people know those textile jobs aren't coming back" and promises of "tough times ahead."

The truth is that South Carolina's textile industry has been replaced, in part, by its own automotive boom thanks not to government investment, but mostly to the non-unionized, skilled workforce of the South coupled with good quality of life, and population growth, all of which are fueled by lower tax rates and less oppressive regulations than Michigan boasts.

As a result, South Carolina has seen foreign motor companies take root, like BMW in Greer, S.C., Honda ATV in Florence, and a proposed Volkswagen plant under consideration in Anderson. Mercedes has added a plant in Alabama, Toyota in Kentucky and Mississippi, and Nissan in Tennessee, all in the last decade. Many of those plants are increasing production, employing workers, stimulating local economies, and raising their fuel standards without a $20 billion hand from the government.

South Carolina's relative resilience has led the state's voters to respond to the true optimism of the free market and free trade. They sent Sen. Jim DeMint to Washington in 2004 over a protectionist Democrat and protectionist Republican primary opponent, former Gov. David Beasley, who was campaigning last week for another economic populist who found himself on the losing end of the Sandlapper electorate—Mike Huckabee.

Huckabee, who was unable to gain ground with non-evangelical voters in South Carolina, has said that Americans are looking for a candidate who can speak to them about economic troubles—"a candidate who looks like the guy they work with instead of the guy who laid them off."

He's right, to a point. Conservatives and Republicans do need to learn to speak about the strength of our economy and the resilience of the market in a way that doesn't discount the troubles of voters in a flurry of supply-side statistics and "suck it up."

But selling government-funded snake oil as a remedy is the Democrats' job. As the election moves forward, the economy wobbles in uncertainty, and voters make it their No. 1 issue, it's good to see that Romney's, McCain's, Huckabee's, and Rudy's economic stimulus proposals all contain significant permanent tax relief that would incentivize investment and risk-taking.

Long-term tax relief—perhaps making the Bush tax cuts permanent, as Rep. Jeb Hensarling, President of the conservative Republican Study Committee suggests—will keep worried businesses from scaling back in anticipation of the expiration of those cuts in 2011. Bush's 2001 tax rebates were not unhelpful to individual Americans, but it was tax rate cuts that stimulated the economy and changed behavior.

As we move forward, let's hope all Republicans—both those running for the White House and the one already in it—can remember that the greatest optimist to occupy that particular residence in the last 50 years did not declare America a "subsidized city upon a hill" or a the "last, best government-funded hope of man on Earth."

Optimism is not a uniquely American quality, but it is a very American quality, and Reagan knew a government program was a poor substitute for it. We forget that at our peril, and we're going to need all the clarity we can muster on our own side to protect against the ideas of the other:

"…We have systematically diminished the role and the responsibility of our government, and we have watched our market become imbalanced…I want to get back to the appropriate balance of power between government and the market." -- Hillary Clinton, January 2008