This Is What Real Change Was Always Going To Look Like

Mark Davis
|
Posted: Jan 20, 2017 12:01 AM
Share   Tweet
The opinions expressed by columnists are their own and do not necessarily represent the views of Townhall.com. 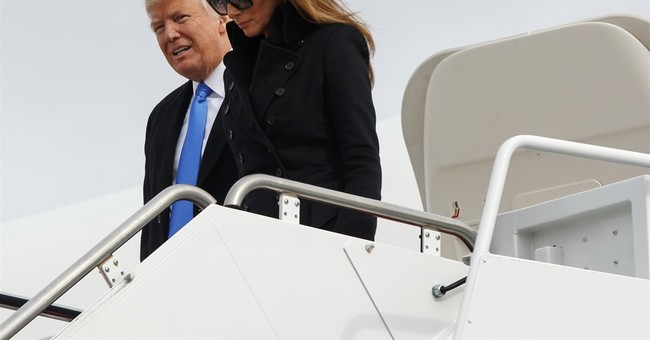 As Donald Trump takes the oath of office today as our 45th President, there is a broad spectrum of odd reactions, a far different scene than if any of his Republican rivals had prevailed.

Oh, we would still have the media attacks, the insulting hectoring of Cabinet appointees, the general revulsion from big names in the popular culture. But there has been something different all along during the ascendancy of Donald Trump. It has elicited a special level of enthusiasm from some and a special level of annoyance from others.

No other GOP President-elect would have drawn this level of slander from Democrats, nor this kind of neurotic convulsions from some Republicans. It might have been close. Liberals would have had a conniption fit if Ted Cruz had won; conservatives would be wringing their hands if Jeb Bush had succeeded.

But as Trump takes office, his opponents on the left are screeching with a viciousness that is excessive even for them. On the right, skeptics jarred by the audacity of his victory are struggling with their perceptual disorders. Some have come to terms with why they were so wrong, others never will.

The reason so many were so wrong about Trump’s chances is that they saw this election through the lens of the familiar; they expected that even with its large and unprecedented cast of characters, 2016 would play out according to the usual rules, the usual behavioral standards, the usual voter tendencies.

It was clear early on that this was not going to happen. Events that would have destroyed other candidates barely grazed Trump. Some moments perceived as gaffes or missteps by the smart kids were actually helpful days for him, a fact that evaded analysts, pundits and consultants on both sides who never looked outside their own bubbles.

The prospects for real change came in the form of Donald Trump, a man with no elected office experience, a frequent lack of rhetorical discipline and a private history pockmarked with land mines. But one thing made all of that irrelevant: He is a genius.

He dispatched a large and talented field of fellow hopefuls. He lassoed and corralled the media tormentors who would be making any other Republican’s life hell right now. And he beat Hillary Clinton, which I continue to believe no other Republican could have done.

That’s right, the taunt from the summertime conventions—that Republicans managed to elevate the only candidate Hillary could beat—was 180 degrees wrong every day.

Voters wanted change, and wanted it so urgently that they were willing to overlook large elements of what is usually a downside: ideological blurriness, multiple marriages, a thin grasp of some issues.

If we were sitting around on Inauguration Day saying “Okay, this is cool. A Republican won instead of Hillary. Now we can see what would have happened if McCain or Romney had won, and work through the usual channels to move America back the other way—” that would be a virtual guarantee of insufficient change.

This is not 1980. We are not a nation in need of a remedy after four years of Jimmy Carter. We are a nation in need of a defibrillation after the heart-stopping pathology of thirty years of leftward lurch since Reagan left. From the broken “no new taxes” pledge of the first Bush to two terms of the Clintons to two well-intentioned but big-spending terms of the second Bush to the eight poisonous years of Barack Obama, our ills are exponentially worse than when Reagan took office. In terms of fiscal woes, social rot, global jihad, porous borders, educational decay and a host of other crises, this election correctly posed the question of whether America as we knew it could actually survive if voters did not rescue it.

Well, we did. And the fact that everybody is freaking out is a superb indicator that the correct magnitude of change is at hand.

It has taken decades to screw America up this badly. It cannot be turned around in one Trump term, or even two. But his leadership can correct our course with a vigor that suggests the kind of wake-up call that has been in the making for decades.

This is not a time for blue-ribbon panels or ten-year projections or hand wringing from the usual suspects about how hard change is. We needed a force of nature, a nuclear reactor of change energy that will upset countless apple carts and raise countless eyebrows. And we got it.

Trump sees issues as a negotiation. He opens with a position that may seem absurd, then dials it back, seeming more reasonable and measured in the process, pleased to reach what looks like a compromise but was really what he wanted all along. If that seems like a haphazard way to govern, it is worth reviewing whether any other way has been worth a flip for the last few decades.

So here it is. Real change. Bringing with it real nervousness, real opposition, even real hysteria from some. But if President Donald Trump can surprise us in office as thoroughly as he did on the way to that office, the future may hold something that has become a ridiculed concept hijacked in the bombast of the era of Obama: real hope.