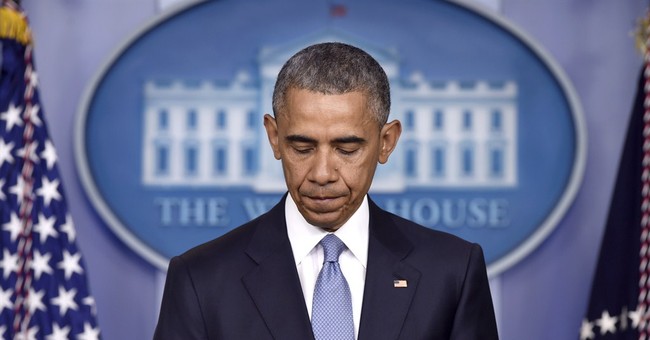 Every American should join President Obama in his expression of condolences to the families of two hostages killed in January during a counterterrorism operation in Pakistan. Our prayers properly go to the loved ones of American doctor Warren Weinstein and Italian aid worker Giovanni LoPorto.

But no one should sign on to the painful exercise of hand-wringing self-flagellation that the President felt compelled to attach in his Thursday morning revelation of the details.

For about sixty seconds, his remarks looked like a rare example of an occasion free of political agendas. Even as he mused about the families’ pain “as a husband and father,” it was possible to think that this was just a very nice and heartfelt outreach to people who had felt the sharpest sting of war.

But few things are so simple in ObamaWorld. It soon became clear that the President’s hand-wringing over the two non-combatant deaths was the refrain of a familiar tune that he sings when he wants us all to hate the fact that we are over there in the first place.

“I take full responsibility,” he told the press room. “I regret what happened.”

Not to over-analyze, but any president properly regrets the loss of innocent life in a wartime operation. That regret must always be a by-product of a commander-in-chief’s prime responsibility: to remind all, even the grieving families of hostages, that this can be the cost of war— that if people are going to pack for magnanimous sojourns into a war zone, some might die.

And when they do, we should not bludgeon ourselves with regret over launching the operation in the first place. We are at war, at least technically, until Obama can yank the last soldier out, and that means we may occasionally target buildings that have actual terrorists in them.

We will always do our best to have some awareness of nearby innocents so that we can measure those factors against the value of the target. But if a mission ends and the death toll includes both jihadists and the hostages they held, the last thing we should do is signal that we consider it an automatic error to have given a go for the mission.

This is precisely the Obama view, and he made sure we knew it. “On behalf of the United States government, I offer our deepest apologies.” No, sir. We offer prayers, loving support and appreciation for people killed on a battlefield who are there to do aid work, but we do not— ever— telegraph to the enemy that their presence in a building is a guarantee against a counterterror operation.

Yet there was the president, throwing the entire operation under the bus, even while admitting that it was carried out by the book in an area known for al Qaeda leadership targets. “This operation was fully consistent with the guidelines under which we conduct counterterrorism efforts in the region…. Based on the intelligence that we had obtained at the time, including hundreds of hours of surveillance, we believed that this was an al Qaeda compound, that no civilians were present, and that capturing these terrorists was not possible.”

Then he confirmed the operation achieved its goal: “We do believe that the operation did take out dangerous members of al Qaeda.”

So there ’s the bottom line. The operation was successful, but we regrettably did not know that there were hostages inside. Intelligence will not always be perfect. Sometimes there will be innocent lives in the line of fire. When that occurs, the very worst thing an American president can do is publicly agonize over such a fact of wartime life while displaying no overarching grasp of what war’s costs can be.

So we are left with a president who addresses war’s challenges, but without context that values the justness of our cause, preferring a dark context whose goal is to blame our war effort for a “mistake.”

A president obsessing over the avoidance of any innocent loss of life provides a strong energy boost to the enemy. Instead of putting the loss of the hostages into a proper context, Obama willfully allows their deaths to color the entire war effort.

Al Qaeda should know that none of its hiding places is safe, and that none of its kingpins will be spared if we have a clear shot. It is right to pause and offer praise and empathy for the aid workers lost in this operation, but if we come across as militarily discombobulated when things like this happen, terrorists will pack their havens with as many human shields as possible. An already dangerous part of the world became even more hazardous for Westerners the moment President Obama made his priorities clear.

Those priorities do not include a full-throated support for the American men and women who are putting their lives on the line so that global jihad can be thwarted. This presidency never misses an opportunity to ramp down U.S. influence in the part of the world filled with those who would kill us where we stand. The president never misses an opportunity to spread discord and distaste for an American presence that had stabilized Iraq the day he took office.

So this week’s proper appreciation for hostage lives lost morphed into the latest blame-us opportunity, designed to cast shadows over a war effort the president would like to dismantle as fully as possible in his remaining 21 months.

Such disdain for America as a force for good is offensive enough. But there was an extra affront buried within the President’s wordy over-explanation of why we must now embark on endless navel-gazing to achieve an unreachable goal of zero innocent lives lost: it’s because we are just so open and honest and transparent:

“As soon as we determined the cause of their deaths, I directed that the existence of this operation be declassified and disclosed publicly. I did so because the Weinstein and Lo Porto families deserve to know the truth. And I did so because, even as certain aspects of our national- security efforts have to remain secret in order to succeed, the United States is a democracy committed to openness in good times and in bad.”

I’m sure this came as a surprise to the families of Chris Stevens, Sean Smith, Tyrone Woods and Glen Doherty. Their loved ones did not exactly see openness and transparency after their loved ones died in the flames of Benghazi.

But in September 2012, there was an election to win, and the whole openness thing might have proven problematic. But today, this administration has a war to lose, and if lengthy introspection and self-doubt can move that ball down the field, then transparency is back in fashion.