Lindsey Stroud
|
Posted: Aug 13, 2021 12:01 AM
Share   Tweet
The opinions expressed by columnists are their own and do not necessarily represent the views of Townhall.com. 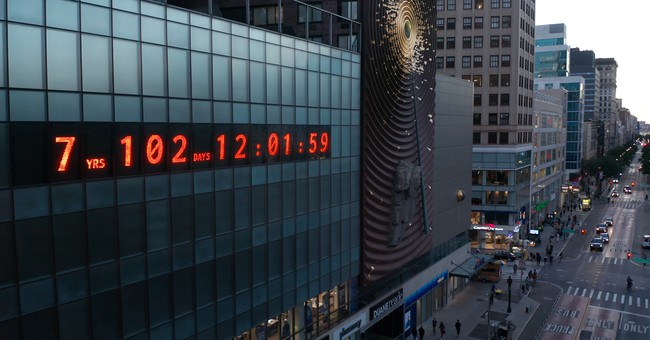 Another report on global warming and another call to address climate change. Again, a notable energy source is missing from the conversation. Yes, nuclear energy – that stuff of “nightmares.” A damning report claims that we are doomed, yet policymakers continue to refuse to embrace nuclear powered energy solutions and promote taxpayer-funded renewable options such as wind or solar — options that will struggle to meet our energy needs anytime soon.

On August 8, the Intergovernmental Panel on Climate Change (IPCC) released their sixth report titled Climate Change 2021: The Physical Science Basis. The report’s publication was delayed due to the COVID-19 pandemic and is the most up-to-date report from the working group. The IPCC declares that humans are causing the planet to warm and that unless there are drastic changes made today, global warming may reach a point of no return.

As with every report on global warming, media and policymakers make drastic calls for countries to reduce their greenhouse gas emissions. Sen. Bernie Sanders (D-Vermont) tweeted that Congress “must take bold action NOW to combat climate change.”. The Sierra Club noted that their followers “may be feeling some combination of overwhelmed, anxious, sad, despairing” after reading the report, but to not despair. Now “is the time to fight” and to “act when our members [of Congress] are back home to hear from their constituents for August Recess.”

The report calls for major action to reduce greenhouse gas emissions, focusing on the reduction of carbon dioxide (CO2). In the United States, the burning of fossil fuels for transportation and electricity, including coal, natural gas, and petroleum, accounts for the majority of greenhouse gas emissions. In 2020, according to the U.S. Energy Information Administration, of U.S. energy consumption sources, petroleum and natural gas accounted for 34 percent each, and coal accounted for 10 percent. Non-fossil energy sources made up 21 percent of energy consumption in 2020. And, for CO2 emissions, petroleum accounted for 45 percent of emissions in 2020.

If policymakers truly want to reduce greenhouse gas emissions, we must continue to transition away from fossil fuel use. Unfortunately, policymakers seem to promote only one type of energy – renewable energy such as solar and wind. Yet, policymakers persistently ignore a massive power source that emits little to zero CO2 emissions: nuclear power.

Despite a few headline-grabbing nuclear incidents, nuclear power is a relatively safe power resource. On September 3, 1948 – 73 years ago – electric energy was first produced by a nuclear reactor in Oak Ridge, Tennessee and since then there have been only a handful of “serious nuclear accidents.” In fact, the Union of Concerned Scientists notes that such incidents “have been few and far between.” Notable nuclear power plant problems include Three Mile Island (Pennsylvania) in 1978, Chernobyl (Ukraine) in 1986, and the most recent Fukushima, Japan accident in 2011.

While these nuclear incidents are household names, it may come as a surprise that nuclear energy safety rivals that of renewable sources and is actually credited with saving countless lives.

Nuclear energy is also an overwhelmingly environmentally-friendly energy resource. Nuclear power plants “produce no greenhouse gas emissions during operation” and during the course of its lifetime, a nuclear power plant “produces about the same amount of carbon dioxide-equivalent emissions per unit of electricity as wind, and one-third of the emissions per unit of electricity when compared with solar.”

The  (DOE) has called nuclear energy “America’s work horse.” In 2021, DOE noted that nuclear energy has been providing “consistent, reliable, carbon-free power to millions of Americans” for six decades. According to the DOE, “nuclear energy has by far the highest capacity factor of any other energy sources.” Indeed, in 2020, nuclear power plants produced “maximum power more than 93% of the time during the year.” For comparison, wind and solar energy’s capacity factor for 2020 were at 35.4 percent and 24.9 percent, respectively. Essentially, in 2020, nuclear power plants were “2.5 to 3.5 times more reliable than wind and solar plants.” In short, a 2014 report by the Brookings Institute found that policies that favor wind and solar against hydro, nuclear, and natural gas “are a very expensive and inefficient way to reduce carbon dioxide emissions.”

Should lawmakers truly want to reduce greenhouse gas emissions, energy policies must be rooted in sound science. As the former Oak Ridge National Laboratory administrator and nuclear physicist Alvin M. Weinberg remarked in 1976 (the last year that the United States had ordered a nuclear power plant to be built), “We nuclear people have made a Faustian Bargain with society. On the one hand we offer-in the catalytic nuclear burner (i.e., the breeder)-an inexhaustible source of energy…But the price that we demand of society for this magical source is both a vigilance and a longevity of our social institutions that we are quite unaccustomed to.”

The country shouldn’t be rejecting nuclear power because of isolated, headline-grabbing issues, but rather embrace the amazing technology while learning from past lessons.