Candidates and the Media Need to Show Courage 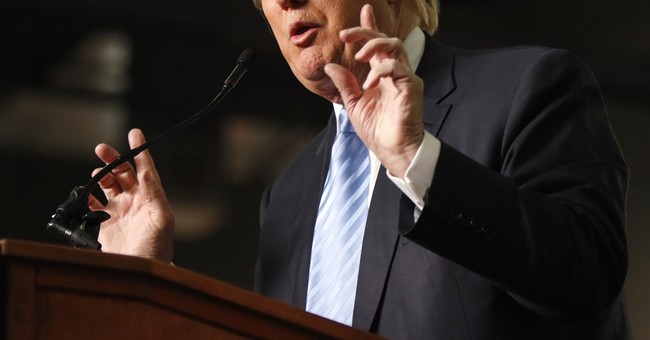 Next week's Republican presidential debate will be a test for the candidates standing alongside Donald Trump. Though most of them have criticized Trump's latest outrage -- a call to ban all Muslim tourists, business travelers and immigrants from the U.S. for some unspecified time -- they have not done so uniformly or with equal passion. More than any others during this campaign, Trump's remarks present the candidates with an opportunity to show courage and leadership. They need to speak out onstage -- and do so with one voice. But they are not the only ones. The media need to show courage, as well.

Trump shows no sign of falling in the polls. Somewhere between one-quarter and one-third of Republican primary voters support him, some large portion of whom do so not in spite of his continued barrage of bigoted comments but precisely because of them. This shouldn't be surprising, but it should be troubling. We've gone a long way toward eliminating racial and religious discrimination, but we can probably never entirely erase prejudice from the hearts of the few. There will always be some portion of the electorate for whom appeals to bigotry will be effective if the candidates are willing to make them.

Trump is the favorite of those voters, but he isn't alone in trying to woo them. Ted Cruz dog-whistles to those same voters, making references his intended audience hears for what they are but others can dismiss as mere policy proposals. When Cruz says he disagrees with Trump's proposal, he makes sure to let everyone know he has his own plan to deal with Muslims. Cruz would bar all refugees from countries where the Islamic State group is active -- including, apparently, those who are the direct victims of the Islamic State -- which includes a large swath of the Middle East and North Africa. Cruz said: "I like Donald Trump. ... And listen, I commend Donald Trump for standing up and focusing America's attention on the need to secure our borders." More dog-whistling to voters suspicious of Mexicans, as well as Muslims.

Standing up to bigotry isn't easy, especially in a political campaign in which candidates are looking for every advantage they can muster. It has been a while since we've seen candidates making blatant appeals to prejudice, but the practice had a long run in American politics during the civil rights era. Southern politicians from Arkansas Gov. Orville Faubus to Alabama Gov. George Wallace to Georgia Gov. Lester Maddox made their reputations by defying federal court desegregation orders and laws to appease fearful whites.

Bigotry creates its own audience, as the career of radio show host Father Charles Coughlin demonstrated in the 1930s. Coughlin became hugely popular -- at his height, he had more than 30 million listeners -- by spewing anti-Semitism over the radio waves. At the outbreak of World War II, radio stations began refusing to carry Coughlin's program, which suggests one further way to counter the Trump phenomenon.

The GOP didn't create Donald Trump, and every one of his opponents wishes he would disappear because Trump makes it difficult for anyone else to get attention. Trump is aided and abetted by the media because they provide the megaphone by which Trump reaches his audience. Trump's outrageous comments provoke blanket TV and print coverage and then garner invitations for him to appear on TV and give radio talk shows endless opportunities to invite his supporters to weigh in favorably.

What if the media exercised some responsible discretion by not inviting Trump on to spread his hate? In the wake of his latest rant, Trump appeared on Fox News Channel, MSNBC, CNN and ABC, with in-person and call-in interviews lasting from several minutes to more than a half-hour. No candidate can buy this amount of time; indeed, Trump has run a shoestring media campaign so far, spending less than $300,000 on radio ads in a few early-primary states, according to The Hill.

In effect, Fox News Channel, MSNBC, CNN and other networks are making in-kind contributions to Trump by giving him so much more airtime than they give the other candidates, and it isn't just because he's the front-runner. I don't remember Mitt Romney, John McCain or George W. Bush -- or any other candidate -- getting this kind of treatment in previous GOP contests.

It's time for the media to just say no to Donald Trump. If we disdain prejudice and bigotry, what better way to lessen their effect than to stop giving their proponents more airtime?