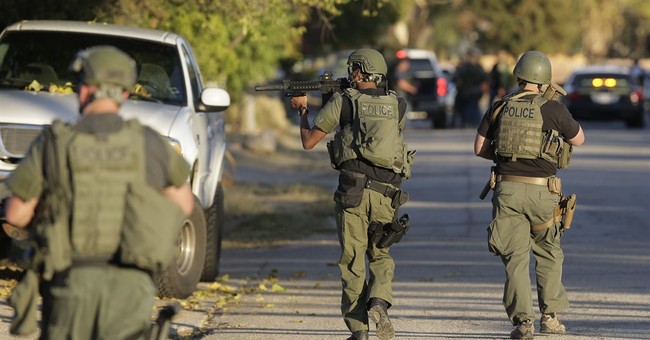 Trending
Everything we know so far about the slaughter of 14 people in San Bernardino, California, points to Islamist terrorism. Yet President Obama's comments on Wednesday suggest he thinks the best response is to stiffen gun control laws. "The one thing we do know is that we have a pattern now of mass shootings in this country that has no parallel anywhere else in the world. And there are some steps we could take not to eliminate every one of these mass shootings, but to improve the odds that they don't happen as frequently: common-sense gun safety laws, stronger background checks."

President Obama is eager to have a debate over gun violence but he seems loath to discuss terrorism on American soil. Whether it was in response to the killings in California or the massacre of soldiers at Fort Hood, Texas, or the Boston marathon bombings, the president gets cold feet when it comes to condemning Islamist terrorism.

After Nidal Hasan murdered 13 of his fellow soldiers on Nov. 5, 2009, President Obama took to a podium for a previously scheduled press event and gave "shout outs" to participants for several minutes before turning to the deadly events of the day, which he described only as "a horrific outburst of violence." Even after investigators learned that Hasan had been communicating with Islamist terrorist Anwar al-Awlaki prior to his attack, the government continued to classify the massacre as "workplace violence."

In the aftermath of the 2013 Boston bombings, the president exhibited the same dispassionate demeanor -- Obama Cool -- that has characterized most of his pronouncements on terrorism. "We will find out who did this; we'll find out why they did this. Any responsible individuals, any responsible groups will feel the full weight of justice," he said. He finally described the bombings as "an act of terrorism," but only after considerable public criticism of his failure to do so earlier. And even then, he qualified his remarks by noting, "Any time bombs are used to target innocent civilians it is an act of terror."

In the American and French terrorist incidents, the main perpetrators were either born or grew up in the societies they attacked. They were domestic terrorists motivated by a radical, religious-based ideology.

Islam is not synonymous with Islamism. The overwhelming majority of Muslims do not adhere to the Islamist ideology that drives terrorists like Nidal Hasan, the Tsarnaev brothers or the seven men who murdered 130 Parisians. Islamism is defined by its bloody call to jihad against unbelievers and imposition of a caliphate over Muslims. Terrorism is the method Islamists employ, but it is their fanatical religious beliefs that drive them.

When our leaders cannot even bear to name the problem, it is hard to imagine they can solve it. President Obama isn't alone in refusing to utter the phrase Islamist terrorism. Repeatedly pressed on the issue at the second Democratic presidential debate, Hillary Clinton refused to say the words "Islamic terrorism" when referring to what happened in Paris.

Yes, we have too many mass shootings in the United States -- and we need to find ways of preventing them. But what took place in San Bernardino this week wasn't only a mass shooting. The husband and wife who donned combat gear and armed themselves with semi-automatic weapons, hundreds of rounds of ammunition and bombs were likely on a mission to kill unbelievers in a grotesque perversion of religion. If we are to prevent further such attacks, we need to focus as much on the ideology that drives them as we do on the weapons they use. But we can only do so if we are willing to call these acts what they are: Islamist terrorism.