No Defending the Indefensible 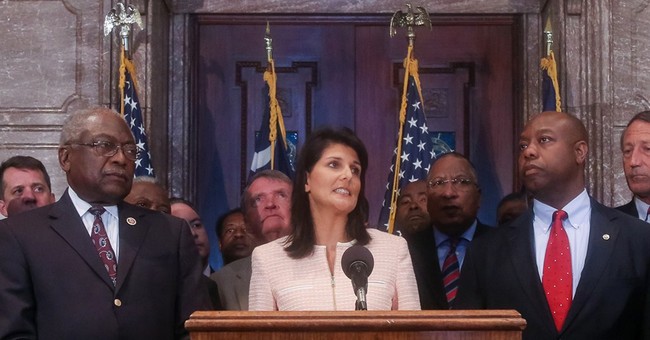 Trending
I have never been prouder to be a Republican than when I watched South Carolina Gov. Nikki Haley, U.S. Sen. Lindsey Graham and U.S. Sen. Tim Scott -- all Republicans -- call for the Confederate flag to come down on the statehouse grounds. Other prominent Republicans from states that incorporate the Confederate symbol into their own state flags also called for changes. These moves took courage of a kind too many politicians either lack altogether or fail to exercise when they think it might lose them votes.

But not all conservatives are happy. Talk-show host Rush Limbaugh warned that the real motivation of those who want to bring down the Confederate flag is "destroying the South as a political force," and that the next target will be the American flag. Provocateur Ann Coulter told Fox Business News, "I'd really like to like Nikki Haley since she is a Republican, but on the other hand, she's an immigrant and does not understand America's history." Coulter's words say a lot about her own ignorance, not to mention prejudice: Haley is American-born, and it's Coulter's understanding of history that is faulty.

Coulter and some other critics seem to think the flag is a symbol of bravery. Coulter says, "It was a battle flag -- it is to honor Robert E. Lee," the Confederate general who led the Confederate forces. "Anyone who knows the first thing about military history knows that there is no greater army that ever took the field than the Confederate army," according to Coulter. Except, of course, that Lee's army suffered disastrous defeats that finally brought an end to the most deadly war in U.S. history when he surrendered to Union Gen. Ulysses S. Grant at Appomattox Court House.

No doubt many Confederate soldiers were brave on the battlefield -- but so, too, were many individuals who fought against the United States of America, and that, after all, is exactly what Lee and the forces he commanded did. Why should we honor their cause, which was to destroy the union?

As military historian Max Boot noted in a blog post in Commentary Magazine, the controversy goes beyond the flag. States in the Old Confederacy go out of their way to honor not only Lee, but also Jefferson Davis, president of the Confederate States, and Nathan Bedford Forrest, a Confederate general known for his massacre of 300 black Union soldiers at Ft. Pillow, Tenn., whom he ordered slaughtered rather than taken prisoner. Boot says such men "were traitors to this country, inveterate racists and champions of slavery. Modern Germany does not have statues to Erwin Rommel even though he -- unlike Lee -- turned at the end of the day against the monstrous regime in whose cause he fought so skillfully."

Conservatives have been in the forefront of opposing revisionist history -- so why is it now so hard for some conservatives to recognize that efforts to rewrite the history of the Confederate flag is revisionism writ large?

The flag that Limbaugh and Coulter want to defend had largely receded from public view in the years after the Civil War except for its use in reenactments and other historical contexts. Segregationists revived its display at the Dixiecrat Convention in 1948, a party formed by Southern Democrats who objected to President Harry Truman's integration of the armed services and a proposal to include a civil rights plank in the Democratic Party platform.

At that moment, the flag took on a clear meaning, if it were ever in doubt. Georgia changed its flag to include the Confederate symbol in 1956 -- two years after Brown v. Board of Education outlawed school segregation. Governors in Alabama and South Carolina raised the battle flag over their state Capitols only in 1961 and 1962, respectively. These acts sent a clear message of resistance to civil rights.

Seven Southern states currently incorporate symbolic references to the Confederacy in their state flags: Alabama, Arkansas, Florida, Georgia, Mississippi, North Carolina and Tennessee. All of them should rethink those symbols. It isn't just that they evoke a racist past; they are inherently un-American. They should offend not just those Americans whose ancestors were slaves, but all of us.

The Confederate states fought the Civil War to preserve slavery and were happy to destroy the union to do so. Theirs was not a noble cause, but a treasonous one. No one should see a need to defend it, least of all Republicans.