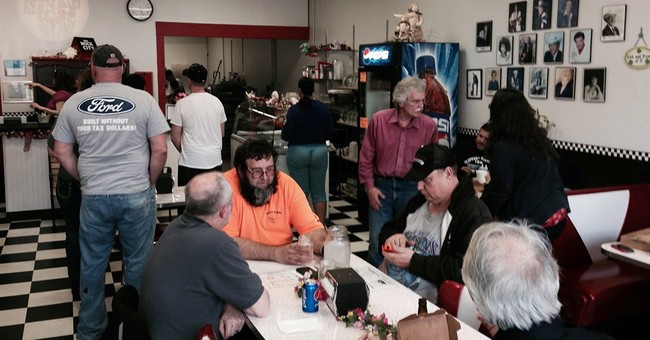 A significant number of Americans seem to no longer understand our constitution, our system of government or the structure of our legal system. The outcry over crowdfunding support for litigants is a good example.

When Memories Pizza in Walkerton, Indiana, was forced to shut down because of threats, supporters rallied to help them, raising over $800,000 on a GoFundMe fundraising page that had been set up for that purpose.

The left went ballistic. It wasn't enough that the owners of the misbegotten restaurant had been given a public flogging for an opinion the press had solicited (as opposed to an actual incident of discrimination). Social media lit up with condemnation of anyone who would dare provide financial support for those whom our self-appointed elites had deemed deserving of public opprobrium and -- apparently -- bankruptcy.

So when Christian bakers Aaron and Melissa Klein were forced out of business and fined $135,000 for refusing to make a cake for a lesbian wedding, the next target was clear.

Sure enough, after a GoFundMe site was set up to help the Kleins defray their legal expenses, the thought police went into action. Under pressure, GoFundMe quickly shut down the site that had raised over $110,000 for the Kleins. It also shut down a site created to help Arlene's Flowers, another company whose owner, Barronelle Stutzman, has faced civil fines for refusing to provide services to same-sex marriage ceremonies, citing her religious faith.

Most recently, the site shut down fundraising efforts to help the families of Baltimore police officers charged in the death of Freddie Gray.

The company issued a statement saying that they had changed their policy, which now bans any fundraising campaigns "in defense of formal charges or claims of heinous crimes, violent, hateful, sexual or discriminatory acts." Competitor site IndieGoGo soon followed suit.

Here's the magic formula: Make a claim of a "hateful" act (easy enough; every policy disagreement is "hate" these days), use social media and litigation to threaten and financially devastate your target, and then prevent any financial support from reaching them.

Of the examples I've mentioned, only the Baltimore police officers were actually charged with a crime. The Kleins and Stutzman are facing civil penalties. The O'Connors were never charged with anything. Even so, it is worth remembering a few essential points about our legal system:

First, every criminal defendant is presumed innocent until proven guilty.

And yes, Christian bakers, florists and pizza makers are entitled to present their defenses in civil cases as well.

Third, judges make mistakes, and laws get overturned. In countless cases -- both criminal and civil -- decisions are reversed on appeal. In other words, just because someone is accused of wrongdoing or even found liable (or guilty) at trial doesn't mean that they won't be exonerated later.

Most notably (and this shouldn't be news to the "income inequality" Jeremiahs), many people who find themselves embroiled in litigation -- whether criminal or civil -- do not have the money to defend themselves. Should litigants therefore lose their legal rights? Should their families be left destitute? Why should others be precluded from assisting with legal defense expenses?

These actions are not merely intended to silence the defendants; they are designed to silence an unpopular viewpoint. The argument has been made that GoFundMe is a private company and can choose how and with whom to do business. Absolutely true. (Although apparently other businesses are not accorded those same rights.) But GoFundMe's business model entails taking a percentage of the donations raised. So just as they can decide not to allow support for beleaguered Christian businesses or police officers, so, too, can consumers decide not to support any of the other causes that are promoted there.

It's a shame. GoFundMe has raised over $1 billion in just four years, including nearly $1 million for Boston Marathon bombing victim Jeff Bauman and over $200,000 for Natalie Dubose, whose bakery was severely damaged during the riots in Ferguson, Missouri, last summer. There are innumerable other instances where GoFundMe has made a difference in the lives of those impacted by hardship, and like millions of others, I've contributed. But on balance, I would prefer to support a company with the courage to stand up for all Americans' legal rights. Even when that's not popular.