Larry Kudlow
|
Posted: Jan 09, 2016 12:01 AM
Share   Tweet
The opinions expressed by columnists are their own and do not necessarily represent the views of Townhall.com. 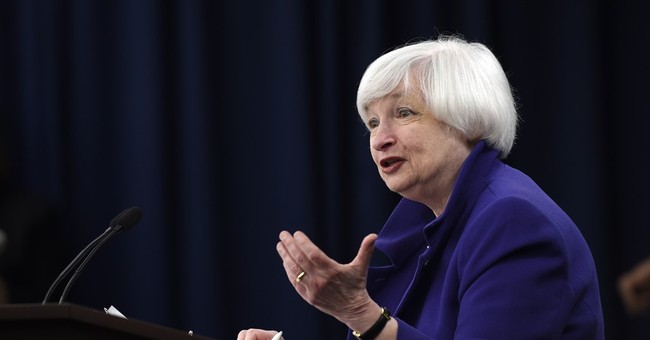 The Dow Jones lost over 1,000 points this week. It’s down 9 percent over the past year. The broader S&P 500 also got clobbered, and is down 7 percent in the past year.

What’s going on? Is the world coming to an end? Is it 2008 all over again? Will the U.S. import recession from a falling Chinese yuan? Are hard-working middle-class wage earners about to drive up the inflation rate?

First up, the drop in the Chinese currency is about 6 percent since last August and the offshore (Hong Kong) yuan has fallen 7.5 percent against the greenback since last April. This is not a deliberate government attempt to devalue. Instead, it reflects capital flight from an economy still looking for a bottom. It also reflects the unwinding of a hugely overvalued speculative stock market.

Actually, the Chinese are trying to stop the yuan from falling. Their FX reserves dropped $108 billion in December with overall reserves falling $418 billion. In all likelihood, the People’s Bank of China has been selling dollars to try to support the yuan. But it can’t beat the market, which is saying the yuan is overvalued for a weak economy.

Now, if the Chinese keep selling dollars, they will create deflation, as they withdraw money from their economy. But here’s the key point: China must let market forces determine the currency price and, by the way, the level of stocks.

If the Chinese allow markets to operate and the yuan keeps falling, it’s actually inflationary, not deflationary. It’s just like the dollar: A rising dollar is a tightening, and a falling dollar is an easing. A falling yuan driven by market-oriented capital outflows would be a stimulative easing policy -- if the authorities let it happen.

Meanwhile, U.S. exports to China, at $118 billion, make up two-thirds of 1 percent of U.S. GDP. That’s miniscule. This idea of importing recession is gibberish. In fact, Chinese t-shirts and sneakers will be cheaper for American consumers as the dollar goes up and the yuan goes down.

So there’s no recession coming from China. If anything, a cheaper yuan and a more accommodative monetary policy amounts to inflationary stimulus.

Let me debunk another point. A strong December jobs report, with a 292,000 gain in nonfarm payrolls and a 485,000 increase in the small-business household survey, is generating fears that the Fed will raise its target rates sequentially, with one-quarter-point rate hikes every quarter in 2016 and beyond. Influential Fed vice chair Stanley Fisher predicted this last week and the employment report backs him up.

Does this mean the nascent jobs recovery might be snuffed out, all because the Fed believes too many people are working and a bit more compensation is a bad thing? Because it thinks more people working causes inflation?

More people working does not cause inflation. And the chief goal of the Fed should be price stability, or near-zero inflation. That’s what we have now.

The Fed’s Phillips curve model isn’t working anyway. The unemployment rate has come down to 5 percent and the inflation rate is near zero. According the Fed, inflation ought to be 4 or 5 percent. It’s not.

The dollar is up. Oil and commodities are down. There is no global rise of inflation. And there’s a strong worldwide demand for greenbacks. This is good, not bad, according to veteran free-market economist Alan Reynolds. He’s right.

What causes inflation? Bad money. Excess money. Too much money chasing too few goods. How do we measure this? We use market-price indicators, such as commodities, the dollar exchange rate, and Treasury inflation expectations.

And right now those indicators say the Fed should let workers prosper in an era of zero inflation. Middle-class workers have suffered enormously in recent years. Why not let them prosper?

Stock market investors should be concerned about shrinking profits. Unit labor costs, due to miniscule productivity, are starting to rise faster than prices. That’s a problem for stocks, since profits are the mother’s milk and lifeblood of the economy.

What’s the solution? A corporate tax rate of 15 percent for large and small businesses, the easy repatriation of overseas cash, and an immediate tax write-off for new investment.

New capital inflows and a surge in business investment could double the economic growth rate from 2 to 4 percent, which would do more to benefit those very same middle-class wage earners than any other policy.

Supply-side policies to reduce burdensome taxes and regulations will grow the economy and reward workers. That’s what’s missing from the picture. The Fed should wise up and stick to price stability rather than slamming workers. And China should let markets determine currency and stock prices instead of the central planners.

Then we can get bullish again.