JAYBerns: Rebels Without a Clue

Larry Elder
|
Posted: Apr 21, 2016 12:01 AM
Share   Tweet
The opinions expressed by columnists are their own and do not necessarily represent the views of Townhall.com. 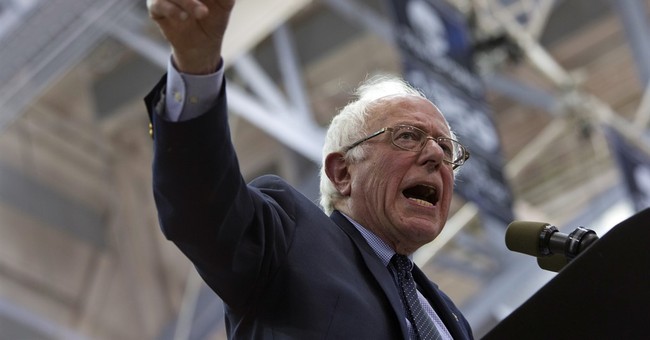 Those aged 18 to 24 have seen their incomes decline under President Barack Obama. Worse, they were one of his most reliable voting blocs. Yet Hillary Clinton, the Democrats' likely 2016 presidential candidate, says, "I don't think President Obama gets the credit he deserves for digging us out of the ditch Republicans put us in"? Obama, when asked to name the accomplishment for which he is most proud, brags, "I'm proud of saving the American economy."

The numbers are stark.

The Obama recovery, which began after the recession ended in June 2009, has averaged 2.2 percent inflation-adjusted annual GDP growth over the next 25 quarters, as opposed to the average recovery's 3.9 percent GDP growth for the last eight recessions dating back to 1960.

President Obama, to date, is the first modern president to reign over a recovery in which not a single year's economy grew at least 3 percent. Since 1 percent of annual growth roughly translates to one million jobs per year of recovery, this means Obama's subpar recovery has produced some seven million fewer jobs than he would have had he simply skipped work and played golf the last seven years. By contrast, the Ronald Reagan recovery averaged 4.8 percent GDP growth, which translates, according to Heritage Foundation economist Stephen Moore, into a per-family average of $20,000 more in income.

While careful not to explicitly criticize Obama, Bernie Sanders denounces the "rigged" economic system that enriches "millionaires and billionaires." He promises to further tax "the rich," who do not "pay their fair share," and evil corporations that pay no taxes because they "are stashing their profits in the Cayman Islands and other offshore tax havens." He rails against "Wall Street speculation" and their "greed and corruption" that "crashed the economy." Through their political donations, Sanders explains, Wall Streeters "control the politicians," thus ensuring that "the rich get richer and the poor get poorer."

If you are a left-wing millennial voter, defined as one aged 18 to 35, this kind of scapegoating rings true.

Sanders offers "free" tuition, paid for with a "tax on Wall Street speculation," a better sounding deal than Clinton's proposal for "debt-free" tuition.

On health care, Clinton wants to "build on" Obamacare. During one debate Clinton even confirmed her position that Obamacare's higher premiums and higher copays are just "glitches." Sanders offers "free health care" through "Medicare for all," financed, of course, by taxing "the rich."

Not to be out race-carded, Sanders promises to "end institutional racism" when he becomes president. He rejects writing a check for slavery reparations, but says: "What we should be talking about is making massive investments in rebuilding our cities, in creating millions of decent paying jobs ... basically targeting our federal resources to the areas where it is needed the most and where it is needed the most is in impoverished communities, often African-American."

Clinton, by contrast, looks positively reactionary. After all, President Bill Clinton got rid of Glass-Steagall, the Depression-era regulation that prevented commercial banks from engaging in investment banking. Sanders says: "I was proud to lead the fight in the House against repealing the Glass-Steagall Act. I predicted then that such a massive deregulation of the financial services industry would seriously harm the economy."

The Bernie "feel the Bern" Sanders phenomenon is simply the logical extension of decades of left-wing indoctrination against "the rich" who supposedly "rip off" everybody else. He is an "authentic" class warrior who believes capitalism is a racist, exploitative system that benefits corporate America, unfairly creating winner and losers -- and if you are the latter it's because capitalism is "rigged." He's un-rich (by Washington standards), unkempt and unwedded to the standard wealthy Democratic mega-donor class. He is out-raising Hillary, his money primarily coming from people donating $200 or less. He's Fidel Castro without the guns and battle fatigues.

The irony, of course, is that Hillary Clinton and her party have longed used the same rhetoric employed by Sanders. For example, Democratic National Committee Chairwoman Debbie Wasserman Schultz says Republicans want to "literally drag us all the way back to Jim Crow laws." Similarly, when wealthy former House Speaker Nancy Pelosi cynically derides "big oil," it's anti-Republican Politics 101.

Never mind that his policies would continue the same subpar job and GDP numbers we've seen under Obama, putting us on a course for the kind of sclerotic job and GDP growth typical of Western European democracies. Sanders offers Obamanomics -- on steroids. And don't get him started on "climate change" and the supposed moral imperative to end our planet-destroying reliance of fossil fuels.

To the left-wing jobless, angry and young, Bernie Sanders is far beyond simple "hope and change." He's hope and nirvana -- on someone else's dime. What's not to like?