When Did Calling Obama a Muslim Become a Slur? 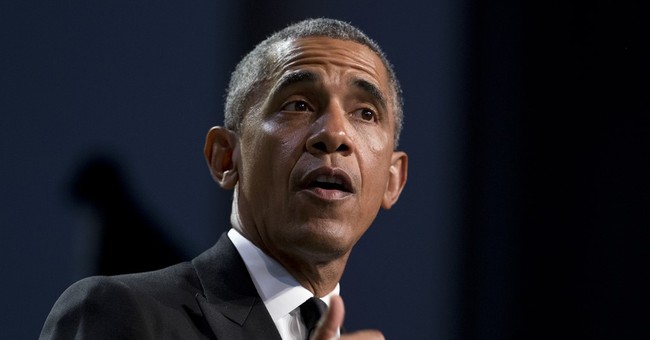 Memo to the strategist: Islam is a religion, not a race. But Democratic standard operating procedure is as follows: Whenever possible, convert any issue someway, somehow, into an accusation that Republicans are "racist." The tepid economic recovery continues, most Americans believe our foreign policy is on the wrong track and only 21 percent of Americans support Obama's Iran deal. But hey, Republicans are racist.

Over at CNN, Anderson Cooper -- an alleged "journalist" -- crossed the line and became a Jorge Ramos-like activist. Cooper indignantly fumed that Donald Trump "doesn't have the guts to stand up to some loudmouth in his own crowd" and set the town-hall man straight. Today, this is what passes for "journalism."

Speaking of the supposed Republican belief the Obama's a Muslim, a February 2015 Washington Post blog article cited a survey conducted late last year by YouGov for the Cooperative Congressional Election Study. That survey found a majority of Democrats do not believe that Obama is a Christian "deep down." The survey asked, "Which of these do you think most likely describes what Obama believes deep down? Muslim, Christian, atheist, spiritual, or I don't know."

According to the survey, only 45 percent of Democrats believe Obama is a Christian at heart, while 26 percent "don't know," 17 percent said he's "spiritual," 10 percent think he's Muslim and 2 percent believe he is an atheist. Added up, this means most  Democrats doubt Obama's professed Christianity. Apparently, within the Democratic Party, many "racist bastards" reside.

Where was Anderson Cooper during the 2008 campaign? Then-Sen. Hillary Clinton's campaign, as Politico's John Heilemann recently confirmed, stoked Obama-is-a-Muslim-rumors. On "60 Minutes," Clinton was asked whether she believed then-Sen. Obama was Muslim. She replied, "No," and said she takes Obama at his word. But then she slyly added, "There is nothing to base that on -- as far as I know." Nudge, nudge, wink, wink.

Speaking of "correcting" those who say false things, where were the media scolds when Hillary Clinton likened Republicans who want to defund Planned Parenthood to "terrorist groups"? Similarly, the media were AWOL when President Obama outrageously likened Republicans, opposed to the Iran deal, to "Iranian hardliners." You know, the ones who chant "death to America" and "death to Israel"?

They must have forgotten about the Robb-Silberman report from the bipartisan Commission on the Intelligence Capabilities of the United States Regarding Weapons of Mass Destruction. It was set up by Congress to investigate the intelligence on which the Iraq War was based. Yes, the commission concluded that the intelligence reports were wrong, but found no deception. Silberman, in a Wall Street Journal piece, called the continued assertion that Bush misled the nation "not only false, but ... dangerously defamatory. The charge is dangerous because it can take on the air of historical fact -- with potentially dire consequences." Yet when pundits, Democrats and even "reporters" like Fournier say Bush lied -- crickets from the media.

It was the current president of Egypt, Gen. Abdel Fattah al-Sisi -- not Donald Trump -- who called for an Islamic religious reformation and said that "the entire world is waiting" for it. On New Year's Day 2015, before an audience of Muslim clerics and scholars, al-Sisi said: "It's inconceivable that the thinking that we hold most sacred should cause the entire Islamic world to be a source of anxiety, danger, killing and destruction for the rest of the world. ... It's antagonizing the entire world! Does this mean that 1.6 billion people (Muslims) should want to kill the rest of the world's inhabitants -- that is 7 billion -- so that they themselves may live? Impossible!"

So let's put the Trump-didn't-correct-the-man-who-called-Obama-a-Muslim furor in context. This is merely the latest example of left-wing media hypocrisy, double standards and selective outrage.