The Democrats’ 2020 Campaign Theme Is 'You Americans Are Terrible'

Kurt Schlichter  |  Jul 22, 2019
The opinions expressed by columnists are their own and do not necessarily represent the views of Townhall.com.
Top Columns
Trending on Townhall Media 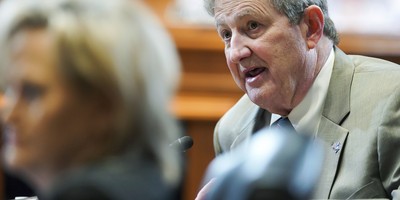 The Democrats’ 2020 theme is that you are terrible and the party’s slogan will be “Americans suck, vote for us.” The precise candidate who will employ it is not important because they all embrace the notion that punishing the essential moral failure of you and me and every other Normal American is the key goal of the Donkey Party. That goes equally for the Handsey Old Prospector, the Socialist Squaw, Crusty the Commie, Spartacus Sharpton, Starchild, the Furry, Not Ms. Willie Brown, the Unfabulous Gay Guy, and the many Unfabulous Ungay Guys.

They all agree that you are terrible because you don’t know your place, which is behind a rock pushing it endlessly uphill for the benefit of people who hate you.

Remember Animal Farm from back when you were in school and they taught it as a chilling warning about socialism instead of as a how-to manual? Remember the horse who got worked nearly to death then got sent to the glue farm?

Guess what? You’re the horse.

Your job is to work to generate taxes and feed the cities and defend the country while your betters clink Chardonnay glasses between bouts of redistributing the fruits of your labor to buy the votes of their slack Democrat political constituencies.

And besides being the engine that powers the establishment, you also fulfill another important function. You’re the liberal elite’s punching bag, the scapegoat, the convenient excuse for every flaw, failing and foul-up in the society that very same elite runs. You don’t get the credit you’re due; instead you get scorn, because that scorn both gins up the elite’s dopey allies and acts to keep you in line. It’s a stick to beat you and a chain to bind you.

Except people are getting sick of being beaten and bound. Unless you are a Never Trumper, in which case you’re probably into that scene.

You’re greedy because you don’t want to pay taxes so foreign freeloaders can get better free medical care than our vets.

You’re stupid because you think there’s just two genders and that you don’t consider a “bi-curious femme-friendly questioning two-spirit” an option.

You’re a monster for wondering why boys in drag are competing (and setting “records”) in girls’ sports and for not accepting that men have periods too.

You’re terrible for interfering in things you know nothing about by rejecting any new endless wars – how dare you question the experts who have laid down such a solid track record of success over the last three decades!

You’re a superstitious knuckle-dragger for believing in God and a heretic for denying that last week’s thunderstorm was not a direct result of Trump’s failure to enter into the Paris Accords 2.0 and finally ban drinking straws.

You’re a brute for liking guns and big cars and being able to do a push-up.

You’re everything bad, including things that aren’t even things. Just take a word and stick an -ist or a -phobe on it and that’s what you are.

No matter what, you’re wrong.

No matter what, you’re terrible.

No matter what, it’s you’re fault and it’s your responsibility to give up more of your money and more of your freedom to undo whatever is the elite’s designated crisis du jour.

It’s so tiresome. The Democrat debates weren’t debates; they were creepy clusters of consensus about why normal people are the problem. But we’re done listening, not that that keeps them from trying even though it appears their shriveled hearts are no longer in it. They just go through the motions and we’re supposed to nod our heads, accept the sentence of shame – whether decreed by a Democrat candidate or some Twitter blue check millennial “journalist” at Vox.com – then cease our uppitiness and go back to toiling to make our indolent elite richer.

But now we are committing our greatest sin among our multitudes of sins, worse than even our myriad pronoun crimes and misgendering misdemeanors.

We are refusing to submit to their agenda.

We’re refusing to accept our moral subservience and vote Democrat.

We are refusing to do as the Fredocons do and moan “Thank you, xir, may I have another?”

We are rejecting the idea that people breaking our laws should get a hug and a check instead of a cell and a boot. Got a case of the sads because you end up in a cage as a direct result of breaking the laws we enacted through our elected representatives? Then don’t come here illegally. Works every time.

We are rejecting the idea that Big Tech Democrat donors should control our discourse, and we are turning our own politicians like Josh Hawley and Ted Cruz on them despite the admonitions of our betters that True Conservative™ principles demand we honor the free market by letting Silicon Valley millennial goofs determine what can and cannot be said on-line.

And we are rejecting the notion that some possibly brother-wedding twerp America saved from a Third World hellhole has no obligation to show a little gratitude to the people who rescued her.

The glory of Donald Trump, and of Normal Americans, is that we just don’t care what the Democrats and their media and Renfieldcon allies think.

Oh, they still try to control us by appealing to us as if their moral appeals weren’t just a bad joke.

“We’re better than that!”

Who is this “we” anyway? Because elitists see no common ground with us except when they think playing the “we” card gives them some transitory advantage.

There’s no “we” when the elite talks about how racist/sexist/whateverist Normal Americans are and giggles among themselves about us rubes.

There’s no “we” when it’s time for a bailout – if you blow your money, you go bankrupt while if the Democrat donors on Wall Street do you must write them a check.

There’s no “we” when the consequences of the globalism that enriches the elite sends our jobs to Kuala Lumpur.

There’s no “we” when they hop in their private jets to wing their way to Davos to warn of the dangers of climate change and the necessity of us ditching our SUVs and taking the bus to work.

There’s no “we” when it our kids, and not theirs, who are packing up and deploying for the elite’s latest failed war.

Hard pass. Democrats. “Americans suck, vote for us” just isn’t going to fly. Instead, we have our own slogan. Here it is:

Your irredeemable badness requires counterbalancing by a left-wing hell-state that will impose upon you the iron discipline necessary to purge your essential awfulness. Want to see what then would look like – and how you might not react in the submissive way your liberal overlords desire? Then check out my action-packed yet highly amusing novels about the United States’ split into red and blue countries, People's Republic, Indian Country and Wildfire. These quality books have been called “Appalling” and have earned the fussy hatred of leftists and from the crew of the failed Weekly Standard, to the limited extent the circles in the Venn diagram depicting those two motley collections of social defectives don’t precisely overlap.