Kurt Schlichter
|
Posted: Feb 16, 2017 12:01 AM
Share   Tweet
The opinions expressed by columnists are their own and do not necessarily represent the views of Townhall.com. 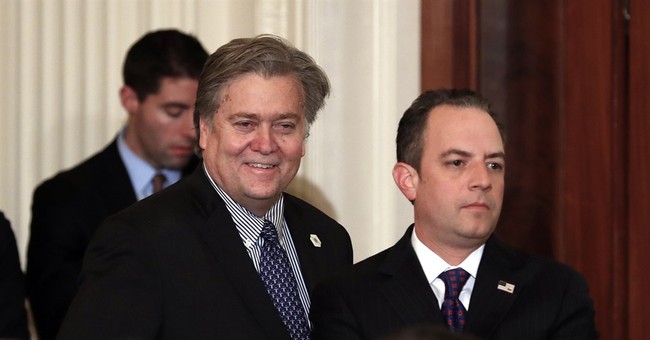 The name “Reince Priebus” sounds like the moniker of some Star Wars villain, and coincidentally you need to get in touch with your inner Darth Vader. You’re flirting with failure. The President may be publicly applauding you for the moment, but his supporters are developing grave doubts about your ability to deliver the Death Star on time and under budget. Remember, Vader was the Emperor’s chief of staff, his hatchet man, his hammer. But Vader’s success came from actual successes; sure, he had a messy personal life but he got stuff done. You need to get stuff done.

Getting stuff done is your only job. Your job is not policy and it’s not chatting off the record with the NYT/WaPo hacks who can’t wait to stick a light saber in your back. It’s not picking fights with people you imagine to be potential rivals that end up getting you trending on Twitter in a bad way. Reince, you need less drama and more results. Don’t think we voters haven’t noticed that there are all these leaks about everyone in the building – except about you and your faction. Hmmm. That insider garbage needs to end. It needs to end now.

Get stuff done. Remember, Darth Vader was foremost a manager, inspiring his team to achieve. Who have you choked out lately for sub-par performance? We’re not seeing a lot of crushed larynxes, and that’s what you need to motivate that herd of backbiting sloths we call the executive branch.

Your first couple weeks were great. Every day, there was some new awesomeness – an EO, a nomination, a tweet dissing some fake news outlet. You were inside the enemy’s decision cycle, owning the initiative, driving the media to distraction by tossing another chunk of red meat into the tiger cage just as those hacks tried to pounce on the last one. But what are we seeing now?

Nothing. Your enemies now own your decision cycle; your staff is not acting, it’s reacting.

You have hundreds of appointments to fill, each one a morale builder for the President’s base, each one a step toward taming the federal government monster. Why aren’t you filling them? If you are, why aren’t we hearing about it? Your role has a huge information operations component. You support the President’s political initiatives by ensuring people like us – you know, conservative voters – know you aren’t simply running around the White House playing political footsies with the other suits. Tell us what’s going on. Maybe you should get a crack commo team in place and stop making Spicer do that as well as holding down a full-time gig wrangling the press.

You have easy wins right there for the taking. Grab them. There are 118 vacant sub-SCOTUS judgeships and your team has named exactly none. What the hell? The Ninth Circuit disrespected your boss with such contempt that they didn’t even bother citing the key statute, and you’ve just sat there, taking it. The next day, you should have had the boss name a hardcore con for every open seat in the Ninth Circuit. If your staffers can’t put a list of candidates in your hand five seconds after you yell for it, fire them.

The cliché is that personnel is policy, and everyone knows that all clichés are true – that’s how they get to be clichés. Back to the Ninth Circuit oral argument fiasco – if one of my second year associates had performed that badly at a status conference he’d return to find his crap in a box. Your boss was embarrassed because there was no Attorney General nor any other appointees in place to make sure that the career liberals infesting that miserable department couldn’t throw the case – whether intentionally or simply because they are terrible. Have you demanded the scalp of whatever pseudo-lawyer was responsible for greenlighting that criminal impersonation of a legal argument? I know it’s hard to fire government flunkies, but nothing says you can’t transfer him away to prosecute littering beefs in a North Dakota national park.

Reince, you are the White House Chief of Staff. People must fear your wrath. Ratchet up your wrath.

Here’s an idea. How about every day you drop ten names of assistant deputies and deputy assistants on the Boss’s desk and get them nominated? How about a judge a day – or better yet, five? If the civil service is slow walking the vetting, get on the phone and deal the pain. And if your own staff can’t keep up, can them and get better staffers. Plant a figurative head on a pike in the Rose Garden and guess what? People will start performing. But what can’t happen again is leaving the President exposed because you failed to staff his administration.

And put a stop to the craziness. LTG Flynn left after he became a distraction, and in the end, it’s not about loyalty or friendship but results (something you should always keep in the forefront of your mind). But the idea of replacing him with David Petraeus is flat out nuts – hopefully by the time this column runs that’s been round filed. Petraeus screwed around with classified info, and we can’t overlook that because of his service. He got credit for his service when he didn’t go to prison like anyone else who wasn’t a Clinton would have. He’s got his own agenda (which is not the Boss’s), his own media buddies (who are not the Boss’s buddies), and he was not there for the Boss during the election. Bringing him inside your organization is like licking a doorknob during flu season.

Plus, he’s anti-gun freedom. Remember how millions of gun owners backed your boss? Hey, save time – instead of going through the trouble of appointing Petraeus, just have the President tweet how he thinks we need more gun control and that the NRA murders children.

Or you can recommend the obvious choice, John Bolton. He’s a civilian, he’s a diplomat, he’s a manager, and he isn’t an insult to President Trump’s Second Amendment constituents. Moreover, no one is every going to accuse The ‘Stache of cozying up to the Kremlin without drawing a tsunami of laughter and an offer of meds. Bolton would make the White House security team go from being a huge problem to an actual asset.

By the way, have you noticed there’s a dam falling apart in California? Wanna guess who gets the blame if it collapses? What have you done to ensure the White House has a response plan ready to go?

We voters are watching, and we are wondering if you are going to empower the President to deliver what he promised. Donald Trump fully understands that the success or failure of his presidency depends upon whether he delivers what he promised. He got off to a great start, but now the initiative is fading and the enemy is regrouping. And that’s on you to fix.

Sure, the light saber dueling part is fun, but the Emperor didn’t need the guy in black to do the hand-to-hand combat. He needed Darth Vader to put unholy terror in the hearts of the dudes manning the Death Star so they could start pulverizing the enemy’s planets. And that’s what you need to do now, because if you don’t, your failure will be complete.