Kurt Schlichter
|
Posted: Oct 24, 2016 12:01 AM
Share   Tweet
The opinions expressed by columnists are their own and do not necessarily represent the views of Townhall.com. 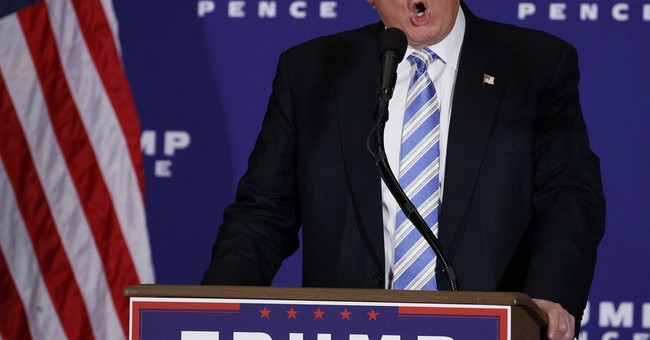 No pearl went unclutched when Trump refused to agree in advance to validate the giant scam that is this election. Yeah, scam. In light of all we’ve seen during this stupidest of years, a year where I had to move my book about this country tearing itself apart from the fiction section to nonfiction, how the hell can anyone keep a straight face as he, she, or xe demands that we default to trust the system?

Okay, this is where Team Fake Pearl Clutch jumps in and whines about my “dangerous talk” and about how I have no “honor” because I won’t submit in advance to another establishment okie-doke. Yeah, sure, whatever – and the emperor caught pneumonia because the little kid pointed out that he wasn’t wearing any clothes, not because he was walking around with his junk in the wind.

The system is manifestly rigged – even Heap Big Chief Warren used to say so until a memo informed her that this meme is now inconvenient – so spare me your sanctimonious crap about our sacred system. Our loyalty is properly only to the Constitution, not a perversion of it. Just because you hold office under Article I, II, or III doesn’t mean we still owe you respect or deference when you treat your obligations to the People like a teenage Thai boy at one of Raymond Burr’s Halloween parties.

We owe the system nothing. Nada. Zip. Instead, the system owes us fairness and honesty, and without them it has no right to our default acceptance of its results. That acceptance must be earned. This means that the system must aggressively police its own integrity, and this year it has utterly failed to do so.

The most important thing in a democratic republic, the keystone that holds it together and ensures the peaceful transition of power, is the ability for a loser to accept a loss. We used to be able to fight out our political differences and, if we came up short, shrug and say, “Well, next time we’ll convince a majority.” We could move on, confident that the playing field had been level, that we had been heard, and that we had lost fair and square.

"Not anymore. Trump’s wrong about a lot, but he’s not wrong about this. He may very well lose, but it won’t be fair and square. And Trump is not the problem for saying so.

In a sudden and shocking burst of coherence during the third debate, in which Trump put a cherry on top of his brutal trouncing of his Westworld-escapee opponent by refusing to agree to be scammed, The Donald articulated a three-point critique of the system that its defenders have not even tried to answer. Instead, all we got was fake outrage over Trump’s perfectly legitimate rejection of the default legitimacy of our illegitimate system.

His first point was that the media is not merely biased but an active partisan player for the Democrats. The media ignores what hurts the left (remember the 24/7 coverage of Project Veritas? Good times) and plays up nonsense that helps it (remember the 24/7 coverage of Chubby de la Cartel Chica? Bueno times). The media, as it loves to crow, is a vital component of the system, but only when it at least pretends to be objective. By going full Goebbels – never go full Goebbels – it undercut and wrecked the foundational ability of all citizens to be heard and respected and to believe that they are competing on a level playing field. If you aren’t one of the mouth-breathing drool donors in love with Hillary, do you feel you’ve been heard or respected? Do you believe Trump has been able to compete on a level playing field?

Then there is electoral integrity. We’ve seen numerous investigations of voter fraud and no one cares. We have one party refusing to clear voter rolls of ineligible voters, while also on a quest to ensure that no one need prove his identity to vote. Sure, Democrats have good reason to believe their voters are too lazy and/or stupid to obtain ID cards, but we all know why they really oppose voter ID: it makes it harder to cheat. And then there’s Project Veritas. We have a Democrat party operative and the husband of a sitting Democrat congressbeing caught on tape proving Democrat catspaws paid to cause violence at a Trump rally, violence which the media covered and blamed on Trump to damaging effect. And this guy went to the White House hundreds of times and frequently met with President Faily McWorsethancarter.

So we’re supposed to take it on faith that the votes are going to be counted fairly? Uh huh, sure. If you think Trump is somehow morally obligated to preemptively give up his right to challenge the result after that, you can kiss his hanging chad.

And then there’s the corruption of the rule of law. Trump was right – Hillary should not even be running because if we had a single justice system – instead of one for the powerful and connected and another for everyone else – her unhealthy carcass would be in federal prison. That’s not hyperbole – that’s literal truth understood by anyone who worked with classified materials and/or actually passed a bar exam. Then there is the IRS persecution of conservative organizations that has gone totally unpunished. And, of course, the Wikileaks treasure trove has shown that the Democrats simply ignore the law in their campaigns, secure in the knowledge that they will never be held accountable while their opponents will see a weaponized FBI and DOJ turned upon them.

The system is rigged.

It would be nice to be able to say, “Well, she won fair and square.” But that’s not going to happen. My gut says that a majority of people will vote for her, but I live in Los Angeles and a lot of people around here are libfascist half-wits, so maybe my perspective is skewed. Maybe the polls are right – you know, the super scientific ones putting the race somewhere between Felonia von Pantsuit up 12 and Trump up 3. But this election won’t be “fair” in any sense of the word. The media has put not just its thumb but its bloated behind on the scale. All of us have not been heard, much less been respected. How can we trust the votes will be counted fairly when clearly documented admissions of election tampering get a mere shrug if they aren’t ignored entirely?

Sorry (not sorry), but like Trump, I refuse to be a good little boy and politely agree in advance to accept whatever the ruling class chooses to do without protest or complaint. You want us to respect and honor what you say are the results of the election? Start by respecting and honoring us.

Is this dangerous talk? Hell yes – but the danger doesn’t come from us pointing out the corruption. The danger is the corruption. I walked through wrecked villages in the aftermath of a civil war, so I sure as hell don’t need your lessons about what lies at the bottom of the slippery slope your ruling class is tobogganing down. I know – and as my new book predicts, it’s really bad. But the solution isn’t to try to shut us up when we dare point out the truth – nor will it work. As the hep kids say, we are now hella woke. The solution is to demand the system do its damn job and root out corruption and earn back the default acceptance we would love nothing more than to be able to offer again, confident that the system is unrigged. Too bad if our refusal to simply acquiesce to your scam is inconvenient.