The Real Russian Threat Is Not a Military Threat

Kristofer Harrison
|
Posted: Nov 20, 2018 12:01 AM
Share   Tweet
The opinions expressed by columnists are their own and do not necessarily represent the views of Townhall.com. 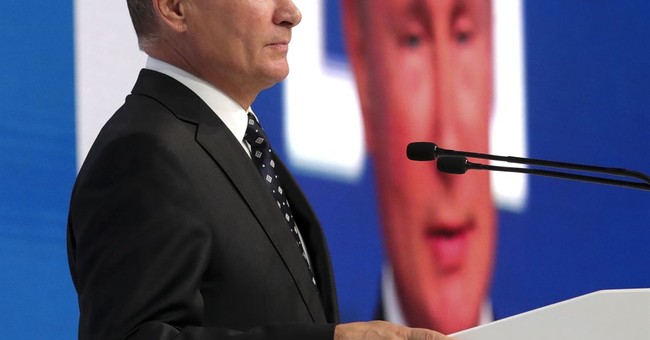 President Trump often repeats long-held U.S. policy that NATO members should increase their defense budgets, and—clearly—Russia is the threat.  But Russia’s threat comes not from its decrepit joke of a military, but from its brazen political meddling.  While its smoke-belching aircraft carrier and tugboat sister ship do indeed distract, things like pro-Russia politicians and shady Russian meddling are the real threats.

For example, the Czech Republic, though home of the brave dissidents of the Velvet Revolution and a critical NATO ally, it demonstrates the smothering results of unfettered Russian meddling.

The shambolic Czech President Milos Zeman is pretty much assumed to be a Russian stooge.  Recently, the Speaker of the Czech Chamber of Deputies and a very close ally of Prime Minister Andrej Babis, Radek Vondrácek, visited Moscow with the goal of re-establishing relations with the country attacking his.   Czech Defense Minister Lubomir Metnar co-founded a pro-Russian, anti-EU and anti-NATO group called Security, Responsibility, Solidarity (in Czech, BOS for short).  On its Facebook page, you will run across a certain Russian theme:  “Americans are behaving as pigs...They started wars out of their arrogance and greed, interference in the EU, and now they're sharpening their teeth for the Russians in order to drag Europe into a violent conflict."

The Czech Parliament’s Security Committee chair, Radek Koten, is known for spreading Russian conspiracy theories.  Zdenek Ondracek, a former chairman of a parliamentary committee that oversees the police forces was once a member of a Czechoslovak Socialist Republic’s police unit that beat anti-Moscow protesters. Oligarch Prime Minister Andrej Babis has long wrestled with his collaborationist past. And on and on…

Their individual actions tend to be even more troubling.  For example, Minister Metnar recently took a vehicle contract away from one company and gave it to another that Czech authorities had denied a security clearance—boring bureaucratic minutiae.  But the new vendor selected by Metnar is simply a sister company of the initial vendor.  Worse, the Organized Crime and Corruption Project reported that just two companies linked to the owner of the above vehicle vendors made two thirds of the political donations to Zeman’s reelection campaign.  The Czech media reported that criminal charges were filed against Babis for illegally disclosing classified information in another case.

The pattern is obvious.  The alliance should be asking questions.  And defense against it is not the stuff of tanks.

Notwithstanding Russia’s third world reality, President Vladimir Putin would have you believe that it is once again a superpower.  But with the Red Army a rusty relic, Putin must rely on political interference, corruption and information warfare to remain relevant.  Prague exhibits the results.

This is not just a Czech issue, so where is NATO? Prague is just one result of unchecked Russian meddling. Just this week, non-NATO member Finland finally began reacting to shady Russians buying 17 properties near military bases.  Why did it take 17?  Why no reaction after 11?  Four?

Clearly, none of this triggers NATO’s Article V, but, at the same time, it is how Putin is attacking NATO and the West.  It is a mutual defense issue, but it is not one that bigger defense budgets will do anything about. Tank battalions will not defend against Russia’s political interference.

Within existing budgets, we can shine daylight on Russian-sponsored corruption and political interference like what we see in Prague.

For example, the Czech Republic has a feisty press.  Feed the beast.  If Metnar is helping Russia skirt Czech—and thus NATO—security clearance safeguards, the alliance must address it. Help Czech media investigate it.

An added benefit: spotlighting instances of Russian malfeasance and corruption-mongering will throw a wrench in Putin’s entire foreign policy because it is all he has.  By all means, increase defense budgets, but information warfare, political meddling and corruption are fought with information, not tanks.  The Baltic States, particularly tiny Estonia, are perfect examples of how effective a focused effort can be. With their limited resources, they are bedeviling Moscow.  Just think of what we could do with a tiny fraction of what we spent reactivating the Second Fleet, which, for some reason, we thought necessary to defend against Russia’s smoking, jalopy of an aircraft carrier?

Russia will not be satiated by scrambling Prague, but it should present the West with a cautionary tale of what happens when we ignore the real Russian threat.  Prague bravely resisted Moscow and paid a heavy price in blood over many years to regain its freedom.  Now, it is overrun with Russian goons unraveling the Velvet Revolution. We have done that bravery a disservice, and we are less safe because of it.