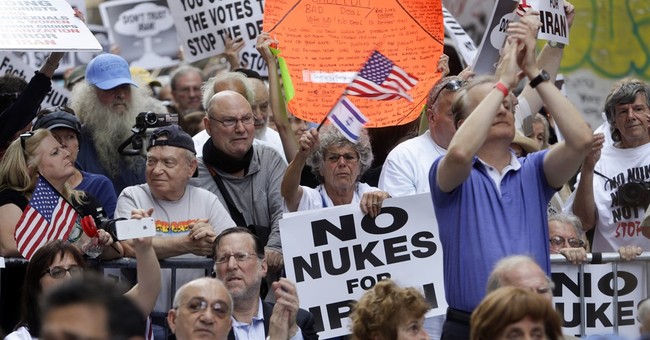 Caroline Glick is a columnist for the Jerusalem Post. Raised in the U.S., she made Aliyah several years ago and now lives and writes in Israel. Caroline Glick spoke to a huge “Stop IRAN” rally in New York City in late July. She passionately appealed to Sen. Chuck Schumer (D) and Reps. Jerry Nadler (D) and Elliott Engel (D). She publicly demanded they oppose the Iran nuclear deal negotiated by Sec. of State John Kerry. “If you are men of honor,” she said, you must oppose this dangerous deal. At a time when Chuck. Schumer’s office was saying the designated future leader of Senate Democrats was carefully analyzing the details of the deal, Caroline Glick boldly told him not to immerse himself in the details, but to look instead at “the big picture.”

There are only two things you need to know, she said. ONE: This deal will give $150 billion in sanctions relief to the Mullahs who are the leading terrorists in the world. TWO: This deal lets Iran have a nuclear weapon in just ten years even if they don’t cheat.

You can read the full 159 pages of the Iran deal—formally called the Joint Comprehensive Plan of Action—in a number of online sites. But we agree with Caroline Glick. The devil is not in the details. He is sitting on top of the signed agreement in plain view. Terrorists get funded to the tune of $150 billion and Iran gets the bomb.

In making her speech, Caroline Glick violated many of the rules that media mavens give us. Her voice rose. She became vehement, almost shrill, in putting her case before the Members of Congress and their staffs. She urged her listeners to bombard these Members with phone calls and emails. She almost seemed to threaten the Members with electoral consequences if they failed in their “duty” to be men of honor and to stand for “decency.” Still, for all that, she was right.

Within days, Sen. Schumer’s office announced that he would oppose the Iran deal. And several leading House Members followed suit. In leading liberal sites, writers like Leon Wieseltier (longtime editor of the New Republic) joined the chorus of dissenters. Seeking to broaden the anti-deal coalition, Wieseltier asked: “What democrat, what pluralist, what liberal, what conservative, what believer, what non-believer, would want this Iran for a friend?”

Indeed. It is not yet clear whether, even with this rising storm of opposition to the Iran nuclear deal, the defenders of American national security and the friends of Israel will prevail. But it is clear that the passion of these advocates is having an impact.

We need the same passion in our pro-life opposition to the funding of Planned Parenthood. We need to enlist fiscal conservatives, to be sure, as well as social conservatives. How can it make economic sense to fund an outfit that kills hundreds of thousands of unborn children each year and scavenges their organs for sale? Each one of those unborn children could earn a million dollars if allowed to live. Liberals, too, should join our fight. The half a billion dollars in taxpayer funds could easily be reallocated to the more than 13,000 health centers across the nation that provide a broader array of health services than Planned Parenthood. Black and female babies are disproportionately condemned, always unjustly, for death. Columnist George Will proclaims himself an “amiable atheist,” but he unhesitatingly condemns Planned Parenthood’s cannibalizing of organs from its little victims. He calls it “barbarism” because that’s what it is.

The media is questioning Sen. Schumer’s timing. Democrats, according to the New Yorker are wondering why their soon-to-be Senate leader Chuck Schumer chose August 6th to publicly make his opposition known. He announced too early for the deal’s backers, too late perhaps for its opponents.

Quite possibly it was a statement made on just the right day. August 6th was the 70th anniversary of the dropping of the atomic bomb on Hiroshima. That should concentrate all our minds. And we should remember that Planned Parenthood each year destroys more human lives than were lost at Hiroshima and Nagasaki.