Forbes Backtracks Threat to Trump Officials—But Is It Enough?

Kelsey Bolar
|
Posted: Jan 22, 2021 12:01 AM
Share   Tweet
The opinions expressed by columnists are their own and do not necessarily represent the views of Townhall.com. 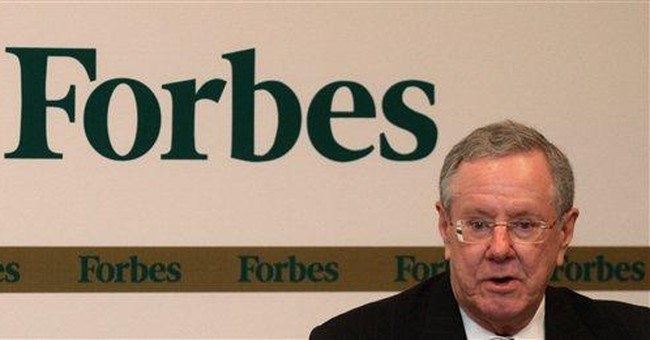 Steve Forbes, editor-in-chief of Forbes, is pushing back on a controversial op-ed published by his namesake magazine that threatened to use its powers as a media entity to cancel companies that hire former Trump administration officials.

In the op-ed, Lane issued an explicit threat to companies: hire former Trump administration officials, and Forbes will come after you.

“Let it be known to the business world: Hire any of Trump's fellow fabulists above,” Lane wrote, referring to Kayleigh McEnany, Kellyanne Conway, Sarah Huckabee Sanders, Sean Spicer, and Stephanie Grisham, “and Forbes will assume that everything your company or firm talks about is a lie.”

“We’re going to scrutinize, double-check, investigate with the same skepticism we’d approach a Trump tweet. Want to ensure the world’s biggest business media brand approaches you as a potential funnel of disinformation? Then hire away.”

Mr. Forbes defended publishing the op-ed, but pushed back on the content. He said:

“This is reminiscent of what we had in the 1950s during the McCarthy era. … We're not going to have blacklists and the like. People can express opinions. Unlike other organizations, we do have diverse opinions at Forbes, and we value those diverse opinions. That shows strength, not weakness.”

It’s encouraging that Mr. Forbes condemned the intimidation expressed in his namesake publication, and that he articulately warned of the dangers of a modern-day McCarthy era. It’s also reassuring that Mr. Forbes defended his publication’s ability to publish diverse opinions. That’s something The New York Times, for example, lacks.

At The New York Times, staff had a meltdown after publishing a commentary by Sen. Tom Cotton calling for federal law enforcement to stop the streak of riots in U.S. cities last summer. The op-ed was apparently so radical, New York Times staffers and online mobs claimed it was “painful, even dangerous,” and forced editorial page editor James Bennet to step down from his position. Now, of course, those same people want federal law enforcement to shut down violent mobs who stormed the Capitol and are now threatening President-elect Joe Biden’s inauguration—and rightly so. But at the time, they said Cotton’s opinion was beyond the pale.

Sen. Cotton, of course, didn’t work for the Times when editors published his controversial op-ed. Lane not only works for Forbes, but acts as its chief content creator, overseeing the direction of the magazine’s entire editorial content. In his op-ed, Lane didn’t tell businesses that he—Randall Lane—would investigate them. He told them “Forbes will assume that everything your company or firm talks about is a lie,” and said, “we’re going to scrutinize, double-check, investigate.”

By the context of his writing, it’s clear that Lane wasn’t speaking on behalf of himself, but rather, the entire publication.

Worse, as of Thursday, Lane was still promoting his op-ed onTwitter and targeting not just the high-profile “fabulists” he named in his piece, but lesser-known former Trump administration staffers who landed jobs in the private sector.

Lane should think twice about heading down this dangerous path. In fact, he might even take the advice of President Joe Biden in his inaugural address: “Politics need not be a raging fire destroying everything in its path. Every disagreement doesn’t have to be a cause for total war.”

“One of the things that we have to do going forward is try to tamp down temperatures,” Mr. Forbes rightly said. Ensuring that his own employees don’t actively participate in pressure campaigns and blacklists would be a good place to start.