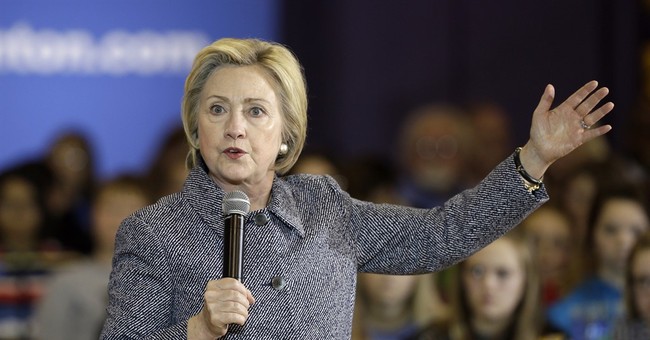 For over 40 years, Hillary Clinton has been pushing to put women in combat and now she’s close to succeeding—whether women like it or not.

Your daughter or granddaughter could soon be compelled to register with the Selective Service at the age of 18 alongside all American males. Today, I’ll share what you need to know to confront Hillary and Obama’s unconstitutional and unscientific approach to fighting the phony War on Women and the real War on ISIS.

In 1975, at the age of 27, Hillary was the newly-married wife of Bill Clinton and a law school teacher when she claims to have been rejected by a Marine Corps recruiter because of her age and because “you're a woman.”

The New York Times reported in 1994 that Hillary: “said that ‘it was not an isolated situation’ for women to be turned away by military recruiters. And she lauded efforts to bring women into more aspects of military service.” Translation: Hillary thinks a woman’s place is on the front lines.

Despite the fact that she was zealously anti-war as a college student, Hillary continues to bemoan the fact that the Marines shunned her. You begin to suspect that her story is a political ploy to make female voters think she is pro-woman.

There is a very real chance that your daughter or granddaughter would face an equal chance of being drafted as your son and grandson if Hillary becomes president. Besides repeatedly mentioning her Marine rejection story, Clinton persists in praising President Obama—whose administration is pushing hard to put more women on the front lines.

“I'd give him an 'A,’” Hillary has said of Obama’s job performance. She recently praised the president as a global “leader” on foreign policy who has her “support” to keep American forces in Afghanistan for what now looks like perpetuity.

Obama’s Defense Secretary Ashton Carter is predicted to make a decision in January that would force the Marines to allow women in all combat roles. Far from empowering women, this move is scientifically proven to hurt women.

Ashton Carter, Hillary Clinton and Barack Obama share one thing in common: they never served in the military. This may be why they dismiss the Marine Corps’ 9-month study on the impact of expanding the role of women in combat. The study’s results are eye-opening. In nearly three quarters of events (69%), all-male squads outperformed mixed gender squads. Negotiating obstacles, casualty evacuations and long hikes under load were exponentially more difficult for women.

I interviewed a recently-retired Navy SEAL who told me that he would be fine with women joining the SEALs on one key condition: that they be able to pass the exact same tests as the men. Realistically, there is no way to get droves of women to become Rangers, Marines or the SEALS unless we lower our standards.

Women have many wonderful abilities that men lack, including the ability to give birth. But females in the military have around a third less muscle mass and at least ten percent more body fat than the males, according to recent Army data. Men are significantly faster and stronger than women, shows military study after study.

40 percent more women than men who serve in the military today are hospitalized (even accounting for pregnancy). Expect this percentage to skyrocket if more women assume Marine combat roles.

Much ado was made when three women managed to pass Ranger School on their third try. Countless more men—including my own cousin—passed Ranger School without first failing to pass twice. No one in the national media noticed.

We wouldn’t ask golf star Jordan Spieth to miss a few putts so as to “equalize” the playing field in a hypothetical co-ed Masters Tournament. Why support poor sportsmanship when the stakes are far higher than a green jacket?

We’re at war with ISIS, folks. Thugs who enjoy murdering innocent people via explosive necklace; beheading and suicide bombing. It is unethical to push women into the toughest Marine combat roles knowing they have a 69% greater chance of failure than men. Because, in war, mission failure often means death.

Harvard just released its 2015 poll of Millennial views on foreign policy and the results show that 85% of young people, men and women both, have no interest in enlisting. 62% of Millennials said they would “definitely not” and 23% said they would “probably not” join the military to combat ISIS.

Your daughters and granddaughters are at risk of being drafted in a war against ISIS that only 4% of young people tell Harvard researchers they would “definitely” consider fighting.

It would be demeaning to both men and women; a waste of taxpayer dollars; and a national security risk to give women shortcuts to the front lines in the name of “gender equality.” Or, in the words of the Marine Corps study: “a prescription for failure.”

Share this column, educate Millennials about the Clintons’ views on foreign policy, and urge Defense Secretary Carter to side with the Marines and keep harsh combat roles closed to women. Don’t let Hillary have the opportunity to draft your daughter as she moves up the political ladder.