Dems Upset Culture of Life, No Matter How Likable They Are 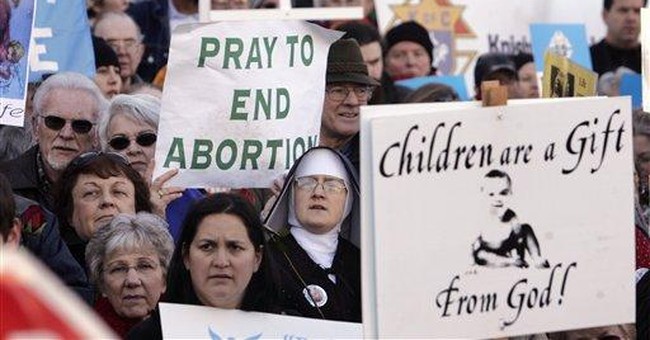 There is nothing like the prospect of losing to focus one's mind. That might explain the dynamic at work in the East Room of the White House on the 35th anniversary of the Supreme Court decision that legalized abortion in the United States. After President Bush's brief remarks, the first response I heard from pro-life leaders and activists was, "Wow." And the second. And the third. The president was interrupted by applause so often he was barely able to deliver his remarks. And once it was over, he was so electrified by the crowd that he worked the room as if it were a political rally -- something I've never seen at one of these quick, official, fairly routine events.

Across town an hour or so later, another pro-life gathering was being held at the Family Research Center. Here, Bush was being criticized for his lack of leadership -- there is more he could be doing, more he could have done. Fair enough. Each of the leading presidential candidates was also criticized for having either that same lack of leadership or a hostility to the anti-legal abortion position.

In separate conversations about the state of the presidential race, multiple well-informed conservatives told me of their affinity for Barack Obama. He's a likable guy. He has a sense of humor. He has a beautiful family. They hate the dirty tactics of the Clinton campaign against him -- using his middle name, Hussein, against him; whispering untrue rumors about his past; trying to hang him on confessions about his past.

All of this, understandably, makes Obama a rather sympathetic figure.

However, when pro-life conservatives flirt with a Democrat and beat up on Republicans -- including a president who has promoted a culture of life -- they ignore the stark political realities they face this cycle. I know I have also done my share of criticizing. There are some real concerns for a pro-lifer when looking at Rudy Giuliani, who is unapologetically pro-choice, or John McCain, who supports embryo-destroying stem-cell research. However, I also know what the alternative would mean.

While in the Illinois legislature, Obama voted "present" on a Born-Alive Infants Bill. What this means is that when he, as a state legislator, was presented with the reality that babies who had survived abortions were being left to die, he would not raise his hand to provide those children legal protection. His reason: He didn't want to cede ground to crazy pro-lifers. He warned: "Whenever we define a pre-viable fetus as a person that is protected by the Equal Protection Clause or the other elements in the Constitution, what we're really saying is, in fact, that they are persons that are entitled to the kinds of protections that would be provided to a -- a child, a 9-month-old -- child that was delivered to term. That determination then, essentially, if it was accepted by a court, would forbid abortions to take place."

This floors his opponent in the Democratic primary, Hillary Clinton. She is outraged, however, not in the way someone devoted to human rights and protecting the most vulnerable would be, but in the way a radical, pro-abortion feminist would be. How dare he not oppose the bill. "A woman's right to choose ... demands a leader who will stand up and protect it," one Clinton-mailing said.

The fact of the matter is, if you oppose abortion, you want a president who is committed to protecting the lives of the most vulnerable among us. You're free to complain that Mitt Romney was once on the other side even if he's since led on life issues and better articulated his reasons for why he opposes "Brave New World" projects, like Harvard's effort to clone, than most politicians are able to. You're free to complain that Bush should have done more, that the Bush administration didn't demonstrate as much proactive leadership as you'd like. But know that the White House will not be an incubator for a culture of life if Obama or Clinton becomes president. Remember that in the last Clinton administration, a ban on partial-birth abortion was vetoed three times. Know that even Rudy Giuliani says he will not overturn the Hyde Amendment, which forbids federal funding of abortion -- that's something, compared to the Democratic alternative. Know that neither an Obama nor a Clinton administration will invite pro-life marchers to the White House on the 36th anniversary of the Roe v. Wade decision and declare, as President Bush did on the 35th: "We aspire to build a society where each one of us is welcomed in life and protected in law. We haven't arrived, but we are making progress." To the country, at a time when public opinion is turning as Romney did, there are clear choices. A President Clinton or Obama would be a big baby step backward.