Joy Overbeck
|
Posted: Apr 26, 2016 12:01 AM
Share   Tweet
The opinions expressed by columnists are their own and do not necessarily represent the views of Townhall.com. 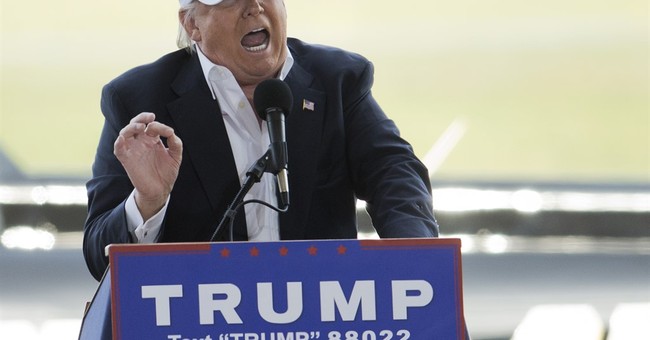 Donald Trump and his henchmen are very worried that his delegates will jump the Trump train after the first ballot in a contested Republican convention and support another candidate when they are free to vote their conscience on the second ballot. With words worthy of a third-world dictator, the candidate himself warns of “riots” and “very bad things” if he doesn’t get the nomination, even if he is 100 votes short of the majority 1237 required.  Aware that 65 percent of Republicans say they won’t vote for him, Trump is already setting up a violent scenario if he fails to win.

Intimidation is his only strategy fallback. Former Trump campaign manager and longtime pal Roger Stone promises to reveal delegates’ Cleveland hotel room numbers, urging trumpsters to “visit their hotel and find them;” i.e. to storm their rooms. And then what -- shake hands and have a beer?

The bully plan is already afoot. In Colorado and other states he lost, Trump’s outrageous lies about “rigged” and “corrupt” delegate selection, and the media’s sensationalism-addicted collusion in spreading those lies, have incited his troll troops to unleash a barrage of menacing phone calls, sinister post cards, and even death threats on the convention delegates elected fair and square by the people of their states.

There’s even at least one website by a Trump fanatic named Gary Forbes, CEO of something called The Forbes Group, that lays out a detailed man-the-barricades blueprint, instructing hundreds of trumpsters to camp out on the home lawns of delegates they think may “betray” their candidate by voting for another.

Rants Forbes, “By defying the will of the American people, these groups must be deemed traitors to our country. We must declare that their betrayal is an act of war against us. For those of you who are a bit reticent to do so, I will remind you that our own Constitution states that We the People can legally overthrow our government if they are tyrannical. Election-stealing is as tyrannical as it gets.”

His agit-prop site orders organizing action teams, including “bikers for Trump, truckers, working class unions, etc.” in each state to “watch” the delegates and compile a database of names, addresses and phone numbers of “at-risk” delegates to send them warning letters and “show the anger and might of the American people.”

Coincidentally, Colorado Republicans have been receiving such missives since the April 9 State Assembly in which Cruz won all 34 delegates via the same caucus process in place for the last 100 years under the laws of the Colorado legislature.

But when Trump and the media accused Colorado party officials of “stealing the peoples’ votes,” the mad dogs who obey their master’s voice pricked up their ears. Immediately someone calling himself @TraitorSteve whose profile featured a photo of the beleaguered State GOP Chairman Steve House, posted on Twitter a list of the names, addresses, and phone numbers of Douglas County officers and  district captains, in charge of usually three to five precincts. Gary Forbes would be proud.

The Twitter page was taken down, but too late. The captains began getting identical printed postcards reading: “#WeThePeople are Millions in Numbers and are Watching Trump Voters wrote to FBI Director Comey to Investigate Your connection to Ted Cruz Pay Off’s. CO Voter Fraud Voter Fraud, Voter Suppression is a Federal Crime You will be Prosecuted if found Guilty FBI and IRS audits and investigations are forthcoming Trump Supporter’s will not be Silent.”

The “We the People” phrase and the “watching” warning echoes much of Gary Forbes’ polemic, though it’s odd that the trumpists would believe Colorado’s Cruz delegates are Trump voters. Run-on sentences, misuse of apostrophes, random capitalization, and allusions to non-existent voter fraud and pay-offs or bribes are also standard in these missives.

Delegates to this summer’s Republican National Convention also got sinister mail and emails, and the Douglas County Chair received phone calls so belligerent that she reported them to authorities.

Quoted in Politico, House says he was warned to hide his family members and “pray you make it to Cleveland.” One unhinged individual called his cell phone and told him to put a gun down his throat. Recalled House, “He said, ‘I’ll call back in two minutes and if you’re still there, I’ll come over and help you.”  Detectives at the Douglas County Sheriff’s office are investigating this and other threats.

Officials in other states that Trump lost are also the targets of trumpster wrath, according to Politico. A party chairman at the Florida meeting says a Trump supporter recently got in his face, promising “bloodshed” if Trump doesn't win the GOP nomination. Like the Colorado harassment, a top Trump advisor posted online the cell phone number of Tennessee state party chairman Ryan Haynes, as well as a message accusing the state party of trying to steal votes. Haynes told Politico he nearly canceled the party’s delegate selection meeting after the onslaught of sinister messages and threatened violence.

Threats can be very effective, as Haynes and the Trump machine know. According to an April 19 RedState article, New Mexico’s Republican party has altered its delegate-selection process to appease the Trump campaign. The party will give delegate nominees two extra weeks after the April 15 deadline to file the necessary application papers to give the Trump campaign more time to rev up their delegate hunt.

BFF Stone also exhorts trumpsters to mob the Cleveland convention to prevent what he calls “the big steal” of Trump delegates.” Don’t let the big steal go forward without massive protest. Peaceful, nonviolent protest. So, as they used to say, don’t wait for orders from headquarters. Ride to the sound of the guns,” he continued, adding the laff-worthy disclaimer, “I don’t mean to imply violence on that.” Right:  guns, but not violence.

This dangerous agitation could be stopped with a single word from Donald Trump. As long as he ignores the third-world-type insurgency he has inspired, the longer this will go on. But when CNN’s Wolf Blitzer asked him, “Will you unequivocally say to your supporters you don't want any violence -- you don't want any riots at the convention?" Trump dodged: "Of course I would…But I have no control over the people…”  You have total control, Mr. Trump, and we all know it. Call off your mad dogs, now, before things get really ugly.

Joy Overbeck is a Colorado journalist and author who writes for Townhall.com, The Daily Caller, The Washington Times, American Thinker, BarbWire and elsewhere. More columns: https://www.facebook.com/JoyOverbeckColumnist Follow her on Twitter @JoyOverbeck1